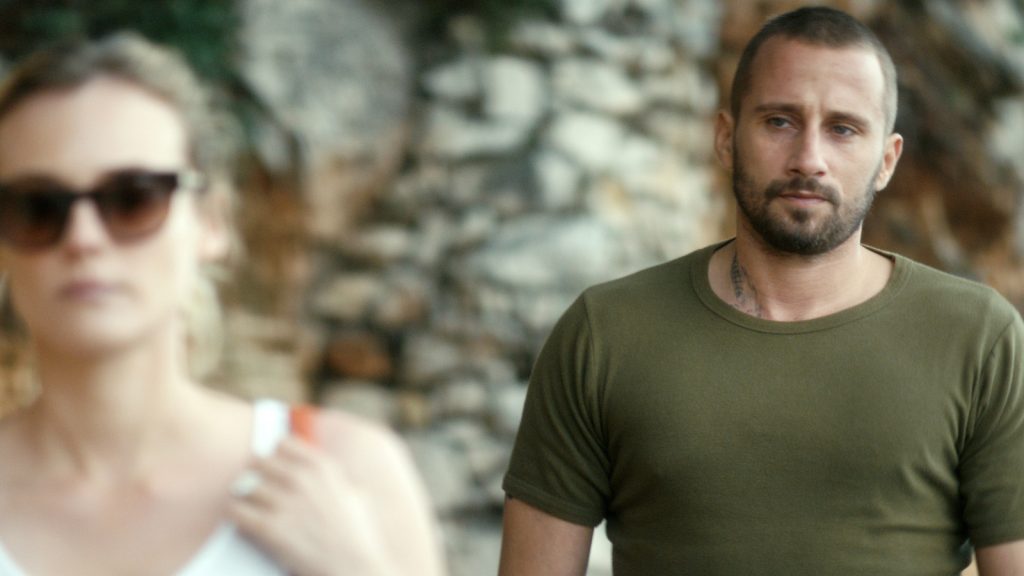 Alice Winocour’s second feature, “Disorder,” is a tricksy thriller of formal ingenuity and feral fearfulness. Winocour, who co-wrote Deniz Gamze Erguven’s bristling Turkish girlhood fable, “Mustang” (2015), turns to the dark side with a story of Vincent, an Afghan war veteran (Matthias Schoenaerts, “Bullhead,” “Rust and Bone”) who takes a gig as bodyguard to the child and wife, Jessie (Diane Kruger, “Inglourious Basterds”), of a Lebanese businessman who live in a palatial home in Cap d’Antibes. (It belongs to Madonna.) The score by techno artist Gesaffelstein is skull-rackingly appropriate for the paranoia that ensues as Vincent masks aftereffects of his experience. Vincent’s paranoia, which seems to be fueled by PTSD, motors the tension and fright, even when the contours of cat v. mouse shift seismically. “A sensation of collapse, of chaotic elements in chaotic times” is Winocour’s own description of her alarmingly sensuous thriller. Her attention to sound is gripping, nailing the narrative to Vincent’s point-of-view, the audience sharing his hyper-attentive subjectivity. The surfaces are chaotic and subterfuges compound. “It was really my intent to be in a single point of view and to have a truly sensorial and physical relationship with the character—to understand only what he understands, to hear only what he hears, and to have the same vertiginous feeling as he does toward reality, Winocour told Film Comment at Cannes 2016. “We did a huge amount of work on the soundtrack to achieve this distortion of reality… Everything resulted from this overarching formal conceit, and it gave the film a radicalism that I found interesting. But my essential concern was to capture this climate of fear and disarray in a world that is becoming more and more incomprehensible. I put all my fears in the film, my fear of the dark, of storms, etc., but also all the fears of contemporary life: the continuous flow of information, the fact that we have the impression of witnessing everything but at the same time of being completely powerless.” “Disorder” is a gutsy ride, and the brooding Belgian Schoenaerts’ every motion onscreen is powerfully compelling. 98m. (Ray Pride)