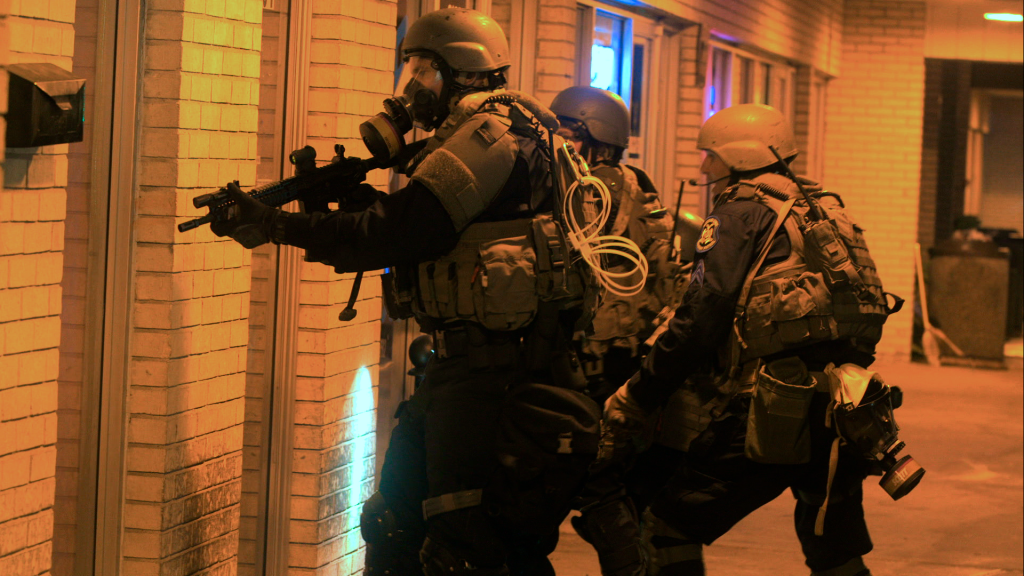 Craig Atkinson, a co-cinematographer of the keenly stylized “Detropia,” takes a piercing, panoramic look at the federal government’s purposeful yet potentially cataclysmic militarization of local police departments. What began as a costly experiment in shedding military material in the never-defined “war on terror” morphs into a war on citizens in the streets of cities and towns of America. Atkinson spent two years in eleven states with an unusual level of access, looking for telling details, and it opens on footage in Ferguson, Missouri, lightning silently branding the night sky behind the occupying force brandishing weaponry. The streets are filled with protesters, chanting, “Hands up, don’t shoot!”

Atkinson segues from this galvanizing footage to the calm of experts explaining the de-accession process. One radically calm man says the combat vehicles are “comin’ back from overseas—Iraq, Kuwait, Afghanistan—trains come in daily” as we see what seems like mile upon mile of armored vehicles readied for distribution to local cops. “They supposedly have been cleared, you shouldn’t find any human anatomy in there,” the munitions expert continues. “they pretty well purge ‘em out. You’ll find it every once in a while. There’s no way around it, war is war.” The quietest moments are most damning, the serenity of the filmmaking provides gentle contrast to the elemental horror of what Atkinson discovers and describes. These are weapons of war, these are the streets of America. It’s infuriating, and on a big screen, nearly overwhelming. It’s terrifying; it’s terror, Atkinson demonstrates. 72m. (Ray Pride)

“Do Not Resist” opens Friday, November 4 at Siskel. Atkinson will appear at Sunday shows.