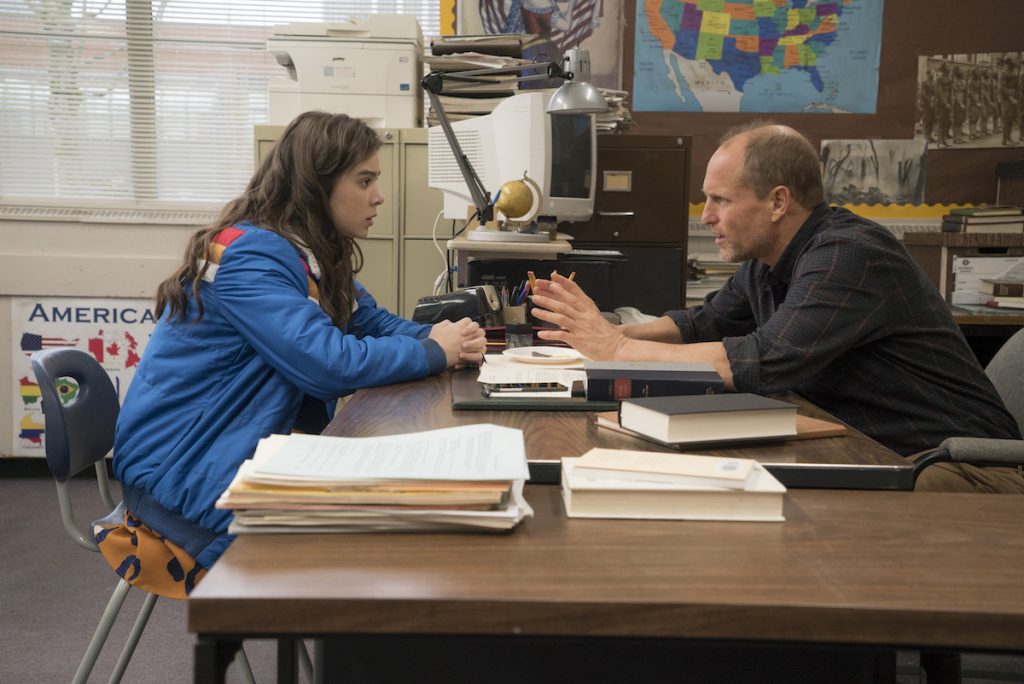 First-time writer-director Kelly Fremon Craig’s “The Edge of Seventeen” is a jittery delight, an anxious, hyper-verbal, edge-of-panic coming-of-age comedy about small social fissures that abruptly erupt into emotional struggle. Hailee Steinfeld plays Nadine, a smart-mouthed but frustrated teen whose life erupts when her lifelong best friend (Haley Lu Richardson) falls for her older brother (Blake Jenner). Widowed single mom Kyra Sedgwick is endlessly distracted, and Nadine’s only other confidant seems to be her history teacher, played by Woody Harrelson. Steinfeld’s poised intelligence is matched by a gift for comic alarm.

Producer James L. Brooks discovered Craig’s spec script, and as he had done with earlier protégés like Matt Groening, Cameron Crowe and Wes Anderson, helped her shape the script into what he now calls “literature.” While the friendship of the two girls is at the heart of the movie, there’s also a well-crafted raft of secrets that each character gets to deploy at the right moment.

When I walked into a Michigan Avenue hotel, in Chicago, to talk with Steinfeld, I observed a batch of intrepid reporters exit. They seemed to be close in age to the actress. I wondered aloud what they told her about the film. “Well, I don’t know that we’ve ever really had a ‘Breakfast Club’ to call our own,” she says, adding that John Hughes’ movie is “obviously called ‘timeless’ for a reason, it’s for everyone at any time at any age. I think they agreed.”

One of the joys of Craig’s movie is how it fits into the sensibility of Brooks’ productions and own work, but also has its own energy. The characters get to swear, say gross things, but more importantly, they’re also allowed to be obnoxious and resentful and irrational and downright needy. But, of course, they’re also driven by the common frustrations and insecurities that comprise the classic American coming-of-age high school movie.

“Yes! It’s honest and it’s real and the language is pretty dead-on for being a teenager today,” says the seventeen-year-old of her first leading role. “And, y’know, obviously, in the hallways of a high school today you do hear what you hear in this movie. I think the idea of working with Kelly and Jim and this cast that they put together around me and before me was just amazing. The whole thing felt special from the beginning. I don’t think I ever wanted to admit it ‘cos you never want to while you’re working. You know when something feels good and you don’t know obviously how people are going to perceive it, or how it’s going to turn out after it goes to the editing room, but you know when it feels good and right. Making this movie, I had an amazing time bringing this character that was already alive on the page to the screen.”

We see in detail how Nadine has an individual relationship with each of the characters, not limited to her mom, her brother and the dynamic with Harrelson’s squirrelly teacher. We see her one-on-one with each of the people in her life, and she’s a different person with each, she’s got a persona with her best friend, with a boy she hits on, then with a boy she doesn’t mean to flirt with. “Each person in this movie has their own story to tell,” she says. “And the fact that it seamlessly connects is what makes this thing so special. It starts at home with mom who’s got her own thing going on and we see that. Her brother and the sibling rivalry. Her best friend is her best friend until something happens, we discover that whole story. The teacher, that’s the father figure who she’s been missing her whole life. She tries to explore and experiment with the whole guy thing… We see every moment happen when it’s happening, you pick up with everyone where you left off. It’s so well-written and thought out.”

And was Brooks at hand some of the time, or all of the time during the shoot? “Double time! He was a mentor, I think, to all of us,” she says, “without even saying much. Any time he stepped in, whether it was something technical, or he had an idea, let’s do one more take, we would try it. He was very trusting in her. He really let Kelly fly. He gave her the extra length on her wings that was already there, and he let her go.”