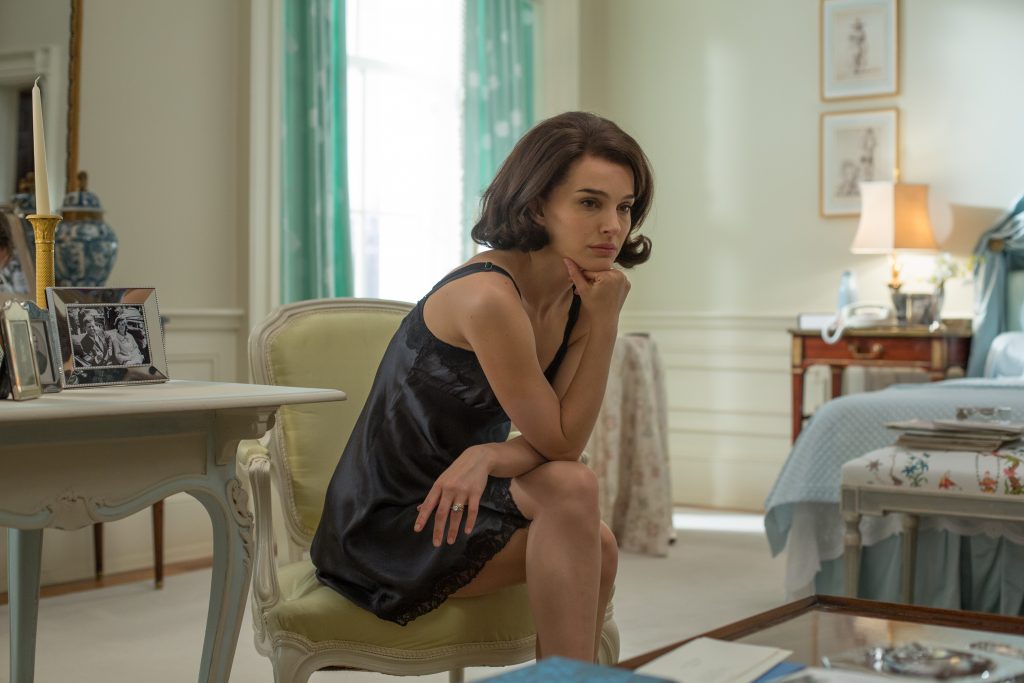 The vivid, even voluptuous chamber drama “Jackie” is Chilean director Pablo Larraín’s second meditation on the life of famed figures to be released this year, alongside the more phantasmagoric “Neruda.” Written by Noah Oppenheim, whose day job is executive in charge of NBC’s “Today” show, the barbed, fictionalized narrative refracts several days in Jacqueline Bouvier Kennedy’s life. The intimate shards include the immediate aftermath of November 22, the day when she must vacate the White House, and several sessions of pointed queries of an unnamed LIFE magazine journalist (Billy Crudup, channeling political scribe Theodore H. White) she jousts with to etch her legacy, as well as that of her late husband. Dazed yet undaunted, grief-stricken but determined, genteel yet steely, Jackie is the role Natalie Portman was born to embody, swaddled in a brilliant skin of a score by Mica Levi. The twenty-nine-year-old classically trained experimental composer’s music, like her work for Jonathan Glazer’s “Under the Skin,” is luxurious yet unnerving, sometimes cacophonous, other times disordered, and nothing less than lovely, even thrilling in its own right, but also piercingly, disarmingly subjective to the trauma onscreen. Portman indicates edginess at any doubt of Jackie’s intelligence or her resolve to seal “Jack”’s legacy, the memory of a moment labeled “Camelot.” Her Jackie is brittle yet bristling.

“Whenever she was examined,” Oppenheim told Deadline’s Mike Fleming, “particularly through a popular culture lens, she was always the betrayed wife, the style and fashion icon. Which, of course, she was, but she had never gotten the credit she deserved for being a public-relations genius and a master of image sculpting. In fact, she was the person who crafted the whole mythology of Camelot, which we strongly associate with Kennedy’s time in office. That was all her idea. I thought, here was this woman, thought of in superficial terms, and no one had ever really tried to look at the substantive role she played in shaping her husband’s legacy.” Larraín works more with sensation than warmth, immersive rather than scrupulously authentic. “Stylish, desirable, sophisticated,” the forty-year-old director has written, “Jacqueline Kennedy was one of the most photographed and documented women of the twentieth century. And yet, we know very little about her. Intensely private and inscrutable, she may be the most unknown known woman of the modern era.” “Jackie” is a bold fantasy about a fantasy about a fantasy, but what does it mirror? How history is made and plundered and sundered and made more wondrous than everyday life. With Peter Sarsgaard as Bobby Kennedy, John Carroll Lynch as Lyndon Johnson, Beth Grant as Lady Bird Johnson, Greta Gerwig, John Hurt. 95m. (Ray Pride)