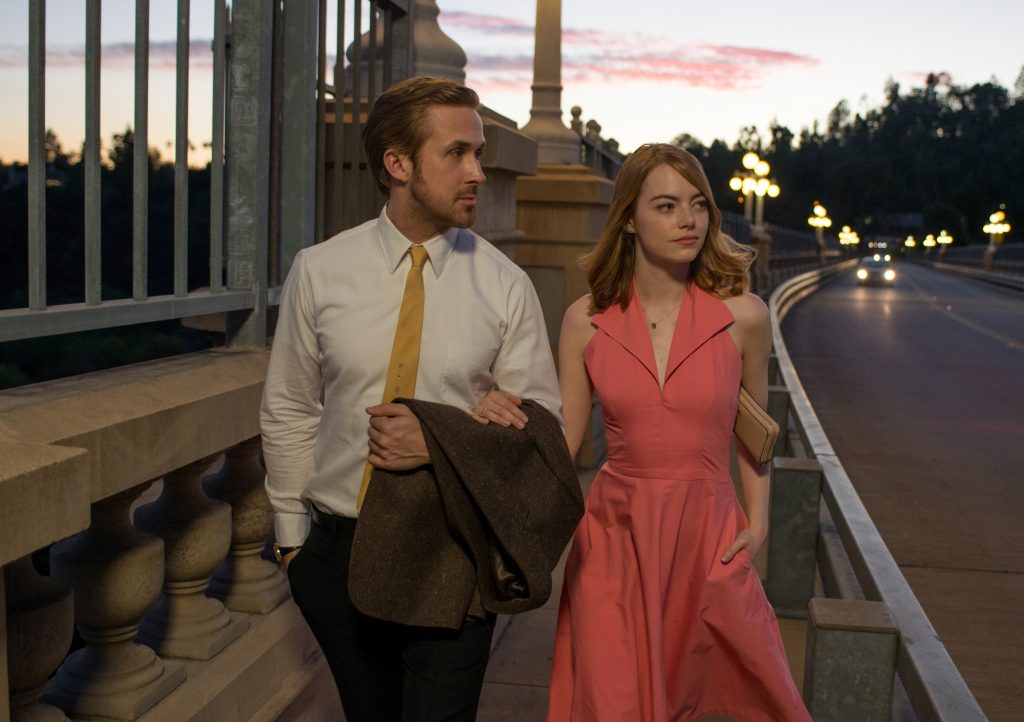 Singing, dancing, dreaming, scheming, loving, losing, holding dear: Damien Chazelle’s third feature, “La La Land,” is a singing-dancing dreamy yet melancholy pastiche of musicals past and perhaps even a precursor of musicals yet to come. There’s a plot, but it’s the dance we all know all too well: lovers on the brink, girl meets boy, boy pursues girl, girl gets away, boy goes away, love comes and goes. Back to one, and repeat. And set in a timeless if contemporary Los Angeles, shot largely during the brief light and bold colors just past sunset known as “golden hour” that’s as fleeting as a stolen kiss.

You pulled it off, you got away with something, I joke to the thirty-one-year-old writer-director of “Whiplash” when we spoke after the Chicago Film Festival premiere of “La La Land” in October. “I got away, yeah! They haven’t arrested me yet.”

I relate a story that goes, Paul Anderson went to dinner at some nice place in L.A. with Warren Beatty after “Boogie Nights,” and Beatty asked, “Well, what do you want to do next?” Anderson says, “I got this thing ‘Magnolia’ I want to do.” “What’s ‘Magnolia’?” Beatty asks. He tells him what “Magnolia” is. Beatty goes, “Oh yeah! That’s your fuck-you movie.” “My fuck-you movie? What’s that?” “Well, you’ve earned your fuck-you movie. Now you’ve accomplished that, you have to make this, or you’ll never be allowed to make it. You’ll never allow yourself to make it.”

“Yeah!” Chazelle says. “The fuck-you movie. I love that.”

But “La La Land” didn’t quite turn out that way. He grins. “There were probably some fuck-yous along the way.”

Toward you, you mean? “Yeah. Mutual! I think the fuck-you element was probably whenever, well, it was the fact that whenever people would ask me, what I was following ‘Whiplash’ up with, I’d say, um, I’m doing this musical, this original musical that my college roommate and I came up with. They would just be like, ‘What is wrong? Fuck. What is wrong with you? Why are you going to waste the precious capital you have now on something that will undoubtedly set you back? To the Stone Age.’ I wanted to say fuck you to those people, yes.”

And to Beatty’s larger point, the worst thing would be if you hadn’t made it now, you might never trust yourself. “That I think is really true. That is a really good point. Even if your career allows you to do the kind of grand folly sort of movie down the line, again, it’s also having to be at a place where you’re early enough in your career that you still go on gut instinct and you’re not overly second-guessing. That probably is the thing that I’m most worried about, that I find myself fighting against the most, with each movie being a little more difficult than the one before. It’s the level of second-guessing, the level of once you’ve gone up to bat, once or twice or three times before, it’s that much more, you have that many more narratives in your head of how it can go wrong. Those are the voices that probably get louder and louder and you have to keep fighting. That’s a really wise thing to say, someone with as long a career as Beatty, who’s speaking from experience, he knows what he’s talking about.”

Beatty recently did a Reddit AMA, and his answer to “Why’dja make ‘Reds’?” was, “Arrogance.” “Arrogance leads to some good movies!” Chazelle says. “It leads to bad movies, too, but it’s a good answer anyway. “

The film critic Stuart Klawans wrote a book called “Film Follies: The Cinema Out of Order.” Chazelle all but guffaws. You know that book? He nods. “The ‘Fitzcarraldo’s, the ‘Heaven’s Gate’s, the ‘Apocalypse Now’s.” And the biggest swoon of them all, I add, Leos Carax’s blighted romantic epic “Lovers on the Bridge.” “Ohhh. Now that’s my favorite folly,” he says, leaning forward. “That’s the greatest. If you like ‘La La Land,’ you’ll love ‘Lovers on the Bridge’!” He laughs. “They built an entire Paris, basically, to do stuff that when you see the movie, you can tell why. It was the most expensive movie in French history to that point and it bankrupted everyone. Except it’s incredible, it’s one of the great movies. I’ve seen every one of his movies.”

At any point, once the cameras were rolling, were you fearful, or did just the effort of filmmaking, day-to-day, prevent you from the second-guess, “Oh, this might just be a mistake”? A pretty big one?

Chazelle laughs. “There was probably enough time to second-guess. There just wasn’t enough time for the second-guessing to ruin things. We talked about trying to figure out the balance, what would keep the movie from just floating off into the air or spiraling into its own rabbit hole of intellectual conceits. That ultimately came down to the actors, it was Ryan and Emma and everyone in the cast, just trying to be in the moment on set at any given time so that any given preconceived ideas I had could be anchored, or counterpointed, or grounded, or whatever by these real people onscreen. That was always our hope. The challenge of this was to make it feel real despite the wildness.”