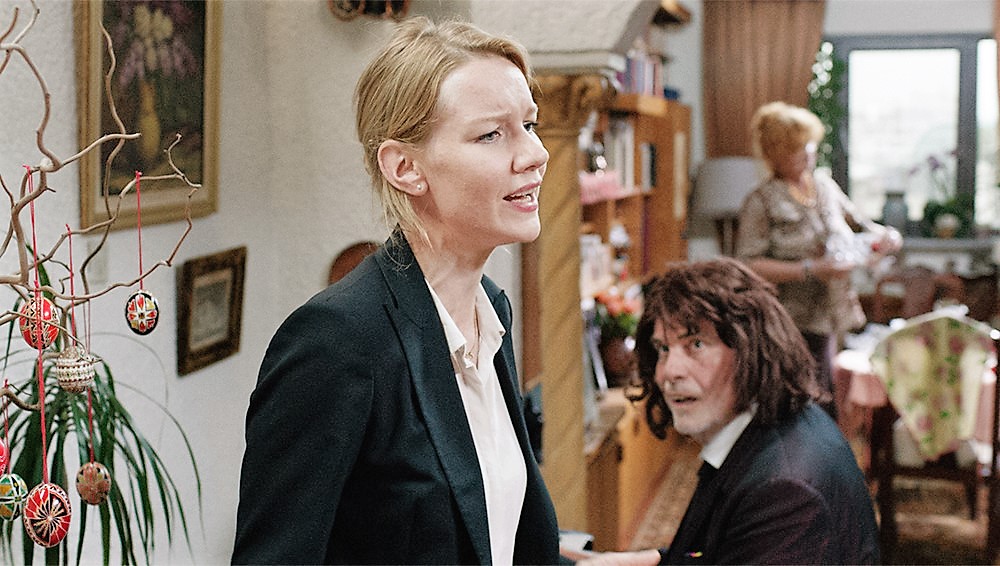 Maren Ade’s third feature, “Toni Erdmann,” is bittersweet and berserk, realist yet surrealist, which, once you’ve absorbed the particulars of the premise, has as many indelible laughs as any movie released in recent months. (It’s also Germany’s submission to the Academy for Best Foreign Language Film.) Beyond a gift for scalding observation of uneasy relationships demonstrated in her earlier features, “The Forest for the Trees” (2003) and “Everyone Else” (2009), the forty-year-old German filmmaker spends ages mulling over her subjects to find a proper tone. Talking to Canada’s Cinema Scope magazine, Ade quickly cops to the source of her inspired, loving but lunatic drama and comedy: “I spent a lot of time with Andy Kaufman on the internet, because it took four weeks to Google everything about Andy Kaufman.” Winfried, a shaggy middle-aged divorcee and music teacher (Peter Simonischek), and unrepentant trickster—bereft when he loses his last music student, followed soon by the death of his dog—decides to prank his workaholic daughter, Ines (Sandra Hüller) who works as a corporate strategist to foreign businesses in Bucharest that engulf and devour inefficient Romanian businesses. Ines doesn’t appreciate Winfried’s dad-humor jokes and cracked humor returning to her life, and after mortifying run-ins during her daily life of meetings and meet-ups in hotel bars, she ships him back to the homeland. Winfried vamooses but not entirely. Enter “Toni Erdmann,” his alter ego, with a ridiculous Three Stooges-like wig and gnarled joke buckteeth. Toni presents himself as a “consultant and life coach” to her CEO and despite his ridiculous countenance, moves in on her life. Ines is shocked, and Hüller, a pale blonde with ice-clear blue eyes, can express any instant between horror and humiliation with farcical exactitude. Simonischek, on the other hand, captures both the intelligence and casual cruelty of Toni with the gentleness of Peter Sellers’ Chance the Gardener in “Being There” as well as many a random brainwave of Andy Kaufman’s Tony Clifton. Working in a superficially realist style, with eruptions of strange behavior and unforeseen insights, Ade also approaches the stratosphere of surrealist provocations by Luis Buñuel, not limited to his double-Oscar-winning “The Discreet Charm of the Bourgeoisie” (1972). In the spirit of Buñuel, Ade offers up her own nightmarish dinner party, a slow-motion nervous breakdown that will not end; a raft of symbols that fairly shout but don’t lurch toward needful interpretation; and a blunt sex-and-food consensual act that goes way beyond not giving a damn. But the grace of Ade’s filmmaking across its glorious, necessary 162-minute running time, is that Ines at one just-perceptible moment decides the game is on. Whatever fresh horror Toni thrusts into her way, she then absorbs and attempts to counter. There are many comic setpieces, from family terror to absurd yet emotionally fluent reactions that any contemporary comic filmmaker should envy. And one particular turn, that involves Ines and Toni and an ecstatic performance of a particular popular song is awe-inspiring for its entire delicious, delirious five or six or seven minutes. That’s the scene where the tender but never soft “Toni Erdmann” takes a flying leap from idiosyncratic to indelible, with at least half-an-hour of virtuoso eccentricity to go. 162m. (Ray Pride)