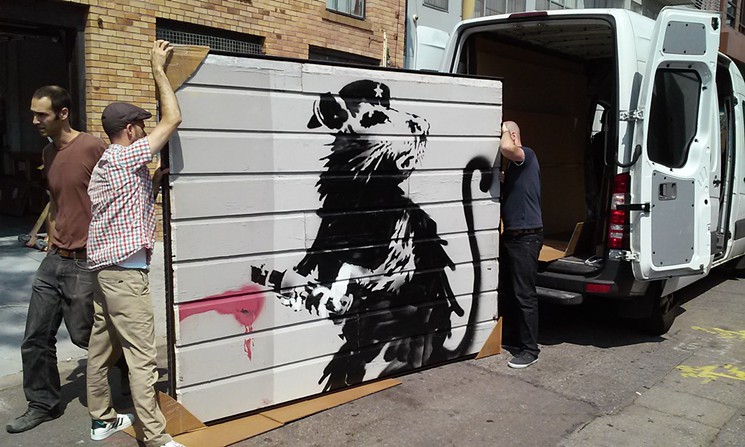 Superficially, Colin M. Day’s “Saving Banksy” is about a San Francisco resident who cuts a wall off a Victorian building in order to preserve a piece of street art by Banksy and to prevent its unsanctioned auction for bundles of cash. Where a Nobu is now being built in the Fulton Market area, a confirmed Banksy rested since 2010 at Randolph and Peoria on a brick wall, a rendition of a baby carriage tumbling down a shadow of now-demolished stairs, an homage to “The Untouchables.” The Haight Street Banksy is a rat. A trademark Banksy rat, highly attractive to street-art profiteers, also painted in 2010, when the British artist’s film, “Exit Through the Gift Shop,” played in both cities. The most telling comment comes when street artist Ben Eine tells Day, “It’s the poor street kids and the multibillionaires. We’re doing everything for nothing, and they’re walking home with Banksys for a million dollars.” The interviews with street artists about the ethics of making art and taking art become the true subject of “Saving Banksy,” and a small, spirited conversation with graffiti artists and other passionate voices. The museum curators on view, not so much. 80m. (Ray Pride)