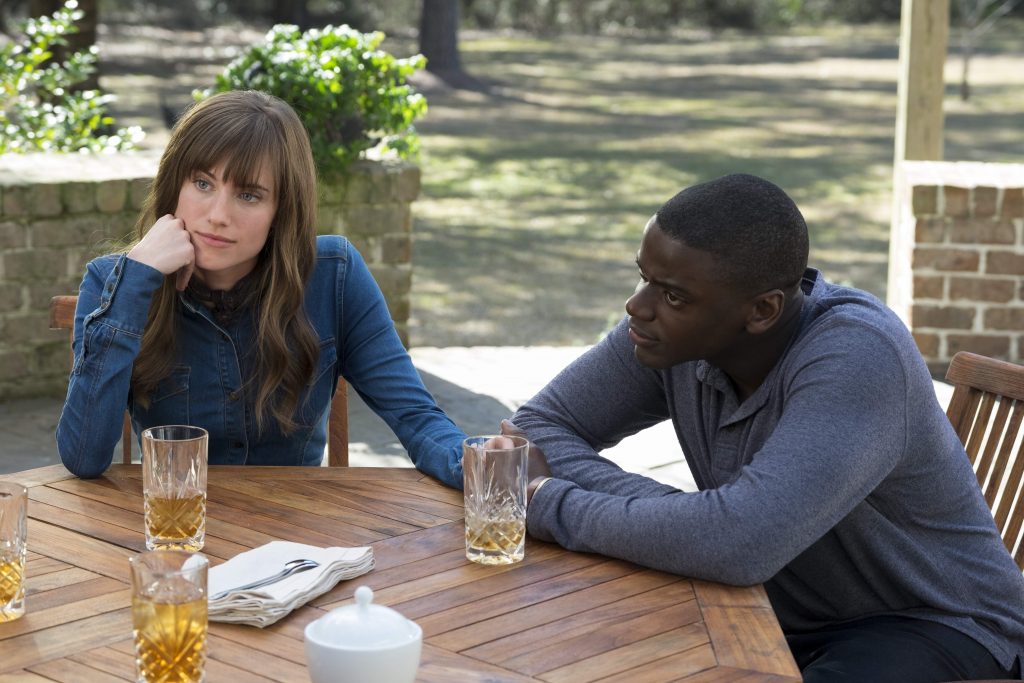 “Get Out”’s got it. Jordan Peele’s aggressive, tonally assured debut as a feature writer-director functions as a refined suspense thriller, consummate film critique, savage satire, inspired horror, paranoid parable and fierce, profane comedy. It’s archetypal, prodigious American moviemaking, smart and sly, less a hybrid of influences and forebears than a succession of shocking, often thrilling satisfactions. (Universal Pictures calls it a “speculative thriller.”) The five years of mastering storytelling forms in the “Key and Peele” series seems to have infused Peele’s bloodstream with everything he’s ever seen and everything he and Peele ever dissected then mocked. There are jumps and thumps, lacerating irony, and in the end, a succession of subtexts that rise to text, as political as fuck. (“Get Out” is also deeply satisfying in how thoroughly Peele skewers the teeming history of Sundance dysfunctional white family get-together melo-screamers.)

Rose Armitage (Allison Williams) invites her African-American boyfriend, Chris Washington (Daniel Kaluuya), to her family’s large white house on a wooded estate (shot in Alabama). Rose she tells Chris that not only is he her first black boyfriend, she hasn’t told her parents: her retired surgeon father’s not racist, “he would’ve voted for Obama a third time if he could have.” Each bit of the construction of “Get Out” gleams when you think about it afterwards, which is why I’m skimping on description. “Get Out”’s good to see going in blind.

Even to suggest likely influences would give away too much of the game: let’s leave it at “Guess Who’s Coming To Dinner” meets “Texas Chain Saw Massacre” (with a dollop of Peele’s admiration of “Rosemary’s Baby”). The consummate image of Williams, the prescriptive WASP goddess of Lena Dunham’s “Girls,” sitting on a bed, sipping milk from a pint glass through a straw, legs folded, wearing a well-cut white blouse, hair pulled back from her face in a severe ponytail, her cheekbones gleamingly moist, her ears prominent in elfish fashion and backlit to translucence, is but a single, artfully considered image. Could a vessel so white possibly be impure? Could avowed genteel white liberalism transform into an unspeakable (and unspoken) mutation of paternalism? And the closing scenes, which come as the culmination of a half dozen satisfying callbacks, resolutions and twists, offer little reassurance. The light at the end of the tunnel is only the promise of another set of flashing blue lights atop another police cruiser. As Chris’ profane best friend, Milton “Lil Rel” Howery, is always right and right on the money; Howery has an almost unspeakably obscene comic burst about a murderer that rollicks out of nowhere and goes everywhere. Is everybody in on this? You know the answer even before seeing “Get Out.” Conceived during the Obama presidency, Peele’s solid work lands squarely at the start of Trump’s. With Bradley Whitford, Catherine Keener, Caleb Landry Jones, Betty Gabriel, Marcus Henderson, Lakeith Stanfield, Stephen Root. 103m. (Ray Pride)

“Get Out” is now playing.