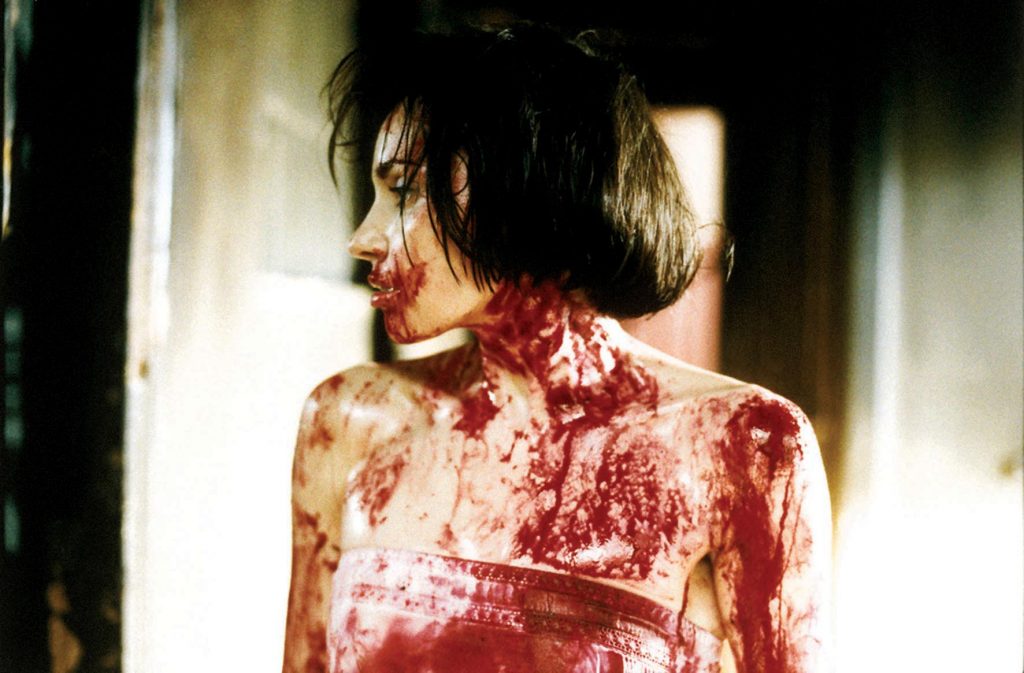 Chicago filmmakers tend to be more effusive conversationally about films and other filmmakers and cultural history than even movie reviewers or the most besotted latter-day filmgoers: it’s as if after hours and days and months with heads down on a project, catching the scent of someone else’s flower garden is blessed relief. Local stalwart Melika Bass, who teaches at the School of the Art Institute of Chicago, will be showing “Devotional Animals,” a survey of some of the most recent of her singular, simmering work at the Siskel Film Center “Conversations at the Edge” on April 6 and three of her short films are newly available on the Fandor streaming service.

But Bass is also in the midst of a compelling series of fourteen movies running through May 9 at Siskel, with each film playing twice, under the rubric “New Sensory Cinema.” Each film is essential viewing in its own right, dreamy and tactile, provocative and intoxicating, including Athina Rachel Tsangari’s “Attenberg” (2010), Eliza Hittman’s “It Felt Like Love” (2013), Roy Andersson’s “You The Living” (2007), Lucrecia Martel’s “La Ciénaga” (2001), and two personal fixations of mine, Alan Rudolph’s “Choose Me” (1984), an exquisitely calibrated yet goofball screenplay and touching meditation on mediated desire, and Claire Denis’ “Trouble Every Day” (2001), a vampire movie co-starring Vincent Gallo that is almost blasphemous in its bloody zeal and pictorial ferocity. Bass shared her own enthusiasms. “Well, these are films from the last thirty years,” she tells me, “that amplify sensation to create experiential narratives, instead of more standard, linear plot-based cinematic storytelling.”

“The body acts as a territory of desire, a vessel of transformation, a site of return, and a mode of resistance to cinematic capture,” Bass writes in her elevated introduction to the series. “Each movie offers a provocation of the senses—devotion, entrapment, obliteration, ecstasy, possession—in which the filmmaker pushes against the boundaries of genre to propose new cinematic forms.” Just scanning all the titles, I say to Bass, I’d throw in “dreamlike rapture,” where these movies become movie-movie while creating its own consciousness, drifting narratively while remaining obdurately specific, physically concrete. You can’t pin it down but there’s a real/dreamt world slip-sliding before you. Textures, dreaminess…and raptures, too. In a classical video store, I could see the label on the shelf: “THIS IS THE COOL SHIT.”

“Yes! Exactly!” she says. “Dreamlike rapture is key for these movies. The cinematic tools of texture being used in all of them—light, color, physical surface, sonic detail, motion—these all help the cinematic hypnosis to function. This is not new at all to cinema; the beginnings of early cinema were linked to magic, sensation and spectacle. These are fourteen innovative contemporary narrative filmmakers who are making up their own kind of storytelling and offering what I think are unique moviegoing experiences, using this sensory immersion, rather than traditional plots or dialogue-driven storytelling, to bring us into a character’s point of view, to give us the simulation of being in a kind of present, often, in a space, or inside an insular subculture, or they may trigger our memories through fragments. The first class on Jonathan Glazer’s ‘Under the Skin’ touched on this in surprising ways. We talked about how that film so intricately, and disturbingly, schools us in empathy, literally toward ‘the alien.’ Like a lot of the movies in the series, that one uses many deeply pleasurable trappings of genre, in that case horror and documentary, so skillfully as a device to get us to swim in ambiguity, and create a real moral complexity.”

Each “New Sensory Cinema” has a weekly presentation by Bass as well. “The Tuesday evening public screening series is a long-running, wonderful collaboration between the Film Center and SAIC and other academic institutions and invited professors,” she explains. “Several of SAIC’s departments—notably the Art History, Theory & Criticism Department and my department, the Film, Video, New Media, and Animation Department—teach a brand-new class in this same time slot each year. Like mine, these classes have in the audience about forty enrolled SAIC students, and because it doubles as a public series at the Siskel, includes folks who buy a regular admission ticket because they want to see the film in the wonderful cinematic environs of the Siskel, take in a short lecture and perhaps engage in a brief discussion afterwards. It’s a fun, mixed crowd. Professors pick the films, design the frame of the course, run each Tuesday night class and lead discussion. For my class, I worked with [the Film Center’s] Marty Rubin to find and book the films. I’ve been coming to these Tuesday night classes periodically as a cinephile for years, so teaching the course is really fun.”

So it brings together your sensibility as a filmmaker as well as a devoted film watcher? “I teach another class called ‘Experimental Narrative’ at the Art Institute, and I make, well, what you might call ‘experimental narrative’ films and installations. I am passionately behind innovation in narrative cinematic storytelling, it’s what a lot of my students are making, and my own films are for sure snow-globe worlds that often register as dreamy, mysterious and sensory.”

Is it wrong to categorize that as a “female/feminine” instinct from the films here? Hittman, Tsangari, Martel, Denis, Hadzihalilovic, they’re all just great filmmakers who have been allowed their voice/have asserted their directorial voice. “All those folks are indeed exciting, visionary filmmakers, and their movies are ideal for the class, and I know they’ll provoke discussion.” But male filmmakers are in this mix. “We won’t be trying to define a feminine aesthetic in the course, but I am interested in ideas of ‘The Female Gaze,’ brought up by Jill Soloway in her Toronto International Film Festival lecture this past year. The talk is a great teaching tool, as well as an important manifesto. In the class, we’ll look at the power of the stories themselves, the method, and consider who is creating these worlds and experiences, and what the perspectives appear to be, how and what are they rehashing or enveloping us, to consider.”