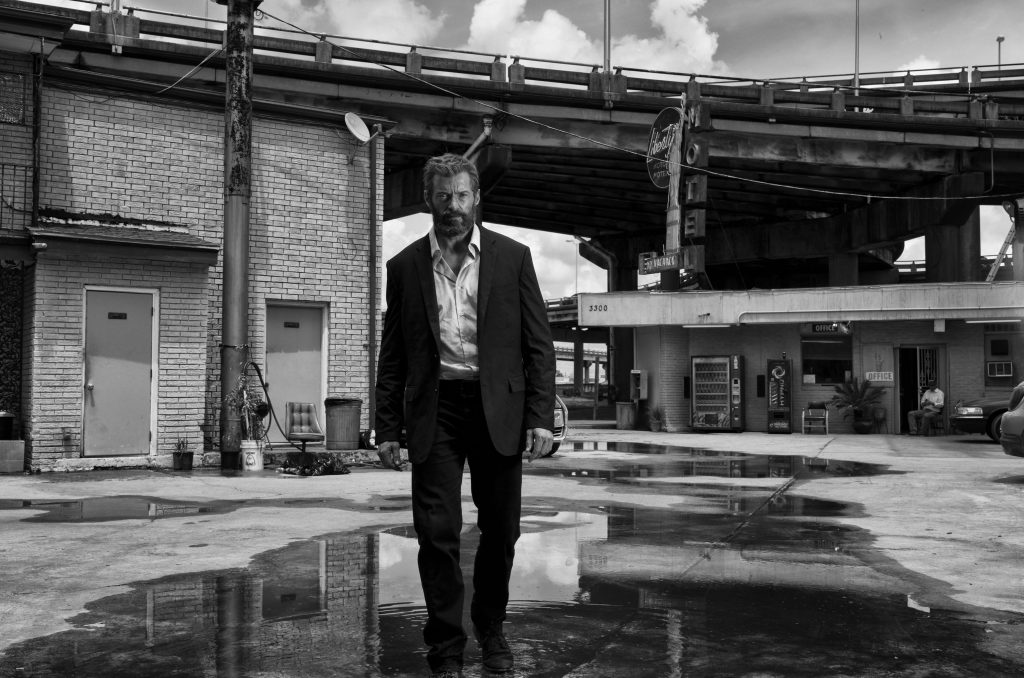 Most Marvel movies seem less part of an “extended universe” than an epic slog of computer-generated monotony. “Logan,” though: oh, “Logan,” you heartbreaker. Co-writer-director James Mangold’s sere, melancholy movie is in its own emotional universe. (One co-writer is Scott Frank, who co-wrote “The Wolverine” as well as “Out of Sight” and “Minority Report.”) Seventeen years after the first appearance of Hugh Jackman’s Wolverine character in “X-Men,” and a couple of movies of his own (including one directed by Mangold), he’s tired of the shit. “Aw, fuck,” are the first words we hear in a canvas draped with strong violence and pithily disappointed language. (Peckinpah would surely sneer down approvingly upon the proceedings.)

There’s no Wolverine-costumed bravado here, Jackman as weather-beaten as the handsomely sturdy yet battered black boots he wears. There’s a little of Clint Eastwood’s “Unforgiven” (1992), too, as stakes escalate. Partially set in the Mexican desert, “Logan” draws on the iconography of the Western, down to invoking George Stevens’ “Shane” (1953) on a hotel TV screen. “Logan” invests in the ambition to be “Children of X-Men,” unfolding in a placid 2029 dystopia.

The introduction of a feral child (Dafne Keen), who may be a man-made mutant in a time when mutants no longer appear, suggests Alfonso Cuarón’s 2006 masterpiece, as well as  “Terminator 2.” But all to the good. Mangold’s characters seethe with fury, pulsate from the wages of violence, the ache, the hurt, moment-to-moment of nothing less than deadening grief. But will a child lead them? And how can that child, the hope of a future, be kept from certain death at the hands of the corporation that may have created it?

There’s also a falling father figure to tend to: Patrick Stewart’s now-nonagenarian Charles Xavier, the greatest mind on earth giving in to dementia. Although he does have a copy of James Joyce’s “Ulysses” alongside his sickbed, nestled inside a toppled water tower, its rusticated interior dotted by an ironic image of a star field through the spots where weather’s wiles have punched through rotting metal.

Small jokes tickle, some echo, including Logan donning a pair of readers that still have the price tag on. But “Logan”’s superb depiction of sorrow, of deadening dejection, of the awareness of mortality on multiple planes, rises far above Mangold’s ready embrace of influence. (Mangold calls it “the prism of genre.”) The bittersweet, sometimes just bitter tone is of a piece, nicely indicated by composer Marco Beltrami: “[Mangold wanted] directness and rough edges, an unpolished tone, energy. Somehow, I had to capture this while simultaneously creating a modern score. It did not need grandiose thematic music and verbose melodic statements. It was all about vibe.”

The final shot is both magisterial and cheeky, invoking the faith of a huge chunk of the western world and positioning it parallel with the X-Men. A simple gesture in an elemental widescreen frame, it’s breathtaking. Cathartic, too. It’s emblematic of “Logan”’s august vibe, followed by a surprising end credits song of grave grace. With Richard E. Grant, Stephen Merchant, Elizabeth Rodriguez, Boyd Holbrook. 137m. (Ray Pride)