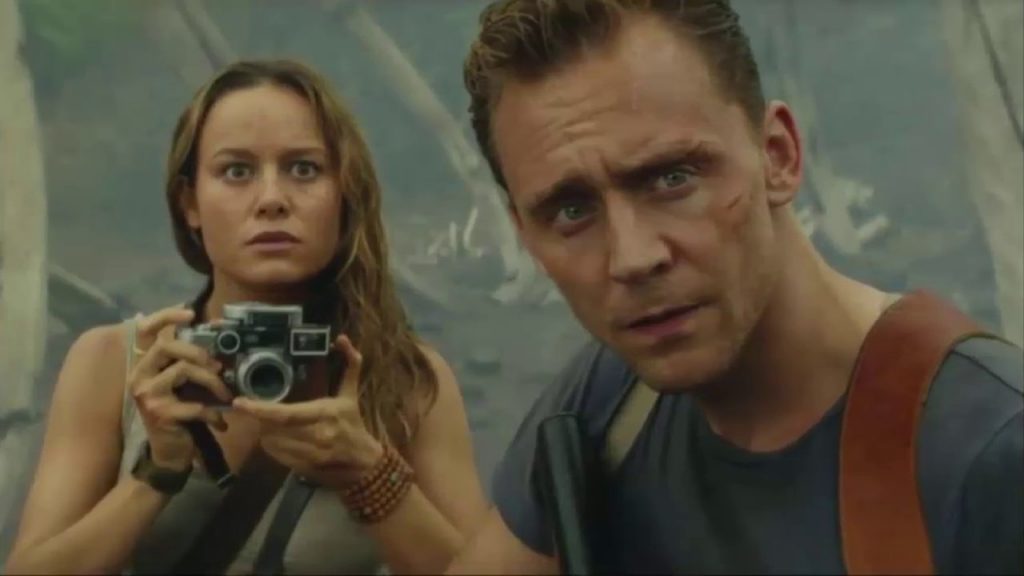 “Kong: Skull Island” is a hyper-scaled B movie set in 1973, in the waning days of U.S. days in the Vietnam War, that appropriates the DNA of dozens of other movies for a crisp burst of grandiose goofiness. Logline: soldiers and scientists descend on a primeval island and discover large creatures and even larger, splendid creatures, not limited to the King of the title. (Computer-generated imagery of fire and water has finally grown shiveringly convincing.) “Movies have become so homogeneous—I think the only currency in film right now is voice,” director Jordan Vogt-Roberts told the Los Angeles Times. “That is one of the only things right now that gives people a reason to say, ‘Yes, I should see this in a theater and not watch it on my iPhone or just stay home and drink a bottle of wine and watch Netflix.’”

The second feature credited to the thirty-two-year-old Vogt-Roberts (“Kings of Summer,” 2013), its most blatant influences are Ray Harryhausen’s creature animation and “Apocalypse Now,” which along with themes, scenes and imagery, borrows names of not one, but two characters from Joseph Conrad’s source material, “The Heart of Darkness” (Marlow, meet Conrad).

Other influences Vogt-Roberts has bestowed upon interviewers: the efficiency of “Die Hard” and “Sorcerer,” Pokemon, “Predator,” Miyazaki’s “Princess Mononoke” and the Coen brothers. Let us briefly defer to a tweet from the filmmaker Aaron Stewart-Ahn, who reveled in his first viewing: “As a kaiju-ologist who also loves movies with a crazy tone I fucking loved ‘Kong: Skull Island.’ It’s what ‘Jurassic World’ wished it could be.” (“Kaiju” is usually translated as “strange beasts”: great mega-monsters that stomp and romp.) And while we’re at it, here’s game creator Hideo Kojima: “I knew Vogt Roberts was a genius in his indies days but ppl will see it in @kongskullisland. Enjoy Kaiju film of Kong’s island, not as reboot.”

And as cinematographer Larry Fong (“Super 8,” “Batman v Superman: Dawn of Justice”) told Hugh Hart at The Credits, “We were both interested in capturing this kind of classic 1970s look, rather than just taking all our references from other monster movies. If you can imagine a mash-up between ‘Apocalypse Now,’ ‘Thin Red Line’ and Bong Joon-ho’s monster movie ‘The Host,’ then you get an idea of how we wanted to use those films as springboards for our imagery.” So does all this compacted film nerdery make “Kong: Skull Island” a derivative mass? Far from it: its admixture of bits and pieces, from melodramatic to satiric, from posturing to poetic monstrosities, makes for a generously giddy, swarming canvas. Its pleasures range from John Goodman braying swathes of dialogue of near-Coen-level preposterousness to a stand-off between Goodman and a highly excited Samuel L. Jackson to Brie Larson standing ground as a combat photographer dispatched along with all the kings and princelings of the ill-advised search for unknown life inside the hollow Skull Island.

Plus, John C. Reilly, not only from a different movie, but from a different universe, as a pilot lost on the island since World War II who just wants to get back to Chicago. The eager, teeming screenplay is credited to Dan Gilroy (“Nightcrawler,” “The Bourne Legacy”), Max Borenstein (“Godzilla”) and Derek Connolly (“Jurassic World”), with story by John Gatins (“Flight”). With Tom Hiddleston, Toby Kebbell, John Ortiz, Shea Whigham. 120m. Widescreen. (Ray Pride)