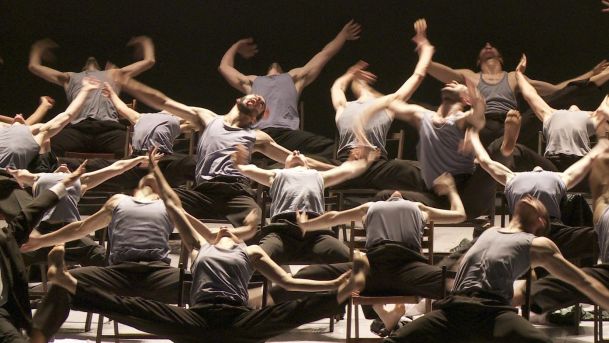 Here’s a rhapsody or a few: the dance delectations of “Mr. Gaga: A True Story Of Love And Dance,” Tomer Heymann’s observation of the work of a long-reluctant documentary subject, choreographer Ohad Naharin. Naharin began a prestigious career relatively late, a kid off the kibbutz, performing at 22 with the Martha Graham Dance Company, as well as attending both Julliard and the School of the American ballet. Years of developing his choreographic language as artistic director of the Batsheva Dance Company in Tel Aviv followed. Heymann draws on archival and performance footage, as well as eight years of observation of process and motion. The work startles in any form, germinal or staking the stage, a vivid physicality that appears torn from choreographer and performers alike. Of his “Gaga” discipline, Naharin relates, “I’m bringing it back to the animal we are, and to the hunters we are.” He narrates the film in a confident basso voice that suits his dance and his peremptory style. There are hiccups: some fiction first presented as truth, but the human canvas teems and thrives throughout. As Naharin told Haaretz, “I am a control freak. The issue of documenting or not documenting stems from the fact that I’m such a control freak. By giving in to myself or to someone else and offer permission, I’m repairing something in myself.” In “Mr. Gaga,” bodies are bent, not broken. The results are resilient, ravishing, resounding. 100m. (Ray Pride)