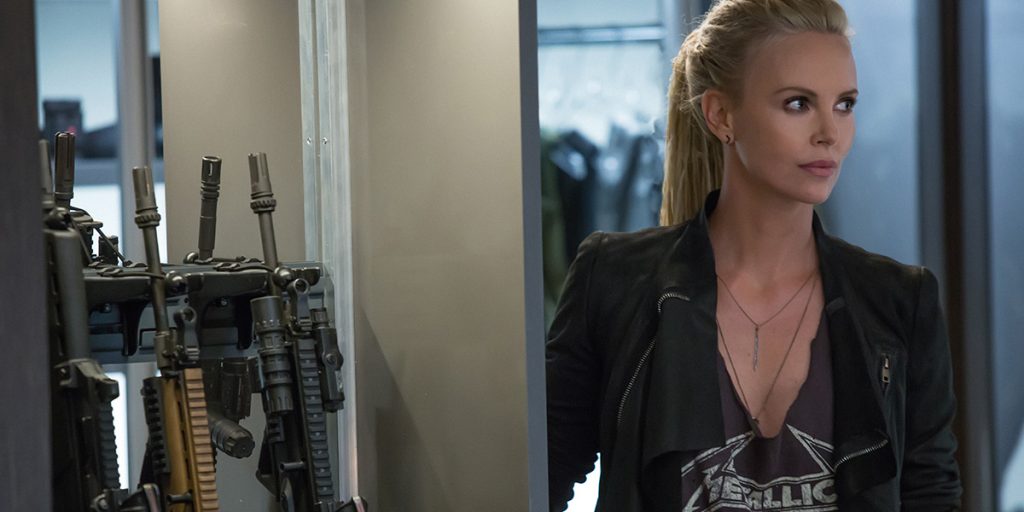 “Dominic Toretto just went rogue.” In interviews promoting the eighth installment of the $1.3 billion “Fast And Furious” franchise, Vin Diesel and other players have all but suggested the next one of the many already contracted could well be shot into the sun or blasted to infinity and beyond: nothing can stop the chaos with interludes of low humor and sentimentality. Gravity, logic, physics, the deaths of major characters, their ready resurrection, nothing can stop the middling geniality of the “family” of characters led by Dom Toretto in “Mission: Implausible”-style adventures around the planet. “Fate of the Furious,” giving not too much away, winds up with a car and tank chase over Arctic ice while a Russian submarine commandeered first by rebels and then by a hacker who calls herself “Cipher” (Charlize Theron, who does not blink) races only yards beneath. A cascade of dozens of autonomous cars hacked to life and onto the streets below approaches sculptural performance art, and a couple of shots in an Atlanta-passing-for-Midtown car chase with other self-driving cars suggest the sleek choreography of Jacques Tati gags, even if achieved at exponential cost.

The abiding strength of the series, of course, is that it’s also the Fast and the Diverse: aside from a perky burst of hot-pants ass-ogling in Havana in the opening street race, even in its lame comedy byplay, close-ups are lavished on the faces of the roster of diverse performers (Diesel, Ludacris, Tyrese Gibson, Dwayne Johnson, Scott Eastwood, Jason Statham). Kurt Russell makes a few brief pops as a government agent calling himself “Mr. Nobody,” and whose chins get no special treatment. But attention must be paid to Michelle Rodriguez’s bright smile and livid eyes, even if the screenwriters shunt her to the side in most scenes. Rodriguez oughta be the boss.

For a film directed by F. Gary Gray, a former music-video director, there are few memorable uses of music, unless you count the bleats of Alvin and the Chipmunks during Statham’s cheeky shootout-with-baby-in-infant-carrier that recalls both John Woo’s “Hard-Boiled” and Samuel Fuller’s “Dead Pigeon on Beethoven Street.” Despite its geographical breadth from Cuba to New York City to Russia, “Fate of the Furious” comes closest to sociopolitical commentary in the dressing of Theron’s Cipher: unlikely blonde dreads and an ensemble of t-shirts (including Metallica) and dark jackets suggest the notorious dishabille of WikiLeaks’ Julian Assange, spruced and gender-bent. With Dame Helen Mirren. 136m. Widescreen. (Ray Pride)

“The Fate of The Furious” is now playing.