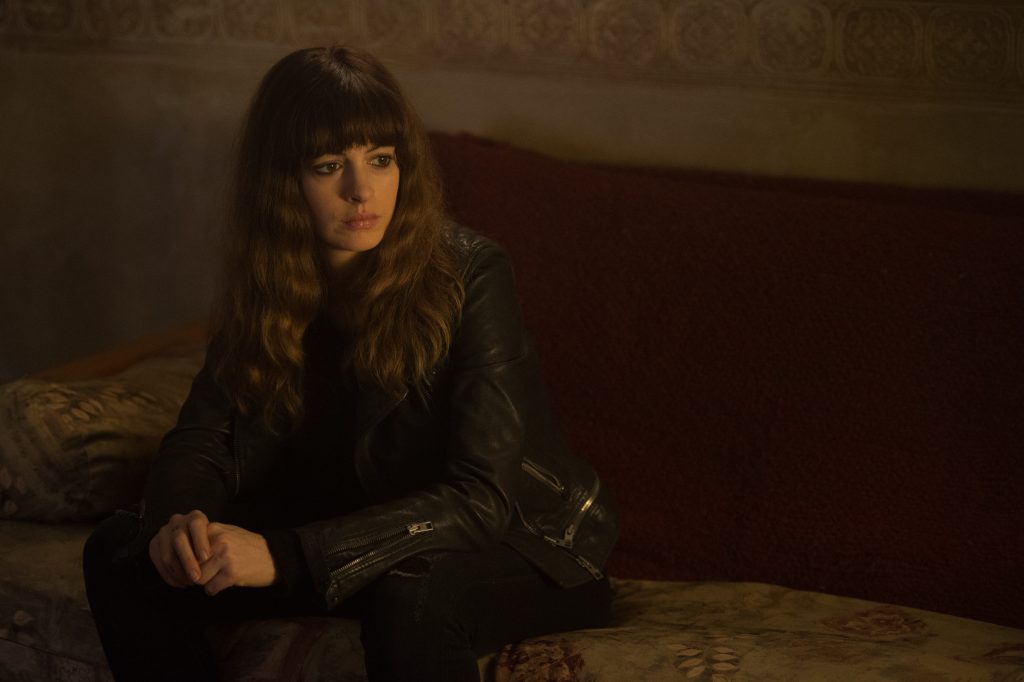 Spanish writer-director Nacho Vigalondo’s fourth feature, the comedy-drama-fantasy-monster movie “Colossal,” in his own words, is “a movie in which a universally recognizable story is told through a collision of genres that is, a priori, impossible. On one hand, it reflects the comical romanticism presented by American independent film over the last three decades. On the other hand, it refers to kaiju monster movies from Japan, which have become icons of fantastic and catastrophic cinema—definitively bigger than life.”

Through this collision of cultural clutter, Vigalondo addresses addiction, alcoholism, toxic masculinity and a woman claiming her destiny. The New York boyfriend of Gloria (Anne Hathaway), a journalist who’s given up pitching stories for pitchers of booze, tosses her out, and she heads upstate to the empty house she had grown up in. Once there, she runs into her past, largely in the form of Oscar (Jason Sudeikis), who she had known as a child, and who now runs a local bar and soon offers her a job. Then the monster attacks: far, far away in Seoul, South Korea. But how close is the monster, really?

It all sounds so dead serious and yet “Colossal” is bristling, deliriously serious, explosively funny, and rich with wicked suggestiveness at every burn. From what I had heard after its debut at SXSW 2017, I had no clear idea how the story functioned. Anne Hathaway calls it the sci-fi cousin to Jonathan Demme’s “Rachel Getting Married,” but it’s even more than that. How does a thirtysomething woman, failed at romance, unable to handle alcohol, react when she discovers her behavior could be triggering a monster that’s appeared on the waterfront of Seoul, South Korea? In a couple of words, it works, and wow.

I spoke to the emphatic and emphatically accented forty-year-old Spanish writer-director over the phone at the end of his press tour a few days before “Colossal” opened nationwide. We talk about several reveals in the film, including the ending, but only suggestively.

How did you find the form of the film? Was it all on the page, did it come together with Hathaway and Jason Sudeikis’ performances, taking darkness where it comes, or are you someone who refines and refines in the editing room?
I wish I could tell you a kind of Werner Herzog story about how I was able to hide elements, to fight against people at the studio, to make a film that is so different from anything else. I wish I could tell you a story like that, a story that features me as a hero, some kind of filmmaking hero. But the real thing is that I wrote the script, I was ready to shoot this movie as something more discreet, closer to home. But Anne Hathaway just came out of the blue and offered herself for the role. Then happily everything felt different. It became the easier film for me to finance and produce. Just because it wasn’t just a movie coming from me, it was the next Anne Hathaway film. So if you appreciate the film, you have to thank Anne Hathaway.


Where is the heavy lifting for you in combining all the strands? We have kaiju, we have alcoholism, we’ve got our toxic masculinity. Does it get much tighter, finer, in the edit? It’s an impressively swift script, scenes take their time to find a point, but they don’t dawdle at all.
All of the things you mention. I was really aware of those issues in the script. Once you are making a movie in which this drunk woman is fighting this drunk guy and once you know the reason behind the fight, you are aware of what we are talking about. There is no way you can avoid that. The most frightening things about the film in writing the script was the fact that I was trying to deal with some serious issues while making jokes. And while using giant creatures. That was the scariest thing in making the film. I was putting together some stuff that probably shouldn’t be together.

And the monsters inside are much scarier than the rock-em sock-em.
Yes, the movie was this kind of metaphor for self-destruction. These giant monsters are projections of your alcoholism. But that movie should be only half-an-hour I needed the story to be bigger in other ways. I needed the characters to go bigger in many ways. Even if we have big giant monsters in the city, we needed the audience thinking that the characters are equally big, the images are going to come from themselves, they’re going to face their shit.

The closing scene and especially the last shot are sublime. When Anne’s face indicates, oh I can’t have a drink. I’ve got this story, you want a drink, I can’t have a drink. Her expressions: she’s confused again, she’s sober and she’s smarter, it’s sweet and hilarious.
Yeah, yeah. But the thing with alcoholism is that even if you win this battle, the war is never going to end. You’re gonna face it for the rest of your life. When you’re battling an addiction, even if you are sober now, the things are going to be there tomorrow. She’s gonna fight for the rest of her life. I don’t like movies when people get better like through this magical power. Things are never going to be thoroughly better.

All that is in that moment, like a wall of bricks falling, and yet it’s simultaneously so fucking funny.
The ending is one of the few things… can I tell you something? When we first met, she told me that the moment she decided to make this movie was reading the last paragraph. Like, okay, instead of just saying no to the drink, she faces the fact that the struggle is going to be there all the time. She played the moment in front of me. We were in this rehearsal space. She played Gloria all the way through. And I’m like, okay, okay, now I’m in heaven. This is going so well. I was laughing so hard. That thing at the end is what put us together on the same page for real.

Her features are large and she can play large, but she’s always human, she’s not cartoonish. It’s full-on pathos underneath, but it’s straight-up funny, too. She gives Gloria lightness even when she could be crushed.
She’s a comedian! She has the comedic—she has comedy at her center. When you see her and Jason Sudeikis just making jokes, they’re two comedians having fun.

Settings and their specific details are so important in your movies. In “Colossal,” Oscar’s bar that’s two bars. The chichi-ish New York apartment of Gloria’s worn-down boyfriend. The empty house that had belonged to her parents. Jason’s hoarder house. Even the cluttered studio of the one-night stand guy.
I can tell you something about that! I love locations. I love scouting locations and I love those that can have relevance to the character. The way I approach that is never asking the crew to create a set for me. I want to work with the locations, and once we find the location, I love to spend a whole day there, just making my shot list and encountering the space and finding the stuff that otherwise wouldn’t be there. If I had people to build a bar for me, that bar it’s just the script. That bar is a far more interesting place if it comes from real life. I can go back to the script and change some things so the script is rooted to that reality. Things are much more interesting. For example, and this is the biggest example of this you can imagine, the bar has the different sides.

The modern side and the “Western” side that is hidden behind a barrier.
The sports bar and the country side. That man-cave. Okay, believe me, the bar was like that! I didn’t ask the art department to build this kind of fragmented space. I found the place and then I went back to the script and I added all those elements to the story. Okay, the bar represents Oscar, and Oscar is a fragmented character. Okay, that makes it a better bar. But that bar wasn’t imagined, it was something that was already there.

Orson Welles told a story like that to Peter Bogdanovich, who says, “oh what you’re telling me, Orson, is that a director takes advantage of accidents?” And Welles says, “no, my dear boy, a director presides over accidents.”
Absolutely! There’s nothing more rewarding than accepting reality for yourself. Letting your space and your time coincide, blocking yourself into your own kingdom.