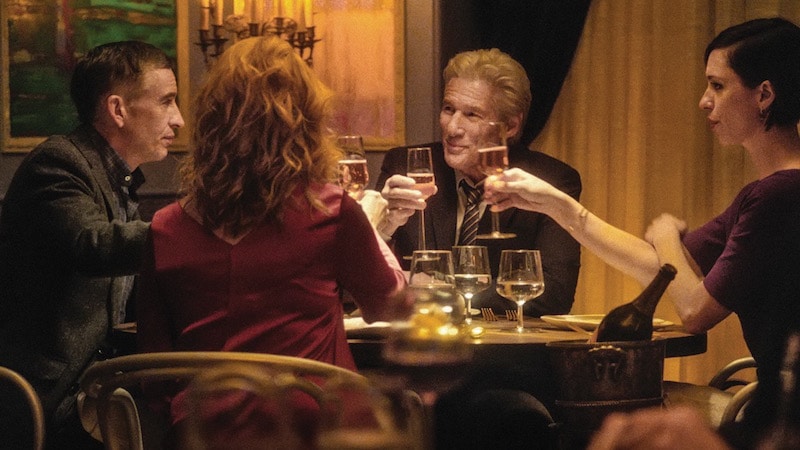 Oren Moverman’s fourth feature as writer-director, “The Dinner,” the second starring his silvered muse, Richard Gere (also the lead in the Moverman-produced “Norman”), is a slip-sliding mirror image of upper-upper-class lives, a psychological thriller with carefully paced layers of revelation. Gere plays a congressman running for governor who has dinner with his wife (Rebecca Hall), his estranged younger brother, a history teacher still shaky from a nervous breakdown (Steve Coogan) and his brother’s wife (Laura Linney) in a sharp New York restaurant to discuss many things, but eventually, a crime their sixteen-year-old sons have committed together, recorded and posted on the internet, but have not been discovered to have perpetrated. Based on an international bestseller by Herman Koch, “The Dinner” refracts levels of moral responsibility and self-comprehension and self-absolution through a twist-driven story accompanied by a clockwork procession of overwrought dishes. “What would you do if your children have committed a horrible crime?” is Moverman’s summary of the story. “How far would you go to protect them?” The grace of “The Dinner” comes from its performances, particularly Gere’s genial sleekness placed against Coogan’s consternation and growing agitation. Coogan trembles with his character’s resentment, a barely stemmed incendiary force. These are terrible people; Moverman hopes to demonstrate why. Coogan and Gere deliver. With Chloë Sevigny. 120m. (Ray Pride)

“The Dinner” opens Friday, May 5 at Landmark Century.