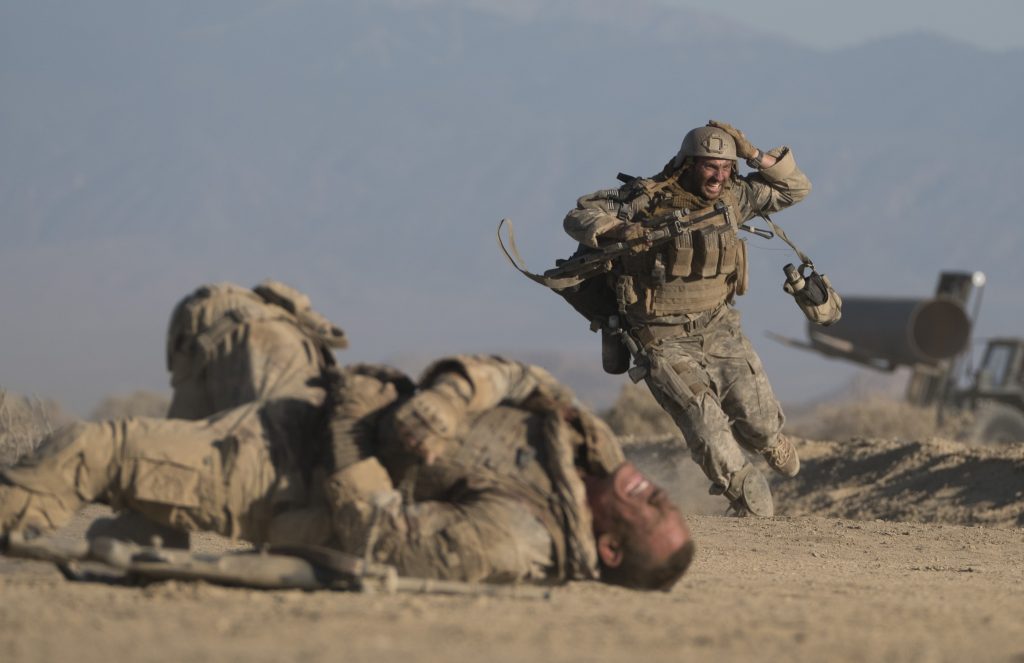 Doug Liman’s often-eccentric movies—“Go,” “The Bourne Identity,” “Edge of Tomorrow”—are matched by stories of his personal eccentricities, including a reputed test for potential assistants that would qualify them for deep undercover work. “The Wall” suits Liman’s persona in its avoidance-attraction to geopolitical forces, as well as a fourteen-day shoot in the middle of July in the Mojave Desert. “The Wall” is a furious little revision of first-time screenwriter Dwain Worrell’s 2014 Black List-ranked script (where the characters were woefully named Locke and Hobbs). In Iraq 2007, as “the Iraq War is winding down” and President Bush has declared victory, two American soldiers, Isaac (Aaron Taylor-Johnson) and Matthews (John Cena) are pinned down by a sniper near a crumbling wall, fifteen or twenty feet across, hardly more than five feet tall at best. It’s a concise nightmare, dolloped with profanity, a skeletal narrative that finds its footing with radio exchanges with the sniper that proceed with philosophical asides and pointed taunting. As for the story’s attraction, Liman has said, “I was really drawn to the fact that you could do a movie set in Iraq that wasn’t about the morality at all. It wasn’t, ‘Should we be there, should we not be there.’ These soldiers don’t have the luxury. They are there. And somebody’s trying to kill them and they have to survive. I loved the idea of checking my politics at the door.” Beyond the narrative’s inexorably destructive unfolding, the brilliant, thrilling ending of “The Wall” has brute conviction and chilly logic that befits a reported $3 million budget. The ending was shot six months after the film was finished; in recent interviews, Liman says that Amazon Studios’ Ted Hope and Bob Berney immediately agreed to it on first hearing. It makes the movie. 88m. (Ray Pride)