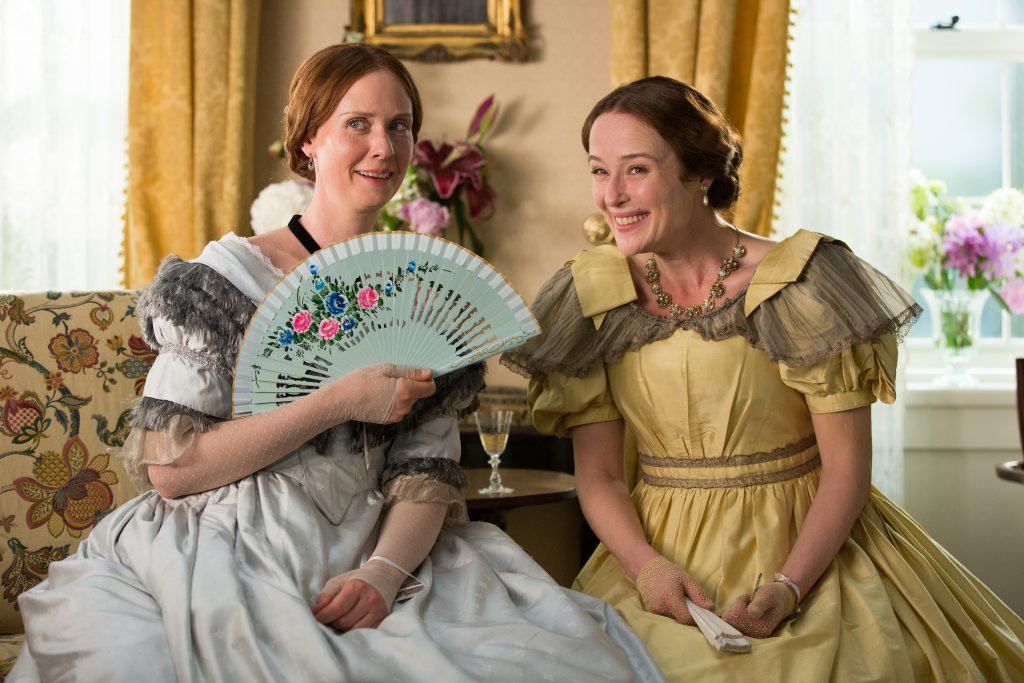 The great English filmmaker Terence Davies’ ninth feature, “A Quiet Passion” is an exquisitely measured portrait of the waning days of the prolific poet Emily Dickinson, unrecognized in her time, bearing afflictions, immersing herself in family. Davies knew the poems since childhood—“Because I could not stop for Death /He kindly stopped for me” is a passage Davies readily cites—and immersed himself in six biographies before writing and directing a muted yet wry portrait of a very shy person making the most of her nineteenth-century life. Cynthia Nixon’s complex performance is equaled by the rest of the cast, including Jennifer Ehle as Emily’s sister and Keith Carradine as her father.

Meeting up recently with the seventy-one-year-old Davies, a natural raconteur with a mild stammer and theatrical lilt, at the Poetry Foundation, we spoke of his devotion to capturing light—as well as memory and song and suffering—and unexpectedly, we launched straightaway into a substantial subject.

In those years without work, did you feel like it was over?
Yes, absolutely. I thought, well, someone said, well, you know, no one’s interested in your films anymore. And that was my agent! That really was the nadir. I thought, well, if it’s over, “House of Mirth” [2000] is not too bad a film to finish on. Didn’t know how I was going to make a living! At all! Luckily, I was asked to do “Time and the City” [his 2008 essay film on growing up in Liverpool]. But because of that time lapse, the only way I could live was drawing the equity from my house. So I, I’m in huge amounts of debt. And that does make me feel…awkward. I’ve never, I’ve always wanted not to die in debt. My mother was like that and I got it from her. If I do die in debt, I will just feel as though I have failed. I hate being in debt!

But you have that roof over your head.
Oh, of course, yes, yes. I just don’t own it! [a cheery laugh]

After the silence, you’re now allowed to be keenly prolific, you’re permitted finance. It wasn’t writer’s block; it was funder’s block.
Yes, but it was difficult to keep hope alive, I must say. It was a very unpleasant… Um…What’s cruel, and it always seems to happen when you’re at your lowest, people going for you. Being nasty. Especially those people who I thought were friends being really nasty. And you just think, well, I thought friendship was supposed to support when you’re down and be happy for you when you were doing well. And clearly not. That hurt very much.

You’ve managed to make two films without compromising your voice in the past three years, though. And you have something—
I’m writing, at the moment, a film about Siegfried Sassoon, one of the three Great War poets of the First World War, and we want to get it finished for the end of the one hundred years next year. So I’m writing that. So he’s completely the opposite of Emily! He went everywhere, he knew everybody, he was hardly ever at home. It’s a complete contrast!

Beyond the intuition and the practice of making films, what would you say you have learned about duration and tempo? Moments in your work are often wed to music, inextricably, but you make lovely gestures out of how long a shot will hold or a dolly will travel. Are you working wholly from taste and instinct when you make these shots that are on one hand, concrete in their particulars, but abstract, and so often, so wrenchingly emotional?
Shots have a life and then die. I wasn’t rigorous enough to know when certain shots in “The Neon Bible” [1996] simply should have died in mid-cut or been cut out altogether. I won’t make that mistake again. But for those people who don’t like my work, they’re still too slow, they’re still too boring. They’re still far too reverential and solemn! You can’t please everybody, but that’s how I see it. I don’t think I have made that mistake again. Some things, whole sequences were cut out of this film. They don’t work, get rid of them. You’ve got to, you’ve got to be rigorous. If you don’t, then it becomes very self-indulgent. My style, a lot of people absolutely loathe it. 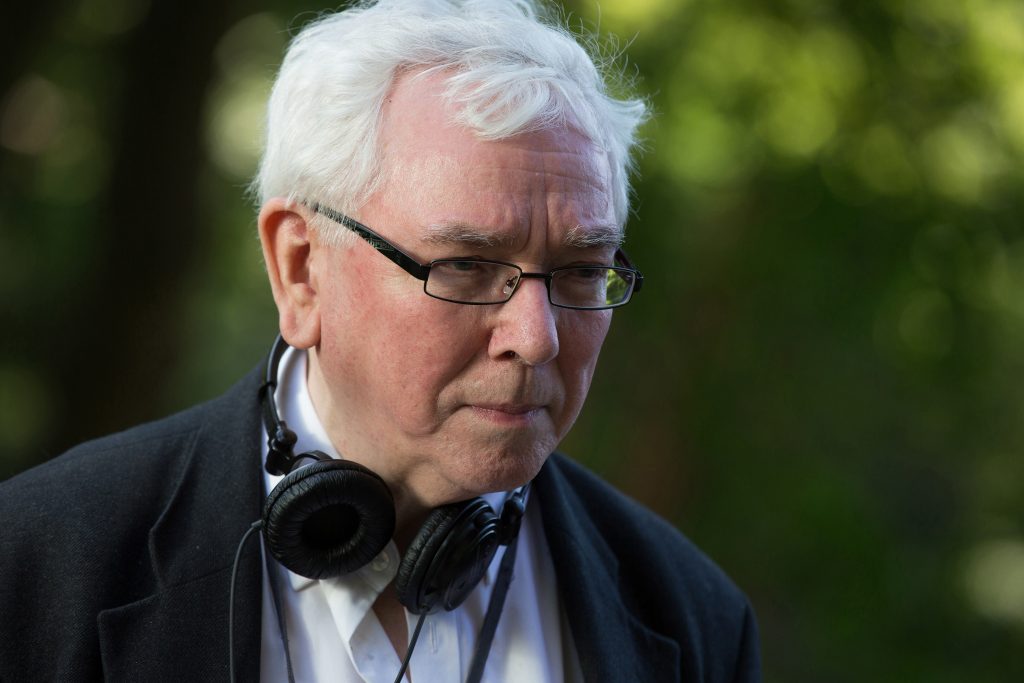 Light falling. This is how time passes, how sorrow seeps into your interiors and landscapes and across horizons. As in the scene at the doctor’s office, when the light perceptibly starts to become darker on Emily’s face. To take it pretty far, it’s analogous to the cone of light from the overhead projector beam that we see in several of your movies, that makes images come alive on a screen in front of us, in other forms, is always finding its way into your movies. Why is this attractive? Why do you clutch at the dying of the light?
I, I, I honestly don’t know. There are certain things which are very autobiographical. I think Mrs. Dickinson was probably suffering from post-natal depression. In all the biographies, she comes very near to tears all the time. I thought, I want to illustrate that. There’s a moment at the end of some days, when the light is very low and it comes in at a certain angle that just leaves me absolutely desolate. I can’t explain it. I feel desolate, the way the light falls. I thought, I want to give her that. That time of day, when the shadows lengthen, that’s exactly how I feel. I wanted to use that. I’m fascinated by light falling on a subject. That’s Vermeer, you know.

Vermeer, indeed.
There’s also a Danish painter called Vilhelm Hammershøi and he’s like a Scandinavian Vermeer! But with smudged light and doors that open to nowhere. Windows that open to nowhere. And if there’s a subject, it’s a woman, usually with her back to the viewer. We made the interiors of “Sunset Song” look like that. He’s a real discovery for me. I find light…thrilling. I live in a little village. We’re very near an estuary, so very often, there are evenings when it just flushes pink and blue…and it’s ravishing to look at! And where I live, in East Anglia, it’s got very Dutch light, so it’s very beautiful. But I wanted the light in this film to be like Shaker light. They’ve got huge windows in that house. And it should be crisp, and wonderfully warm as well. But I said to [cinematographer] Florian [Hoffmeister], gradually, throughout the film, the light goes out, it gets gradually darker and darker and darker. The only time, and I’m never lucky with weather, when she died, she died at the height of summer, and I [pictured] this black procession in long shot, blazing sun. And we got lousy weather. Also we did it in a real cemetery, and to have got that shot, we would have had to stand on graves, well, you can’t do that. You simply can’t do it. So I looked at that shot and went, “Oh! I wish the sun would come out. I do wish the sun would come out.” But I can’t control the sun.

“A Quiet Passion” opens Friday, May 19 at the Music Box.