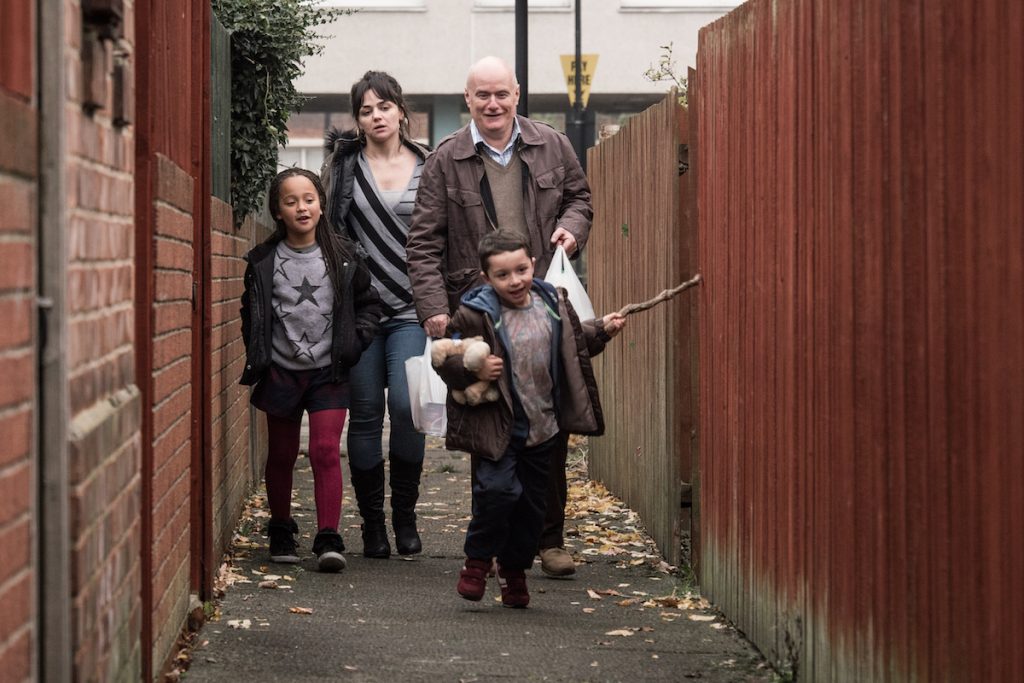 After completing a documentary a few years back, Ken Loach claimed that was it, he was done, after almost twenty-five fiction features he’d had his say. But admirers of his lovingly photographed, progressively inclined, actor-embracing raft of features can be grateful that he changed his mind for at least one more go-round. (“That was a rash thing to have said,” Loach joked recently. “There are so many stories to tell. So many characters to present.”)

At the age of eighty, Loach has made one of his most refined of his later features, “I, Daniel Blake,” about a sardonic Newcastle widower who finds himself up against an indifferent state when suddenly in need, swept up by what Loach describes as “the use of bureaucracy, the intentional inefficiency of bureaucracy, as a political weapon: ‘This is what happens if you don’t work; if you don’t find work you will suffer.’ The anger at that was the motive behind the film.” That ire, that fire, makes what could be rough going into an unsentimental, angering, but greatly moving melodrama about essentials like how to be a good person in modern times.

Dan, played with keen wit and with fierce presence by stand-up comic Dave Johns, is a carpenter in his late fifties who has a heart attack on the job, but it’s the damage done to his dignity by form-filling employment bureaucrats that nearly does him in. We’re in the thick straightaway: on black under the main titles, we hear the prim, domineering voice of a worker for an American company paid to press on dozens of small questions about his fitness to work, but never see her, arriving finally at Dan’s face, a ripe concoction of incredulity and offense. Dan meets a single mother, Katie (Hayley Squires) with two young children, and they pool resources against a society more prepared to shame than to lift. The tenor of “I, Daniel Blake” isn’t quite Dickensian, but it’s certain Loachian in its concerns and its bracingly blunt dramatics.

After winning the Palme d’Or at Cannes, and a British release that inspired activism across that tiny nation, “I, Daniel Blake” played the New York Film Festival and then in the year-end stocking of awards and list-making, got lost on its way to American movie houses. New York reviews that accused Loach of repeating himself—telling a story of the tribulations of a good man against societal indifference; caring, still, about the working class—delayed its wider release. The timeliness of its Chicago release could be hardly more fitting, a few months after a new administration began to develop bullet-pointed wish lists of how to eradicate the kind of programs that help disadvantaged Americans in temporary straits like our man Dan.

Paul Laverty’s screenplay is incisive and cheekily profane, as with most of his long partnership with Loach, while Johns’ witty habitation of Dan builds to emotional crescendos that shake with great dramatic force. And like another British filmmaker of his generation, Mike Leigh, Loach is too often disregarded as a graceful director of the camera, whose attention to frame and delicacies of light can quietly ravish. Loach is aided indelibly in this case by the gifted forty-seven-year-old cinematographer Robbie Ryan, whose work includes the ruddy beauty of films by Andrea Arnold, including “Fish Tank,” and “American Honey,” as well as Loach’s two most recent features, “The Angel’s Share” and “Jimmy’s Hall.” In the end, “I, Daniel Blake” is most political in its insistence that the smallest “I” matters, but as at his best, like his 1990s work, “Raining Stones” and “Ladybird, Ladybird,” Loach’s film is about empathy, a portrait of ordinary people, blunt, bracing yet loving and far, far from mere polemic. 100m. (Ray Pride)

“I, Daniel Blake” opens Friday, June 2 at the Music Box.