The Music Box 70mm Festival is five years old, with twelve features weighing in at close to two tons of large-format celluloid. The effort’s as much a celebration as a well-orchestrated archival feat.

Twenty-three films have been shown since 2013, including familiar attractions “2001: A Space Odyssey,” “Lawrence Of Arabia” and “West Side Story.” There are four repeats in 2017, including the main attraction, a week’s run of “2001: A Space Odyssey,” “Interstellar” (before the debut 70mm run of Christopher Nolan’s “Dunkirk”), “Spartacus” and “West Side Story.”

“We have a great team of projectionists, and many of them have been here for years,” Music Box technical director and assistant programmer Julian Antos is quick to point out when we caught up with him right after programming was finalized. “Without them the festival would not be possible!” (Antos and his co-founders of the celluloid-stalwart Northwest Chicago Film Society, Kyle Westphal and Becca Hall, were highlighted in the 2015 “Film 50.”) 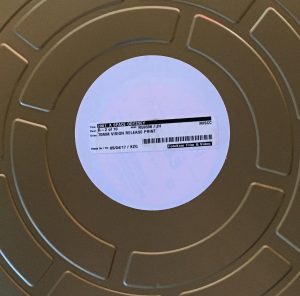 Tell me about the Music Box-commissioned “2001” print.
This print was made by Fotokem, which is the last full-service 65/70mm lab in the United States, and was made from a restoration internegative produced in the early 2000s. We became interested in creating a new print when we saw the American Cinematheque had commissioned a print last year. Why should L.A. have all the good stuff? We also wanted to put our money where our mouth is when it comes to supporting film exhibition. Seeing “2001” in 70mm is one of the best arguments you can make that film projection is an essential part of the idea that cinema is art, and this is a gesture to prevent film projection from going away. Warner Bros. and Fotokem were both great to work with, very supportive.

What does a virgin 70mm print of “2001” smell like when you open it up?
Oh, it definitely has that new film smell. Shipped straight from the lab on cores (rather than mounted on reels or platters). Even when film was run all the time, it was rare to get a print that new. Not a mark on it! It’s so much better than new car smell, and it lingers in the nose a bit while you’re watching the movie.

How much does all this freight weigh?
Each 70mm print weighs thirty-to-forty pounds per reel, so around 300-400 pounds per feature.

Does the Music Box have a dumbwaiter or something? How do those reels get up into the booth?
One reel at a time, it’s not fun!

Let’s get into the technical aspects. I’ve projected 16mm and 35mm, but never 70mm. How easy is it to wreck a print?
It is very, very easy to damage these prints. For prints with magnetic audio, a track can be damaged or even erased if the tapeheads and projector aren’t demagnetized, and there’s no way to repair that. One of the prints of “2001” we had in the past had a little click on the soundtrack through the entire film, because a previous venue had a slightly magnetized sprocket. Click-click-click. The more modern prints, which are on thinner, polyester stock, have a habit of slapping around violently and are very easy to scratch, so if the projectionist doesn’t have everything threaded perfectly they will get dinged up pretty fast. But if everything is properly aligned, and the projectionist is careful, you can run a print hundreds of times without any issues. We run scratch tests before every 70mm engagement, which involves running the same loop of film through the projector 1000+ times to make sure we won’t cause any damage. Weirdly, focus is a lot harder even though the film is sharper. The gate has to be one-hundred percent perfectly aligned or the uneven tension will cause soft focus in part of the image.

There are two kinds of romance about this kind of spectacle, and that’s in the seats as well as in the booth. But for you, upstairs at the theater, what’s the most thrilling thing about participating in this onslaught of dancing grain?
With 70mm, there’s sensory overload. It can get very loud and bright and detailed and overwhelming, which is great, but it’s also very subtle. There’s so much detail that every time you watch a movie like “2001” you’re seeing something new, and the range of color and depth of the contrast are positively decadent. So you can rattle an audience’s eardrums and burn their eyeballs, but it’s the painterly quality of it all that I like the best. 70mm is really a gentle giant. You wrestle with it in the booth a bit and then it sings for you.

How has the programming evolved?
We changed the formula last year by adding blow-up prints or prints of films that were originated on 35mm. We didn’t do that before. That opens up the selection of titles, but you also have to acknowledge that they’re a different animal than their shot-on-70mm counterparts. I ran a reel just a few days ago of Robert Altman’s “Short Cuts,” and it looks really lovely. But it doesn’t have that overwhelming sharpness of “Lawrence of Arabia,” and it was shot on super-35, which has a relatively small negative area. So it’s actually quite grainy, but it’s still a very nice, well-made print. A lot of the times these blowups are from the original camera negative, or at least a very carefully made internegative—only one generation removed—so they’re more carefully made than their 35mm counterparts. And the sound on “Top Gun” is going to blow the roof off.

Aside from there being so few 70mm releases, historically, I can’t imagine there are even that many of these huge prints of those pictures that have endured.
I put the program together and indeed, the slate is extremely limited by what is available. Sometimes people ask us to show films in 70mm that never had 70mm releases! There were no 70mm prints of “A.I.” or “The Revenant,” for instance. A lot of the 70mm titles from the fifties and sixties, like “Ben-Hur” and “Oklahoma” simply don’t exist in good prints. Any original prints would have badly faded color by now. So we rely on the few titles that were lucky enough to be reprinted. A lot of prints of eighties blowup titles were junked when nobody wanted to show them in the nineties and early aughts before “The Master” renewed interest. So we look at what’s available in good prints, and sometimes look at multiple prints to find the best one. We looked at three different prints for “Top Gun”! In many cases there is only one print, and in those instances we’re very lucky to be able to show it. We really wanted to screen stuff that hasn’t shown here before. “The Agony and the Ecstasy,” “Hook,” Disney’s “Sleeping Beauty,” “Short Cuts,” “Top Gun” and “Skull Island” are all newcomers. And we’re showing the hell out of “2001” so we wanted to throw in some more obscure ones.

What’s the biggest oddity?
“Kong: Skull Island” is going to be a weird one, a 70mm print of a born-digital movie. But we ran 35mm prints of “Magic Mike XXL” and “Mad Max: Fury Road,” both shot digital, and you get this kind of amazing texture and light that is lost in digital projection. It looks like more of a capital-M “Movie.”

Go to musicboxtheatre.com for a schedule of the 70mm festival.