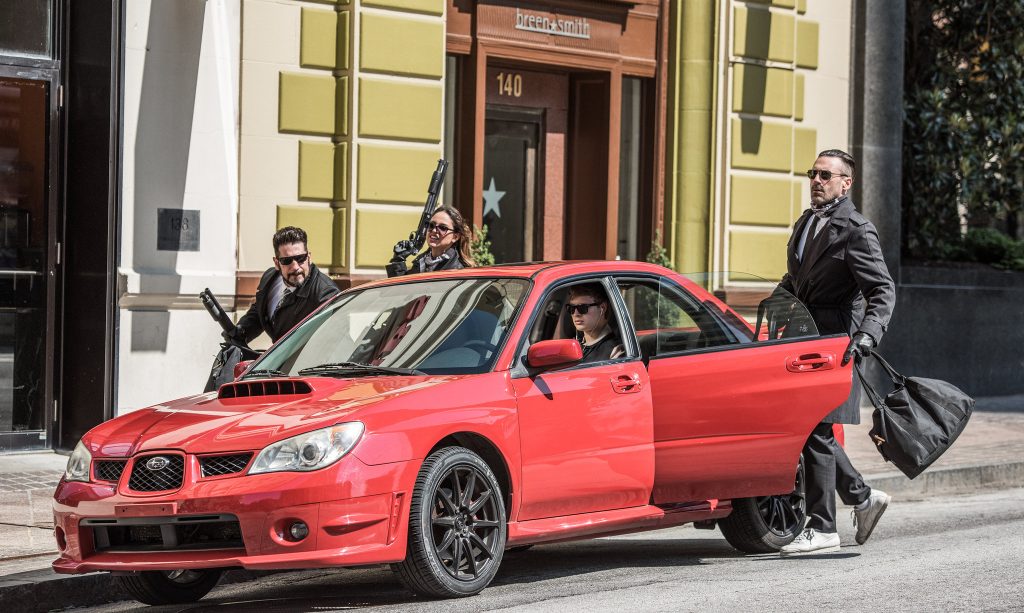 Boisterous, crackerjack, bubblegum power-pop, adrenaline-stoking coolly-choreographed manic action, fragrant with delight in its own substantial craft, Edgar Wright’s zooming genre riff “Baby Driver” is an epic car-chase confabulation. But it’s also a gentle fable about loss and redemption, and jukebox musical, packed with nearly forty needle drops, most played for their duration. It’s also a kind of jukebox of film homages, some bold, many subtle, for the noticing or not, wrapped in one bursting, eager-to-please, twenty-two-years-in-the-thinking bundle of fun. I was set after the opening two sequences, synchronized to the entirety of Jon Spencer Blues Explosion’s “Bellbottoms” and then Bob and Earl’s 1966 “Harlem Shuffle.” (For Wright’s explanation of the effort required, go here.) Daffy, witty, deft, a dance within specific surroundings and on a plane of its own, “Baby Driver” is immediately about the synchronization of experience to song, with keen timing that prompts both chuckle and swoon.

Wright has described its first inkling two decades ago: “For the first time, which wasn’t the case with the Walkman or the Discman, the iPod meant people could basically start soundtracking their own lives.” A professor I had in college, one Paddy Whannel, an elder Scot, dreamt of that state of being: why shouldn’t we all dance down the street to a soundtrack of our choosing? I don’t know if Paddy’s classicist and British Free Cinema movement upbringing would have led him to embrace Wright’s virtuoso kino-canoodling, but I hope he might have. Starting with the armature of “The Driver,” the near-ascetic 1978 getaway driver picture by Walter Hill—who, not incidentally, has an audio cameo—and working with the eye-popping colors of Jacques Demy’s musicals like “Umbrellas of Cherbourg” and adding in vehicles-in-motion precision of William Friedkin’s “French Connection” and “To Live And Die In L.A.,” Wright has made a rare movie where a good three-quarters of the sequences are keenly tooled, properly framed and spring-loaded for maximum effect. (Here, have some bravura: I insist.) Additionally, the chases and foot races were largely shot on actual Atlanta locations, rather than loaded from a computer: tracing elegant motions in a dirty world does satisfy the eye.

Walter Hill’s “Streets Of Fire: A Rock ‘n’ Roll Fable” (1984), recently released on Blu-ray, provides another subterranean surge of inspiration for shameless musical-action energy. Wright brought on choreographer Ryan Heffington to assist in his action ballets, and the camera is pleased to be so often in the sweetest place. (Mekado Murphy draws out the choreography with Wright and Herrington at the New York Times.) Ansel Elgort’s “Baby” is also precise yet fuzzy around the edges: he’s a high-functioning neurotic in league with the protagonist of Melville’s 1967 classic getaway thriller “Le Samouraï.”

There are dozens of other references and comparisons and observations and criticisms to be made of “Baby Driver,” but other filmmakers have been giddy with their public praise. In thirteen tweets, Guillermo del Toro praised “Baby Driver” with phrases like “’An American in Paris’ on wheels and crack.” William Friedkin tweeted, “I saw what I think is the most entertaining and original film I’ve seen in years… Edgar Wright’s ‘Baby Driver.’” (Click for Edgar Wright’s splendid reply.) “Its a movie in love with cinema, the high of cinema and motion,” the always-generous del Toro tweeted. “Imagine that as a carpenter you encounter a precious, precise, exquisite piece of cabinetry. This is how I feel. I’ve always liked Edgar. But this moved me. It moved me to see a fellow filmmaker come out of a debacle with a movie that declares his credo again.” Go, Edgar, go. With Ansel Elgort, Kevin Spacey, Jon Hamm, Eliza González, Jamie Foxx, Lily James. 113m. (Ray Pride)