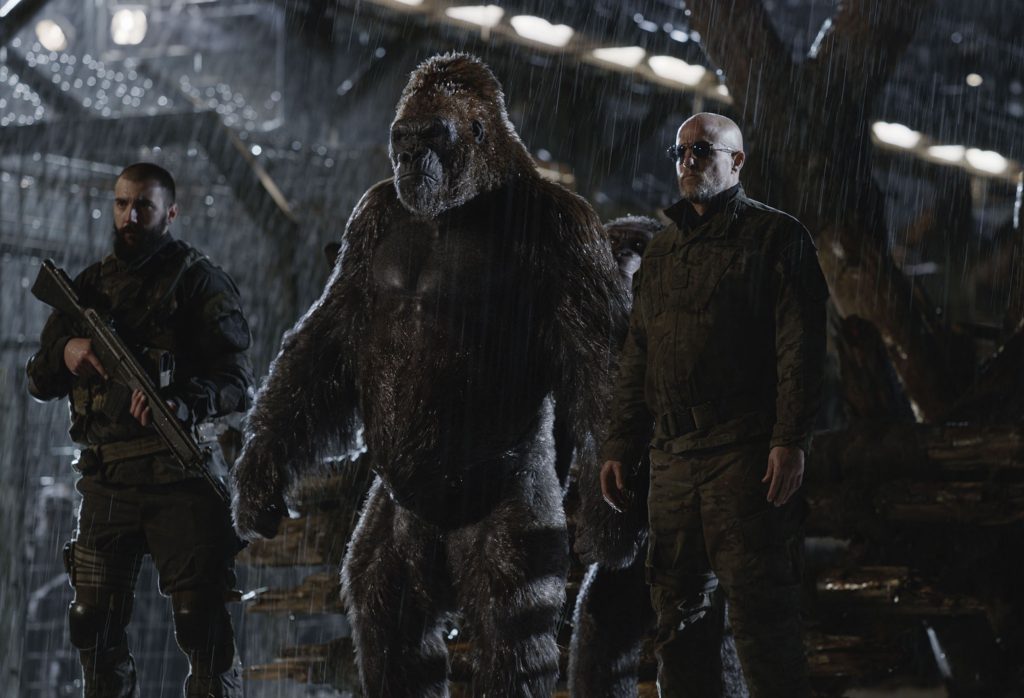 What are the clanking bits along with the cocksure forward velocity of the competent entertainment of “War For The Planet of the Apes”? Hammy actors hamming through strikingly realized CGI creature animation, such as Andy Serkis seething in his best impersonation of an actor hamming to have a category launched at the Oscars that consists only of himself that only he himself and himself alone could ever be nominated or win. A handful of hammy actors hamming as humans, such as Woody Harrelson indicating seething in his Brando-as-Kurtz “Apocalypse Now” impersonation. (War, and war movies, are hell.) A mostly deeply dark-hued wet night wooded world that has radiant glimmers of influence, not limited to apes on horseback racing through Kurosawa forests and crowd scenes in concentration camps that echo the rain-struck, border-aware 1990s Balkan films of Greek great Theo Angelopoulos. A bombastic score that knows from multiple strains of grandiloquence. Hints at cultural relevance—a madman must build a wall at all costs to keep other humans out, resources are finite—however well-intentioned as commentary blurt like sound cannons. (Allusions to Joseph Conrad’s “Heart Of Darkness,” Moses and the Exodus and America’s dark history with race simmer beneath.) A strong choice to justify working almost entirely without dialogue—except for the double-underlined thesis speeches—is the many, so many, close-ups of mute ape characters conversing in sign language. A minor tonal misfire is the dressing of “Bad Ape,” one of the ape characters that consistently speaks, played by a wide-eyed Steve Zahn, and dressed in sleeveless down vest of a certain strain of blue. Even if it echoes costumes from the original series, it also duplicates the trademark vest of activist DeRay McKesson. McKesson deleted a series of tweets on July 12 after Whoopi Goldberg tore into him on “The View,” telling him “Get over yourself… This has nothing to do with you.” For a movie with ambition to resonate with the world in the streets outside the movie house, someone on the production should have said, at the very least, “How about a different shade? How about a different color? Do you really want to allude to Black Lives Matter and as well as the trademark garb of a recognizable activist with a dead-on costume for Bad Ape?” With Amiah Miller, Terry Notary, Karin Konoval. 145m. Widescreen. (Ray Pride)

“War For The Planet Of The Apes” opens Thursday, July 13.