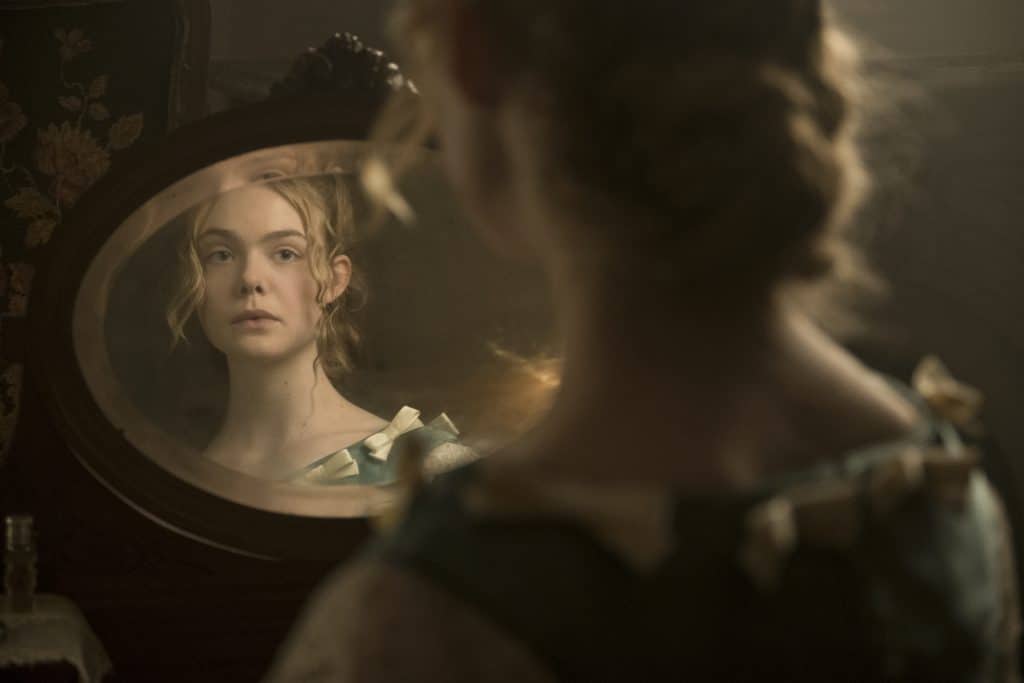 “The Beguiled” simmers and summers, a brief tapestry of swaddling, crinolined mood, agreeably comic in its gentility, then interrupted by blunt ructions. It’s a Sofia Coppola film through and through, hushed, decorous, communicating through the placement of furnishings and the rustle of costumes and exchanged glances as much as by the minimal complications of plot. Coppola paints herself as shy, and at their best, her movies capture hesitation and reticence with grace. Set in Virginia near the end of the Civil War (but shot in a very mossy Louisiana), Coppola’s adaptation of Thomas Cullinan’s 1965 novel and Albert Maltz and Irene Kamp’s screenplay for Don Siegel’s 1971 version with Clint Eastwood, “The Beguiled” proceeds in simplest terms, while elementally Southern gothic. (The woods are weird, as woods must be.) An injured Northern soldier, Corporal McBurney (Colin Farrell), is found in the woods near the Farnsworth Seminary, a boarding school for girls in a Greek revival mansion. The young women, left in isolation by men at war, take him in, tolerating the injured enemy, at least until his wounds have healed. Sexual tension rises, from the repressed, steely yet simultaneously tremulous headmistress Miss Martha (Nicole Kidman), the mothering Edwina (Kirsten Dunst), the audacious Alicia (Elle Fanning) and several younger girls. The performances are also pitched at different levels of awareness and maturity, from Alicia’s bold theft of a kiss to a gravely funny shot of Miss Martha at table, taking in McBurney’s reaction to a dish he’s tucked into with gusto. Violence occurs, sudden, goofy, gory, but largely “The Beguiled” proceeds by indirection, a minor susurration of story to match its whispers of simmering. A couple of formal dinner scenes are masterful, a roundelay of simultaneously brash and abashed gazes from the women and girls upon the tender male form supping among them. (His expression is awash in their perfume.) There is even a literal bodice-ripping, with Philippe Le Sourd’s camera low to the floorboards, a fistful of small pearls popping off and rolling into a shaft of light lolling to the window. (Le Sourd’s movies include Wong Kar-wai’s “The Grandmaster,” which includes one of the most pointed and significant shots ever made of a button popping free of a coat.) Another fragrant image lingers, a shot of the horizon marked by trees as puffs of black smoke rise in the distance, a brief nod to the opening shot of her father’s “Apocalypse Now,” the set of which she played on as a child. (Coppola and Le Sourd also express admiration for the forest of Kurosawa’s “Rashomon.”) As the mirror shot of Elle Fanning suggests, fine arts photography devotee Coppola and Le Sourd also quietly invoke the esthetic of the era’s photography, particularly the daguerrotype, with frozen, attenuated stillness from poses held, as well as a falling off of detail at the edges of shots. The sound design is impeccable, doors clicking to just so, heels clacking and echoing, with dull booms in the distance as the war persists just beyond the horizon, sounds of scuttering and scattering throughout the mansion, and finally a swell of cicadas that drowns out life itself. The women act on impulse, hope, need, no heroines here. Nor apologies. They remain in a jail of unfinished longing. If the mood moves you, Peter Weir’s masterpiece of vague yet troubling atmosphere, “Picnic at Hanging Rock” awaits you. 94m. (Ray Pride)

“The Beguiled” is now playing.