David Leitch applies the stylish welter and wallop of the kinetic “gun fu” of “John Wick” (which he co-directed) to the rousingly eye- and ear-satisfying “Atomic Blonde.” Charlize Theron plays Lorraine Broughton, your basic-issue assassin-spy-clotheshorse-kickass, a British spy tracking a double agent and a secret dossier of agents’ identities in 1989 Berlin, just before the fall of the Wall and the end of that particular Cold War. Leitch frames stunts to include entire bodies, and lets shots run long to demonstrate the kinetic potential of crunching and bloodying and crunching some more. The most malevolently inventive hand-to-hand bruising and busting is a sequence running nearly eight minutes across several floors of a disused government building, with multiple landings and stairwells and manifold foes. The action is as fucky as fuckiest foreplay. And Theron is perennially present, sullen sculpture. No need for backstory, no need for maudlin sentiment. There are a couple of love scenes with a French spy that impress with the blocking and cutting of the twining of two female bodies: understated and discomfortingly erotic. Present; tense.

The Hungary-shot simulacrum of two bustling Berlins brandishes bold looks, from an interrogation room akin to a “Tinker Tailor Soldier Spy” setting, to swathes of hot neon that could make “Miami Vice”-era Michael Mann flush. In every setting, the corners of the frame feel littered with sweet small details, dense with layers of catch-it-or-don’t pop-culture borrowing. The bright, relentless palette of the film’s reported eighty-five sets also suggests late Fassbinder, with pointed color-scheme parallels to his Berlin nightclub-set “Lola” (1981), which starred Barbara Sukowa, who, whaddya know, plays a strict coroner here. Theron’s costumes are high and low and sometimes unlikely: high-heeled boots in a showdown behind the screen of a theater showing Tarkovsky’s “Stalker,” but the delirium that seems to mix and match of Versace of that era with items like a BOY LONDON t-shirt, and what are likely thrifted items, always suits the scene, and more importantly, the visual kick of a female character who would brook no comparison to J—- B—. One of her first feats of defense comes at the spike of a cherry-red pump. 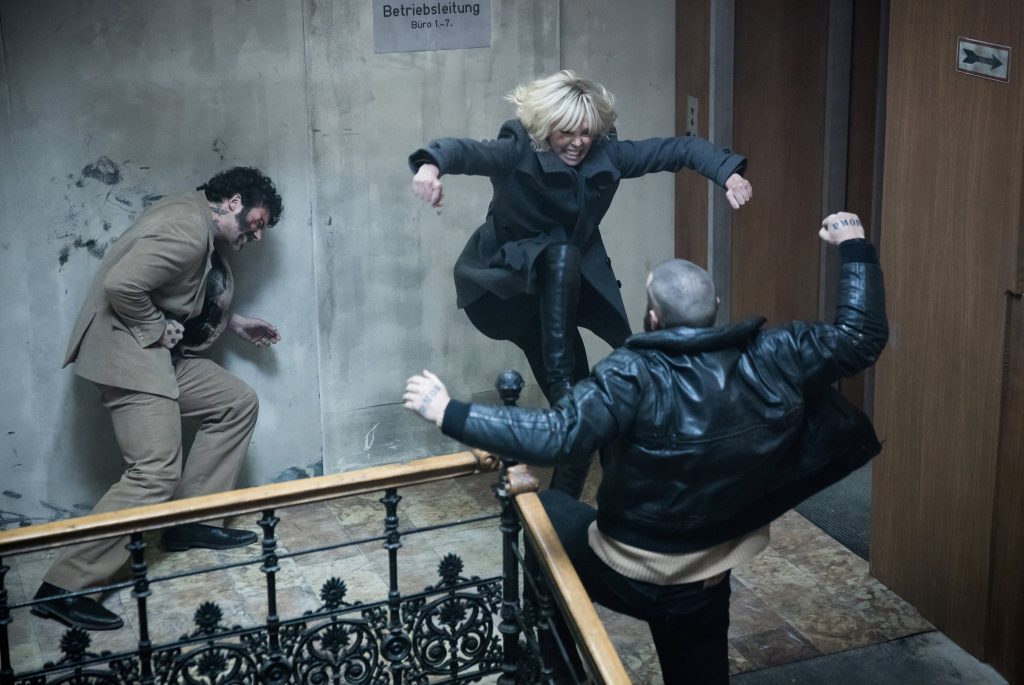 The song-bursting soundtrack cherry-picks the bright artistic moment, with glee, without shame, brash headphone kino. A female friend suggested it readily double as a punchy workout mix, which is, kinda-sorta, how Lorraine uses it, exertion by exertion, to the very end. There are two David Bowie songs, “Putting Out Fire” and “Under Pressure,” but no “Heroes,” although there is a ghostly simmer of Bowie’s inspiration, looking from a hotel room across the wall to glimpse life still proceeding from kiss to kiss in the East, in an exchange between Lorraine and a choleric CIA agent (John Goodman) at the Wall.

Here’s a dollop: New Order’s “Blue Monday” and ”Blue Monday ’88;” Public Enemy’s “Fight the Power;” Nena’s “99 Luftballons;” After the Fire’s “Der Kommissar;” The Clash’s “London Calling;” Siouxsie & The Banshee’s “Cities In Dust;” Re-Flex’s “The Politics Of Dancing;” and stirring needle-drops of ‘Til Tuesday’s “Voices Carry,” Depeche Mode’s “Behind The Wheel” and A Flock of Seagulls’ “I Ran (So Far Away).” An innovative takedown that crashes an entire upscale apartment is weirdly moving in its application of George Michael’s “Father Figure.” But all the choices accelerate and transport, once you embrace Leitch’s uber-on-the-nose matching of action to music.

”When I read the script, I immediately wrote down songs that were speaking to me,” Leitch told the Hollywood Reporter about the generous, limber lacquer of period pop applied generously throughout. “After the challenge of how do I make this pop-culture mash-up in more of a commercial-fun way, the first instinct was ‘I want to rely on eighties music to transport us.’ Music emotionally and psychologically transports you immediately. So I put together my playlist and I’d play that over and over and we’d play it on set in the scout van, and I started to slowly drop those specific songs into the list as we scouted, into the script. ‘Voices Carry’ came on very early in terms of the ironic lyrics of everybody listening in on each other, and I liked that. ‘Putting Out Fire’ came on really early as well in terms of that bombastic nature and someone who’s not afraid to pour gasoline on what is already a fire. By the time we started shooting, all of those songs were being played during the sequences as we filmed them.” Based on the Oni Press graphic novel series, “The Coldest City,” written by Antony Johnston and illustrated by Sam Hart. With James McAvoy, Til Schweiger, Eddie Marsan, Sofia Boutella, John Goodman and at least thirteen credited producers. 119m. (Ray Pride)