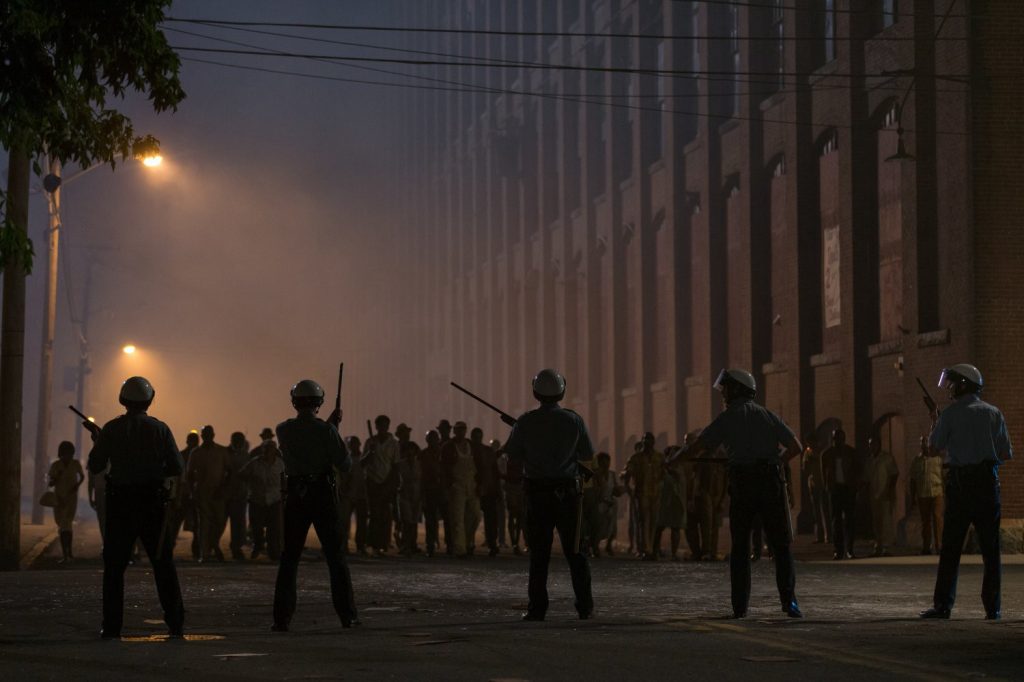 Racism: it’s coming from inside the house. In Kathryn Bigelow’s “Detroit,” a social-issue tapestry of shock and outrage that also overflows with visceral horror, microcosms converge and detonate during the summer 1967 Detroit rebellion. The narrative in Mark Boal’s screenplay expands from the single-character perspectives of her two previous pictures, but ultimately culminates in a close-up that conveys a lifetime of hurt across a single face: the story rests now on troubled features. “I found myself working in horror­ genre veins,” Boal wrote, sketching their intent for New York magazine, “except that in my case, the supernatural element was replaced with the all­-too­-real terror of racism.” Bigelow and Boal set the stage for a city with a coursing crowd from overlapping perspectives, with unpredictable figures at every turn. But in its central hour, the filmmakers confine themselves to a confrontation against more than a dozen guests of the Algiers Motel by racist Detroit Police as well as the Michigan State Police, the Michigan Army National Guard and a private security guard.

“I’d written something quite unlike the singular focus and sole protagonists of ‘The Hurt Locker’ and ‘Zero Dark Thirty,’” Boal wrote, sketching their intent. “The effort to make ‘Detroit’ a mirror of the chaotic times led to an ensemble piece, quickly shifting between characters in a nesting doll of movies within movies, a riot film that gives way to racial horror-crime that switches to a courtroom drama, with detours along the way into a band’s journey, the miseducation of rookie cops, and the adventures of a pair of young women experimenting with sexual freedom. It was, in short, a lot of ground to cover in a single picture. But Kathryn was encouraging, and over the proceeding draft we collaborated closely to hone the themes and scope, while attempting to keep alive the spirit of a tough and untamed narrative.”

.@realDonaldTrump I invite you to see our movie DETROIT.
It’s time to change the conversation. pic.twitter.com/Ge2MbAUBjH

“Tough and untamed” is understatement. “Motherfuckers, man” is one of the first declarative statements among artfully strewn monosyllables. A tapestry of a city tearing itself apart in the face of police violence is captured with superficially undisciplined imagery, emulating newsreel style and including the swooping camera often favored by Bigelow and cinematographer Barry Ackroyd (who shot her two previous films; “United 93” and much of latter-day Ken Loach). Yet each frame’s content is tightly measured and controlled, including the choices of archival footage or dramatic black-and-white historical stills. Bigelow’s re-creations of down-at-heel Detroit locations (shot in Boston), include a consistent variation on the style of neon signs of the time, with shop windows sometimes lit by only a single bright word: “Bar.” “Gas.” “Beer.” A gun shop’s hot pink rifle neon. Or a gas station’s Gulf sign situated directly between the community and the cops before the first, tentative eruptions of opposition and shouts and bottle-throwing. The loose yet always tense compositions, and such specific set dressing seep into the larger picture, evoking Bigelow’s origins in the art world, brushing pop-art influences atop her volatile landscape.

But “Detroit” turns inward, toward sustained assault, devolving to that single location, the Algiers Motel, where a prank popping off a starter pistol prompts an hours-long, night-long siege, drenched in threat and threatened, rage-filled masculinity and whiteness. Terror and rage fleck the screen with spittle and blood and invective and bleak realization of irresolvable horror. The potential for sudden death resides in each glance, and especially in each returned glance. And the consistent belittling, “othering” language from the worst of the racist cops: “I got nothing against you people.” Language is as much a truncheon as the whip from a pistol. Two young white girls visiting from Ohio get the most pointed lines, nearly on-the-nose, able, for at least a time, to assert their privileged voice while the others cannot. “It’s 1967, asshole,” resonates as much as “Is this fucking 2017?” 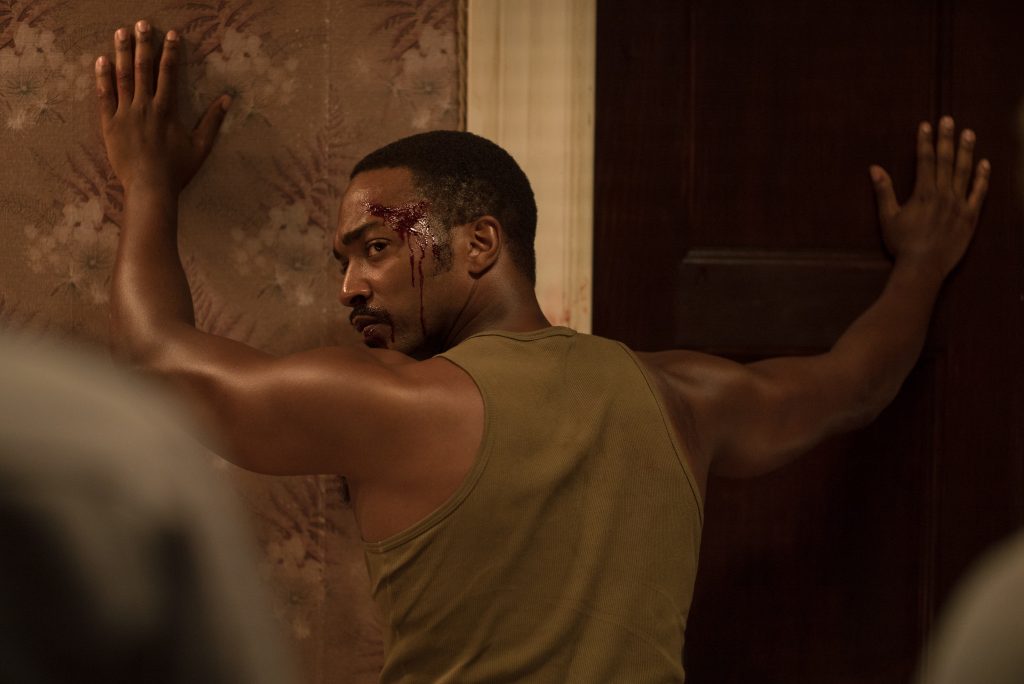 The explicit terror onscreen, conveyed with extreme specificity, constitutes confinement, restraint, within a sustained assault, a delirium that feels without end. In both fictional and historical terms, you know these characters will not recover. The minute-to-minute psychological and physical violence has shaken several articulate writers. Notably, before publishing her review at RogerEbert.com that expressed revulsion toward “Detroit,” Chicago-based critic Angelica Jade Bastién tweeted: “I am not interested in white perspectives on black pain.” In her later essay, she expands, “I was disturbed so deeply by what I witnessed that I left the theater… in tears. It wasn’t the relentless violence inflicted upon black bodies or the fiery devastation of the riots ripping apart Detroit but the emptiness behind these moments… I realized that I’m not interested in white perceptions of black pain. White filmmakers… have every right to make stories that highlight…. histories of racism and police brutality that pointedly affect Black America [but] ‘Detroit’ was directed, written, produced, shot and edited by white creatives who do not understand the weight of the images they hone in on with an unflinching gaze.”

Among other upraised voices, film scholar Girish Shambu invoked Bastién in claiming that Bigelow’s film contains “gratuitous violence inflicted on black bodies (analogous to sexual assault and murder of women in [‘Strange Days’]).” “We wanted viewers not so much to watch the story as absorb it like a physical sensation,” Boal wrote. “This necessitated certain narrative devices, in order to slip the whole thing past the resistance viewers often have allowing troubling feelings to get in.”

“Detroit” goes wide on Friday, August 4. Bigelow’s most extensive interview so far is in the August 1 issue of Variety.