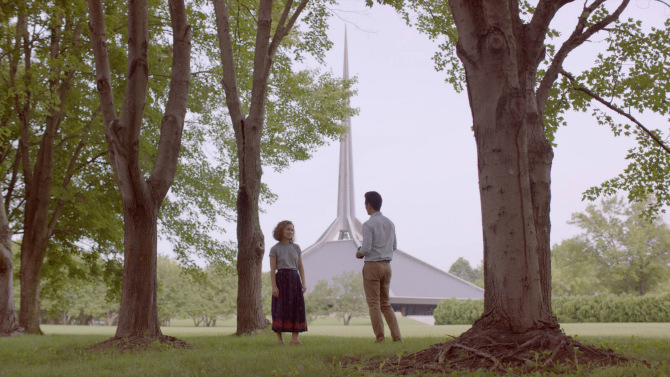 A strange and beautiful place, Columbus, Indiana, in the midst of cornfields and countryside and home to 46,000 people and a cool range of architectural commissions from modern architects including I.M. Pei, Harry Weese, Robert Venturi, Eero and Eliel Saarinen and César Pelli. (Seven of the buildings are National Historic Landmarks.) It’s a dreamy all-American clash, the beautiful of form made strange placed up against the visual iconography of the placid Midwest. Walking the small town’s streets is one happy hallucination after another. Highly-respected, oft-lyrical video essayist-turned-writer-director-editor Kogonada’s first feature, “Columbus,” is an elegantly paced, serenely composed telling of an encounter set within the expanses of the southeastern Indiana town. Here’s how Seoul-born-but-Midwest-proud Kogonada has described his first sight of the place: “I read about this mecca of modernist architecture in the farmlands of Indiana. Walking around, I encountered… an undeniable poignancy to it all—this quiet town in the conservative Midwest functioning as a living (and ghostly) museum to the promise of modernism.” Following that inspiration, his screenplay charts a meeting of two strangers a native (Haley Lu Richardson) and a visitor (John Cho) whose architect father went into a coma while touring the town. Both contemplate loss and grief. Kogonada’s favored filmmakers include Yasujiro Ozu and Kore-eda Hirokazu, and their influence is worn lightly but well in his assured debut. Emotion swells, and the landscape, the frames and the utopian architecture inextricably fuse to entrancing effect. With Rory Culkin, Michelle Forbes, Parker Posey. 104m. (Ray Pride)

“Columbus” opens Friday, September 8 at the Music Box. Kogonada will appear for Friday shows and after Saturday’s 415pm show.