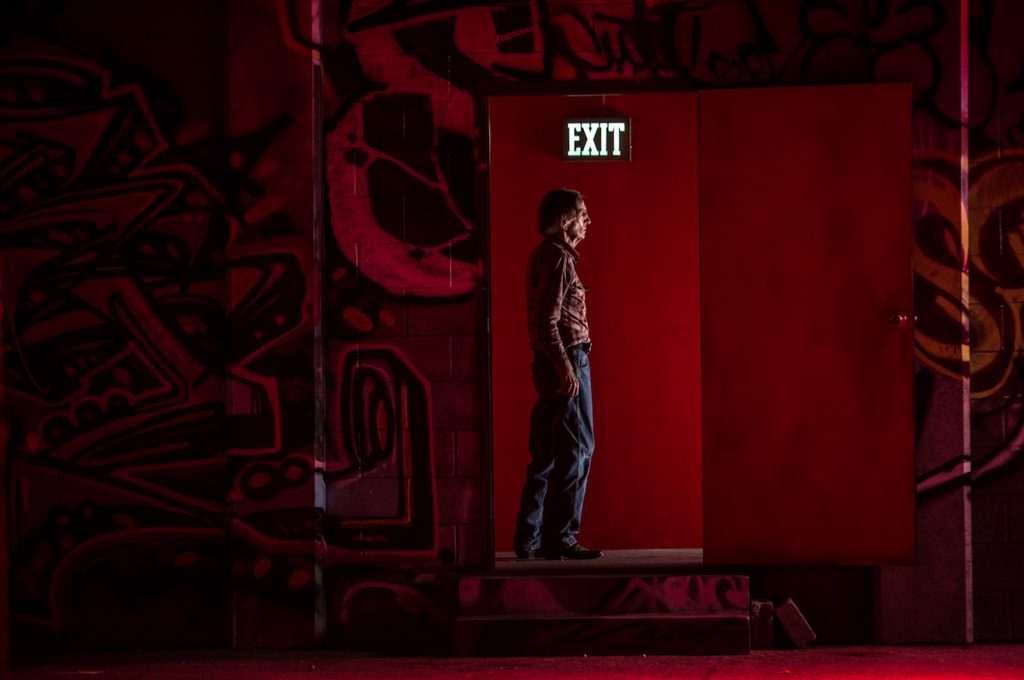 “Lucky” is a small, lovely treasure, a biographical love letter to the great American actor Harry Dean Stanton, who died in September. Irritable ninety-year-old Lucky lives alone in a desert town and we follow his days as he does morning yoga and day-long cigarettes and afternoon beers and crosses paths with the other citizens as well as intimations of time’s rapid flight. It’s also a documentary of Harry Dean’s haunted eyes and lived-in face and elder body. Plus, it’s funny and philosophical, punchily short, very much like a short story. In Lucky’s first exchange, he tells a diner boss, “You’re nothing,” who replies, “You’re nothing.” And Lucky coos, “Thank you.” Strange, simple, gorgeous, troubling. I talked to beloved character actor-turned-director John Carroll Lynch before the Music Box premiere of his directorial debut at the Chicago Critics Film Festival.

The character’s path gives us Harry Dean Stanton in all his shaggy dog glory. Yes, it does! 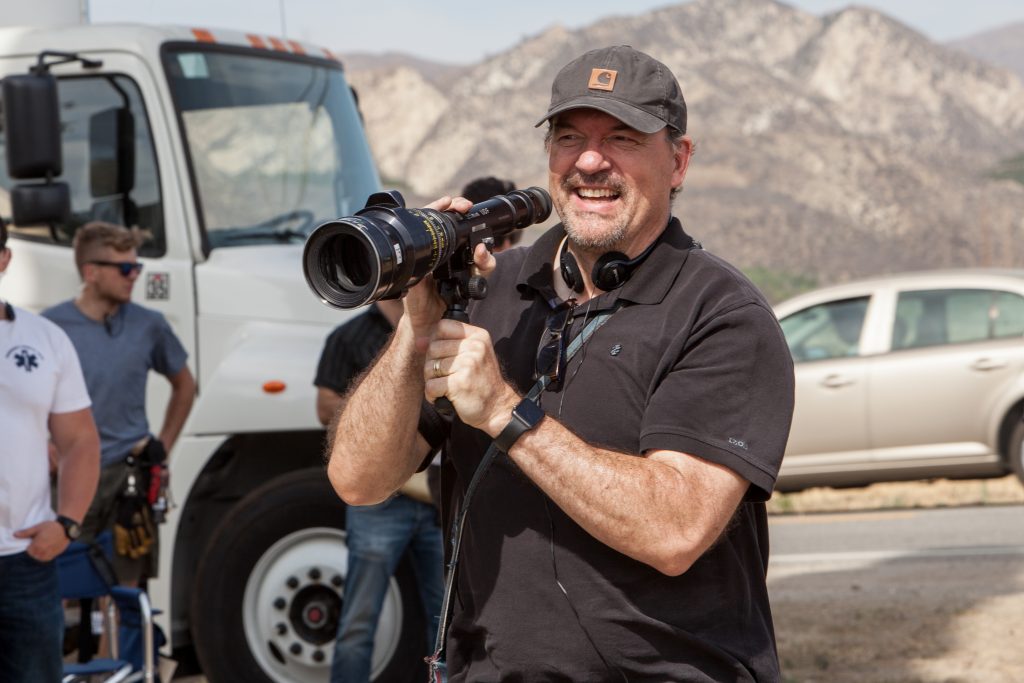 Co-screenwriter Logan Sparks had been Harry Dean’s assistant?
Yes. Logan Sparks met him through “Big Love,” then started working with him. Logan’s an actor, a writer and producer and Drago Sumonja is a friend of mine. I met Harry Dean through Drago and Dabney Coleman. Drago directed a beautiful documentary called “Character,” about acting, where Dabney interviews Harry Dean Stanton, Mark Rydell, Sydney Pollack, Peter Falk and Charles Grodin. It’s beautiful, a really lovely film. I met Dabney and after that I met Harry Dean at Dan Tana’s. This was a long while ago, I don’t think he would have remembered me. It was about 2014 when they started working on the script and they brought it to me to act in in June. Drago knew I wanted to direct and he had talked to me, he said, “y’know, we want Ed Begley to direct it, but I have been thinking about you directing this thing, but we want Harry to be comfortable.” I totally got that, I was perfectly happy with acting for four days. Sounded good to me! A couple months later they called and said, “Listen, Ed’s really busy with his environmental stuff, he’s on ‘Better Call Saul,’ would you be interested in directing it?” I said, well, first, ask him if he’s still doing it. And Ed said, “I just can’t find the time to focus on it.” I told them what I thought the story of the movie was while I was on a conference call in a laundromat in Atlanta, waiting for my clothes to dry. We all agreed on it and we started working on the script, not to change much, but to just make sure that everything tied to the central journey that Lucky was on. Then we started getting a budget. With an eighty-nine-year-old lead, you really can ask for a quick “no.” But nobody said no.

There’s a lilting level of absurdism in the script, in some of the wonderful lines of dialogue, that really require terrific, focused actors, and you have them here, with Harry and David Lynch and Ed Begley Jr., Tom Skerritt and Beth Grant. The behavioral verisimilitude hums in every performance.
Harry Dean, as an actor, doesn’t tolerate falsehood. It just doesn’t play well. And while the screenplay is poetic, it’s true. The characters are filled with a kind of truth, and each actor brought that out. It was important that I support the realism of the movie, even though it’s a poetic film, even though in some ways it has magical realism in it. The magical realism in the movie is played in such a real sense: it’s concrete. So it doesn’t ever lose itself in a kind of lyrical flowering. That being said, I loved the lyrical qualities of the screenplay, I loved the poetry. It’s one of the things that drew me to it and that drew me into the conversation with the cinematographer, with the art director, with everybody, to create a world that was real, concrete and poetic at the same time. 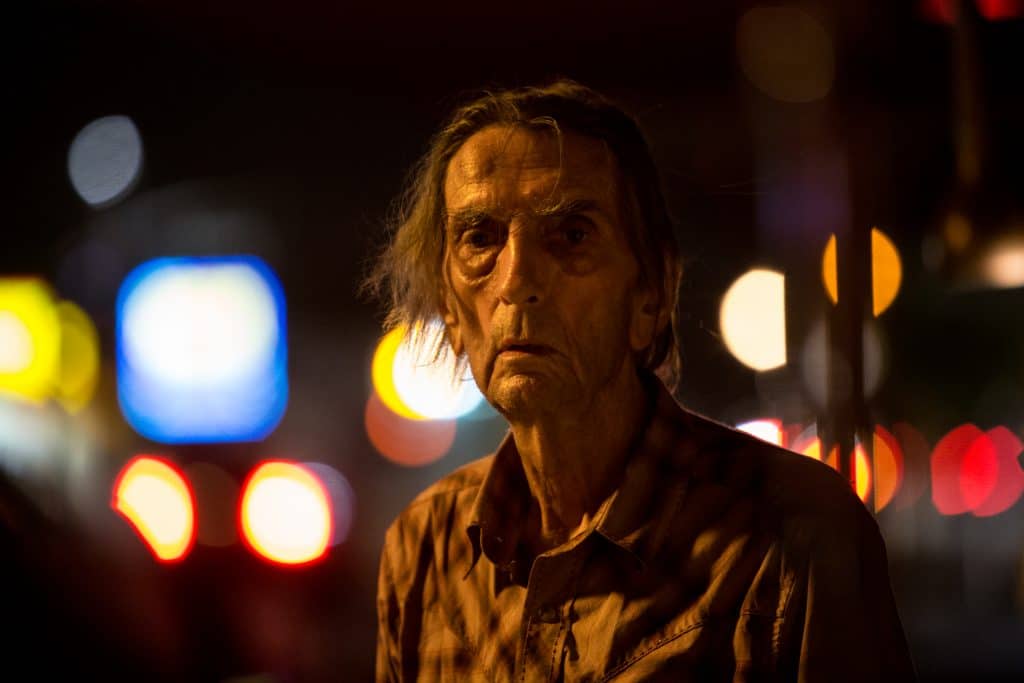 “There’s only one thing worse than awkward silence,” Lucky says in the patient and lovingly orchestrated introduction to locals in the bar, “Small talk.” And David Lynch, the master of loping, honking line readings sitting right there next to him at the bar.
Harry’s saying of that is so beautiful, ’cause he balances the words small and talk in a very specific way.

I could see the exchanges in the bar playing on stage, but the scenes’ tempo have a cinematic poetry, the pacing, the blocking—
It’s a visual film. Even though it has a lot of poetry in it, in terms of dialogue, the screenplay and the attack of the movie is visual. It has a lot of silence. It needs the space and the air around it. The visual relationship of the main character both in terms of the desert and in terms of his house, his space.

We know we’re in for something interesting when the film opens with Lucky’s morning montage, his yoga, his cigarettes, the akimbo framing showing him in his space. Routine toward eternity.
Yes. This juxtaposition of vitality, physical vitality of Harry Dean, versus the thin-skinned frailty of mortality. It’s that you can be as vital as Harry Dean is and be as close to the end as you are, at the same time.