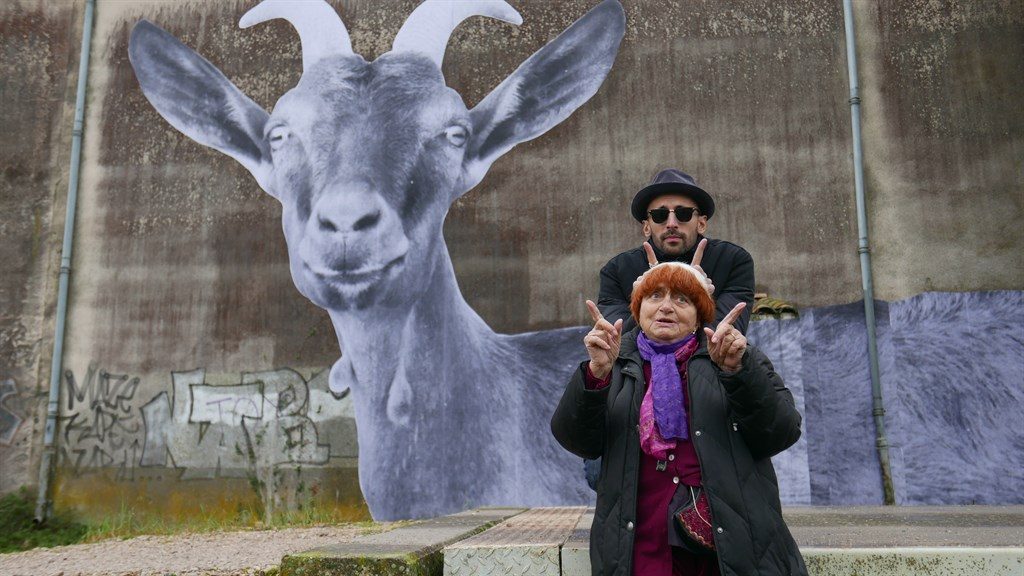 I have memories of meeting Agnès Varda, the bantamweight master of the lightly magical film essay. One is of the diminutive but vastly generous filmmaker in a polka-dot dress, large white dots on a navy dress, twirling gently along the cobbles of a pier at the port of Thessaloniki, Greece, the azure bay and a ghostly Olympus providing backdrop. Agnès danced; Agnès smiled. She stopped and asked the festival director, “Michel! Do you know a Greek song?” More recently, I was honored to be at a small dinner party where all hell broke loose, turning into a sustained set piece of physical comedy. “Tati?” I leaned over and said. “Oh, no,” Varda said, delight dancing in her eyes, “Blake Edwards! Let us pray, Blake Edwards!” I forgot her age in a twinkle; she’s eighty-nine this year, but her delight was a child’s, or perhaps a genuinely inquisitive, ageless sixty-five-year-old.

“Faces Places” (Visages, Villages), her collaboration with thirty-three-year-old muralist JR, is a blissful gift and surprising, gratifyingly coherent contribution to her body of work. Varda and JR take off in his photographer’s truck and make a circuit of small towns, meeting villagers, making portraits, creating murals. A comment Varda made of one of their subjects—“People are intense when it comes to their work and words. That woman grew very impassioned about goats and their horns, her conviction was impressive”—is emblematic of her très genial rapport and endless curiosity about casual encounters that deepen under her gaze. One notable passage comes from following up portraits of dockworkers in Le Havre with a call for their wives to join them at the port. Like “The Gleaners And I” (2000), Varda breathes life into diffuse material, finding the grain in each encounter. What’s fresh and vital in the fabric of “Faces Places” is the melancholy bond between two artists at different points in their career, amusing one another while fashioning the world into a shared vision. 89m. (Ray Pride)