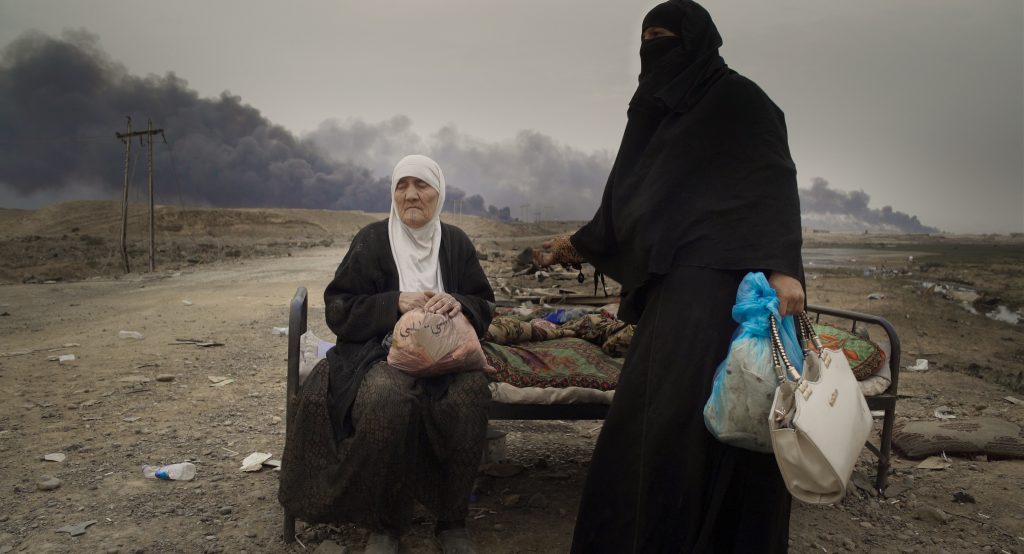 Artist Ai Weiwei works brilliantly at commanding scale, and the 145 minutes of “Human Flow” is no exception, capturing in teeming, intimate detail the daily life of a sampling of the traffic of nearly sixty-six million displaced persons around the world. Faces matter as much as massed crowds, snaking lines, gatherings at walled and wired borders, paused in their ocean crossings, their desert treks.

Shooting in twenty-three countries across a year with more than 200 crew members, Ai linked a succession of exoduses through countries including Iraq, Greece, Mexico, Italy and Israel. He had not planned to mount this scale of production, but his observations accumulated, witness took him along and carried him away. The patchwork of images of hope and survival is nimbly assembled by Niels Pagh Andersen, editor of Joshua Oppenheimer’s bold documentary essays, “The Act of Killing” and “The Look of Silence.” Tragedy and its potential to eddy ever outward are present, but Ai’s keen eye for heightening an essentially vérité shooting style capture telling moments with splendid acuity.

Ai’s sculptural projects of scale tempt cartoonishness, even buffoonishness, through repetition of hundreds and thousands of objects, but once set to exhibit, have near-transcendent impact. Small things—bicycles, the backpacks of children who died in the collapse of a school, porcelain sculptures by the hundred thousand of the shells of sunflower seeds—imply larger structures, rising from banal accretion to breathtaking assemblage. The permutations of “Forever Bicycles” in multiple installations dazzles in elemental repetitions of a thousand or fifteen-hundred bicycles. A more pertinent example would be Ai’s work wrapping Berlin’s Konzerthaus in over 14,000 orange life vests recovered from refugees who landed on the Greek island of Lesbos.

Along with his large-scale art installations worldwide, Ai also directed several documentaries in China, capturing the aftermath of crises and cover-ups. For his efforts, he became a displaced person in his own country, jailed on trumped-up charges for eighty-one days in 2011 and fined nearly $2 million. (Now he lives and works in Berlin.)

“As an artist, I always believe in humanity and I see this crisis as my crisis. I see those people coming down to the boats as my family,” Ai relates in his director’s statement. “They could be my children, could be my parents, could be my brothers. I don’t see myself as any different from them. We may speak totally different languages and have totally different belief systems but I understand them. Like me, they are also afraid of the cold and don’t like standing in the rain or being hungry. Like me, they need a sense of security.”

“Human Flow” offers stateliness and tempo as correctives in depicting hardly fathomable, inexorable catastrophe. States fail and wars murder and genocide persists. ”As a human being, I believe any crisis or hardship that happens to another human being should be as if it is happening to us,” Ai says. “If we don’t have that kind of trust in each other, we are deeply in trouble. Then we will experience walls and division and misleading by politicians that will make for a future in the shadows.”

The bright images of Ai’s film are often seductive, then troubling, as in the soothing, even nurturing blue of inlets at dusk, soon dotted with a small ship, toppling with passengers in bright orange life vests. There are also low-flying shots from drones of demolished, abandoned cities, of tent cities, of refugee centers. A couple of figures from numbers arrayed: 277,000 refugees in Iraq have fled Syrian butchery while there are also four million displaced Iraqis. Ai’s eye is exquisite, but not in a maundering, unselfconscious fashion, but in the sense of frame and texture and moment, alive, breathing, tear-tugging from fact observed, not sentimentality imposed. Willing, nay, insisting on holding on a face, a figure, a drone-seen stretch of savage destruction for miles of what was once a poor but functioning community.

“Art has to be involved with the moral and philosophical and intellectual conversation. If you call yourself an artist, this is your responsibility,” Ai says in the film’s press kit. “Your job as an artist is expression, so it is equally important to express your concern about humanity and your values. If I have to define art, art is something that has no form, no shape, nor any kind of restrictions. Art is a way to fight for inner freedom. It is also the fighting itself. Art is not just something you hang on the wall or decorate your house with—art is directly related to understanding who we are, what kind of world we live in and what kind of dreams we have.”

Ai transforms nightmarish material into a dream we can understand, expressing scope of the world and how artificial boundaries work against human potential, in terms of economies, beliefs and simply, dignity. Sweeping and swirling, “Human Flow” puts faces, so many faces, to the great organism that is our home, this teeming globe.