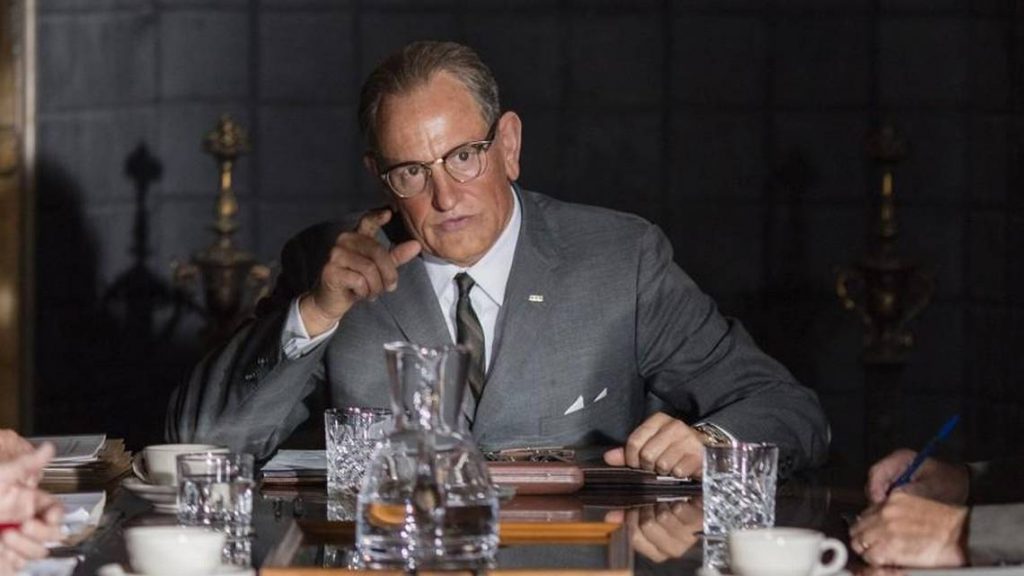 I’ve read, admired, re-read much of the 3,500-plus pages of eighty-two-year-old Robert Caro’s life’s work, his eventually-to-be five-volume life of thirty-sixth president Lyndon Baines Johnson, “The Years of Lyndon Johnson.” Breathing, and seething with detail, Caro exceeds even the writerly angel’s work of “The Power Broker,” his 1974 biography of New York urban planner Robert Moses. Rob Reiner’s nineteenth feature as director, a haphazardly kaleidoscopic ninety-eight-minute biography of a few moments of LBJ’s life, “LBJ,” from a 2014 Black List screenplay by “Project Runway” producer Joey Hartstone, is an aggravating glide atop surfaces, bound by conventions of realism and monstrous makeup. (“LBJ” is no “W.”) Texan Woody Harrelson of the fleet, trickster countenance is mudbound by his layers of facial appliances, nearly as dense, certainly as confining, as the cheeks of the Lady in the Radiator in “Eraserhead.” Still, Harrelson rollicks with the necessary carpet-bombing of choice obscenities. The great Jennifer Jason Leigh, who plays Lady Bird, is also provided a heavy Halloween-quality mask to perform beneath. Richard Jenkins, as LBJ adversary Senator Richard Russell, rigid with racist distemper, tempts to burst from the confines of chronology, and, is, as always, excellent. For a diverting variation on LBJ, his era and his keenly calculating vulgarian persona, Robert Schenkkan’s “All The Way,” adapted for HBO after its 2014 Broadway run with Bryan Cranston, is rich entertainment. And Caro’s books? Astonishment for hours upon hours upon days upon weeks. 98m. (Ray Pride)