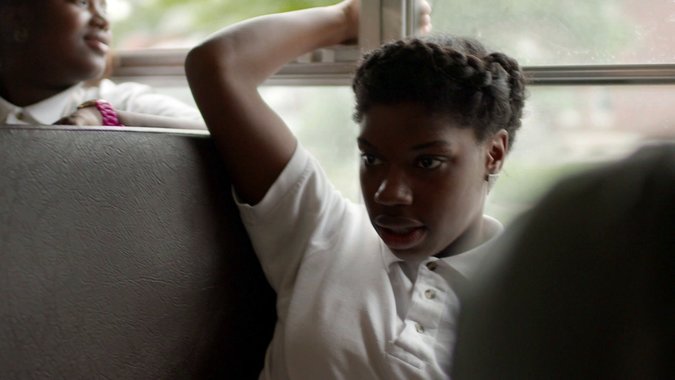 Contemporary observational documentaries are at once the most inexpensive and yet the most costly of cinematic art forms: low in production outlay, heavy in emotional and spiritual capital, both behind and in front of the camera, paid out in the witness of experience, the living of a life. Jeremy S. Levine and Landon Van Soest’s unadorned, urgent, troublingly intimate “For Akheem” covers two years in the life of Daje “Boonie” Shelton, a 17-year-old African-American girl in North St. Louis, a few miles from Ferguson, Missouri, which would erupt a year after the film begins.

The bright, lively Daje’s daily routine, navigating and negotiating obstacle after obstacle in her closing three years of high school, is further complicated after she’s pregnant with her son Akheem. Girlhood is fraught, especially in these circumstances, their dire days. Daje and her friends have seen much, the wounded and dead, “Too many to count.” Surroundings tell much of the story: explanations are foregone in favor of telling atmospheric, cinematic to a fault. Daje is seen watching the news coverage of the events in Ferguson, including the shooting of Michael Brown. Her face: Stoic? Still? Knowing? Resigned? Simply still. Her voiceover narration is stark poetry, and as haunting as anything we see unfold. 90m. (Ray Pride)