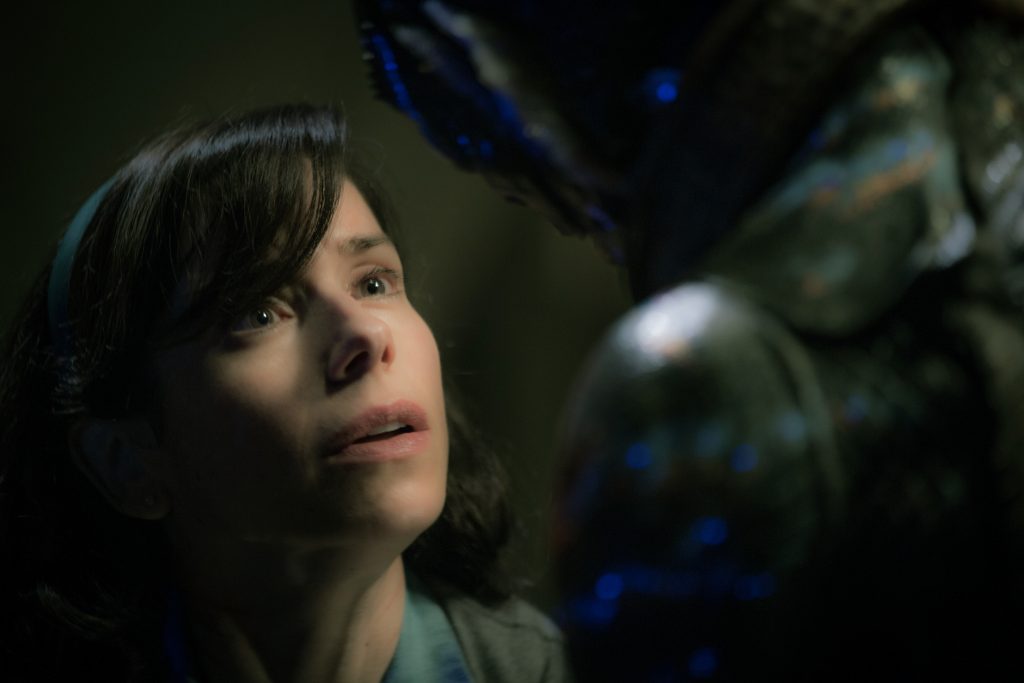 After an advance screening of “The Shape Of Water” before its Chicago International Film Festival premiere, the lights came up halfway through the credits, revealing a telling image: the studio’s piracy security guard casually wiping away tears, cheeks streaked like rain, this stocky Latino nearly smiling, but stoic still.

Guillermo del Toro’s mad and madcap fairytale, far from folly, conjures tears and daffy laughter and fearsome fret: it is an otherworld set down during the Cold War of fifty-five years ago, during the time of civil rights protests in the South, in Baltimore and at a secret government facility on that city’s outskirts. Allegory for the politics of the modern moment careen beneath nearly every complication, and yet del Toro keeps to the business of his lovingly designed sea of surfaces and his complicated, cockeyed espionage plot while threading a single, singular theme throughout: loneliness.

Faces of loneliness: look upon them. Sally Hawkins (Elisa), a cleaning woman made mute as a child, living above a moldering movie palace amid racks of disused 35mm movie reels, down a hallway littered with octagonal movie-reel canisters, dreaming at night of floating away, a princess in her dreams, cast into a dream of watery release, a dream of drown without the messy drowning. In her dream-life aquatic, chairs dance beneath the green, green sea, her world tumbles in nourishing amniotic fantasy, at least until the morning alarm sounds, once again. Richard Jenkins (Giles), her movie-mad and diva-loving gay neighbor, living amid the clutter of décor he daily sits at the drawing board, reducing his dreams to advertising illustrations for which the market is waning as photorealism advances in the ad biz.

Michael Shannon, a savage G-man who hates his work almost as much as he hates himself, who brings a much-coveted secret from the Amazon to the facility where Elisa works. Doug Jones: the secret creature, thought a god by the villagers from whose land he was torn, akin to the “Creature from the Black Lagoon,” but also the beauty and the beast from the myth, especially Jean Cocteau’s 1946 “Beauty and the Beast.” Octavia Spencer: Elisa’s loving, common-sense coworker whose husband is a blank wall of indolence and indifference. Michael Stuhlbarg: features fleet as mercury, a spy who is caught between two identities, misunderstood both as an American scientist and as a Soviet operative. The general who spits out “Unfuck this mess,” to Shannon in yet another facet of the allegory upon allegory of past and present, and an unknowable future yet to come. Lonely souls. Will, can, should, shall any of them make fruitful contact, let alone know love?

A museum exhibition is touring the world, first resident in Los Angeles at LACMA, “Guillermo del Toro: At Home with Monsters,” poured out a small portion of the contents of the couple of houses del Toro has stocked with his collections of art high and low. More of it finds its way into “The Shape of Water.” On Twitter between projects, the fifty-three-year-old Mexican polymath of myth will sometimes align his timeline with the sources that inform his imagination, familiar names and illustrations, but also images that contain mystery after mystery. Del Toro has consumed and compacted more art, more fable, than most of us will ever encounter.

Swaddled within the plush but playful movie-movie atmosphere, del Toro works his idiosyncratic alchemy, lavishing intricate lighting and production detail familiar, but seen too seldom nowadays outside of movies by the Coen brothers or way back in the century to Jean-Pierre Jeunet’s “Amélie” (2001). “Shape” benefits mightily from a modulated beauty of a score by the oft-overwrought Alexandre Desplat, production design by Paul Denham Austerberry (“30 Days of Night,” “Assault On Precinct 13,” 2005) and cinematography by Dan Laustsen (“John Wick: Chapter 2,” “Crimson Peak”). He finds room across his sprawling yet intimate canvas for winks to prior masters and their work, too, as in a quick glance at a neon sign above a storefront near the movie palace named “Laughton,” which indicates a key visual influence, Charles Laughton’s only feature as director, the memorably wicked and watery “Night of the Hunter” (1955).

Del Toro doesn’t hold back on the low, either: “The Shape of Water” is unstinting in its voluptuous delight but also its earthy glories. Del Toro’s character strokes are cheerily bawdy, as in the advice melancholy Giles would have offered his younger self: “Take better care of your teeth and fuck more.”

Near the end, “Shape” threatens to fall apart, as plot elements cascade to what seems like a disappointing end, but the rebound is majestic, its climactic passage thrilling in its onrushing imagery, transcendent in its final, triumphant gesture. Tears are shameless.