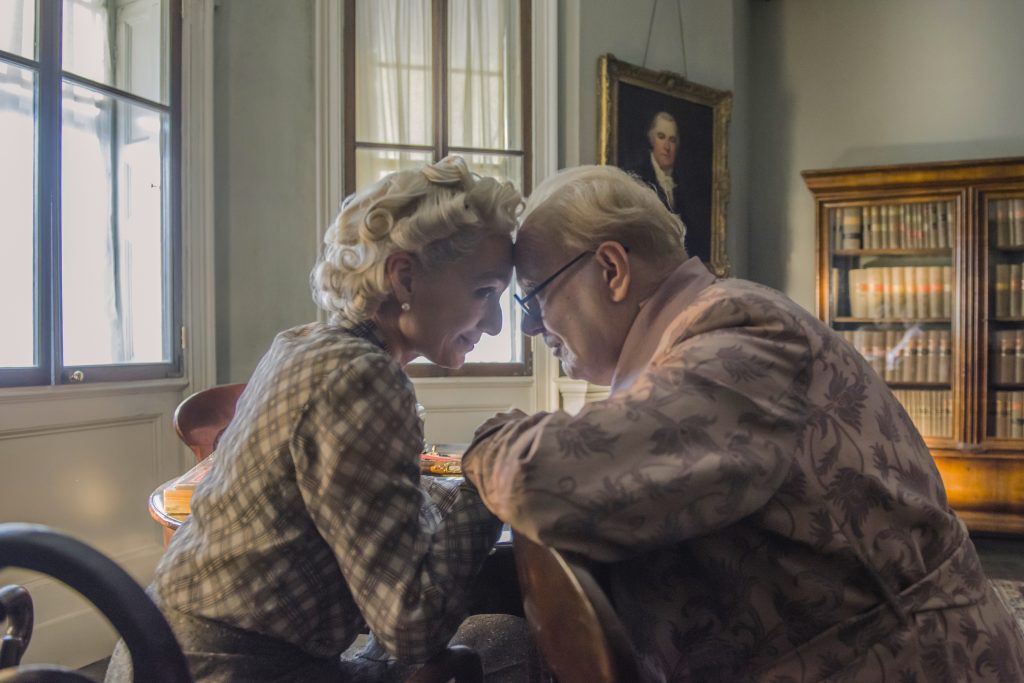 Nimble Brit director Joe Wright arrives again; it seems like he’s always arriving every couple of years, every other film announcing himself as a bold maker of thumping entertainments, who alternates precise, startling work with fancies that fail. But when his work obtains—“Pride & Prejudice,” “Hanna,” “Atonement,” and now, “Darkest Hour”—the results outshine the pyre of his pictures that sputter (“The Soloist,” “Anna Karenina,” “Pan”). In “Darkest Hour,” Wright essays a fresh take on the legend and legacy of Winston Churchill, capturing the career politician’s fraught wartime ascension and succeeding obstinacy in the face of assault by cabinet treachery and Nazi advances. But all that is armature for sleek performances, including a portrayal of the man as funny, charming, driven, and even flirtatious. Gary Oldman says he took a year to immerse himself in as much of the copious Churchilliana and the witty, verbal screenplay by Anthony McCarten (“The Theory Of Everything,” 2014). The lashings of laugh-out-loud epigrams suggest keen study of the corpus of biography and autobiography and an awareness of the wordsmithing of writers like Tom Stoppard (who wrote the screenplay for Wright’s “Anna Karenina”). Wright’s second Second World War movie pushes ahead with implacable pace, but not haste, toward Dunkirk, which he had depicted in “Atonement” as an extended single take of dizzying panoply traversing space populated by thousands of men on the beach and beyond at Dunkirk. Even as the planning for Dunkirk dovetails pleasingly with memories of Christopher Nolan’s figuring of war in his “Dunkirk,” Wright stays closer to ground, to the man, to the struggles of will between those who believe that scented isle would be just as well off under the hand of fascists like Oswald Mosley or Adolf Hitler than a prime minister approved of by the King. There are occasional bracing bursts of Wright’s recurring visual fancies, including angel’s-eye overhead views of battlefield topography, images refracted through glass and screen-filling close-ups of keys impressing letters onto paper. Wright used this in a pivotal image in “Atonement,” as well as in the variety of images he provided early in his career for stadium projections for bands like Chemical Brothers and Underworld. (“’I was definitely off my head on ecstasy for quite a few years. I was up a scaffold, sixty feet above this seething mass of people, matching visuals to music from these amazing DJs,” he told the Guardian in 2008.) And Gary Oldman? Gary Oldman is Winston Churchill. He’s the man. And when Wright finds the sly moment to add light from the side via a window or in an unexpected shaft in a subterranean war room, Oldman twinkles. His Churchill twinkles. His performance is unabashed delight: both his sly command and the sheer joy he conveys, as both the unlikely statesman in his sixty-fifth year and as Gary Oldman, master actor. With Kristin Scott Thomas as Churchill’s slyly witty, ever-loving wife Clementine, Ronald Pickup as a peaked, wounded Neville Chamberlain, Lily James as Churchill’s attentive stenographer and the mesmeric Ben Mendelsohn, slyly understated, keenly watchful as King George VI. 125m. (Ray Pride)