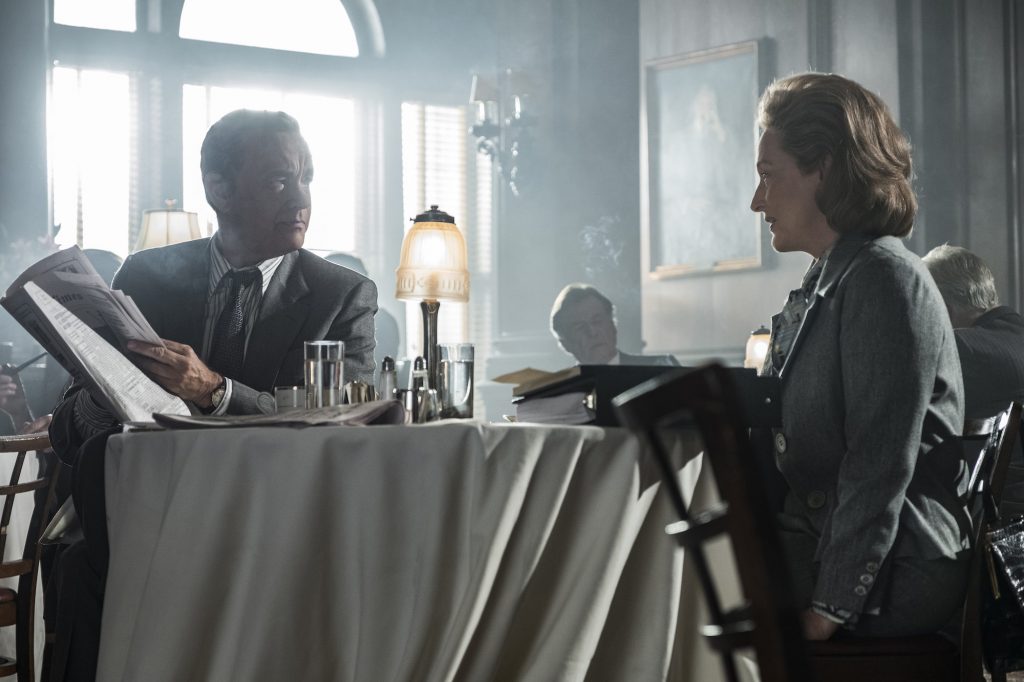 “It’s Terrific!” boasts the most familiar advertising slogan for the 1941 release of Orson Welles’ “Citizen Kane,” a movie that also holds the line, “I think it would be fun to run a newspaper.” Both came to mind watching “The Post,” both historical fiction and a breakneck shot-at-speed allegory for the present moment of journalism and politics, begun and released in less than nine months. Steven Spielberg’s direction is low-key but urgent, with many strands of visual patterning, including the echo of the geometry of a Vietnam firefight in the opening scene in eccentric camera positions for a moral showdown between Washington Post publisher Katharine Graham (Meryl Streep) and editor Ben Bradlee (Tom Hanks) when a decision to publish must be made. “The Post” is not “Citizen Kane,” nor is it “All the President’s Men,” but its story of the rivalry between papers, the New York Times and The Washington Post, to be the first to publish the legally enjoined “Pentagon Papers” leaked by analyst Dan Ellsberg, is indeed terrific, as is Graham’s discovery of what fun it is to run a newspaper. The screenplay from first-timer Liz Hannah (and Josh Singer) dovetails a 1970s ticking clock against inquisitive press pitted against an overreaching executive branch with present-day concerns, and the interplay of dozens of actors is accelerated by the banter and grown-up turns akin to the best of the late Nora Ephron. (The details of a 1970s newsroom and pressroom are elemental tactile poetry to anyone who trained in a previous era of journalism, including me. Shivers and swoons ensued.) The script may err on underestimating Graham’s prowess in its subplot of a critical stock offering, but the satisfactions of Streep’s performance, rich with moments of revelation, affirms the choice. There’s a lovely moment of Graham exiting the Supreme Court after its ruling, stepping down to a sea of upturned female faces that is romantically affirmative, looking to a still-possible future. The film also has an ending that thematically looks forward to another Washington Post investigation, with final images that have a dark, bittersweet visual flavor of the collaborations of Alan J. Pakula and cinematographer Gordon Willis. The spiky, semi-starry cast includes a super Bob Odenkirk, Bruce Greenwood, Michael Stuhlbarg, Sarah Paulson, Tracy Letts, Bradley Whitford, Alison Brie, Jessie Mueller, Jesse Plemons, David Cross and Carrie Coon. 130m. (Ray Pride)

“The Post” opens Friday, January 5 and goes wide on January 12.