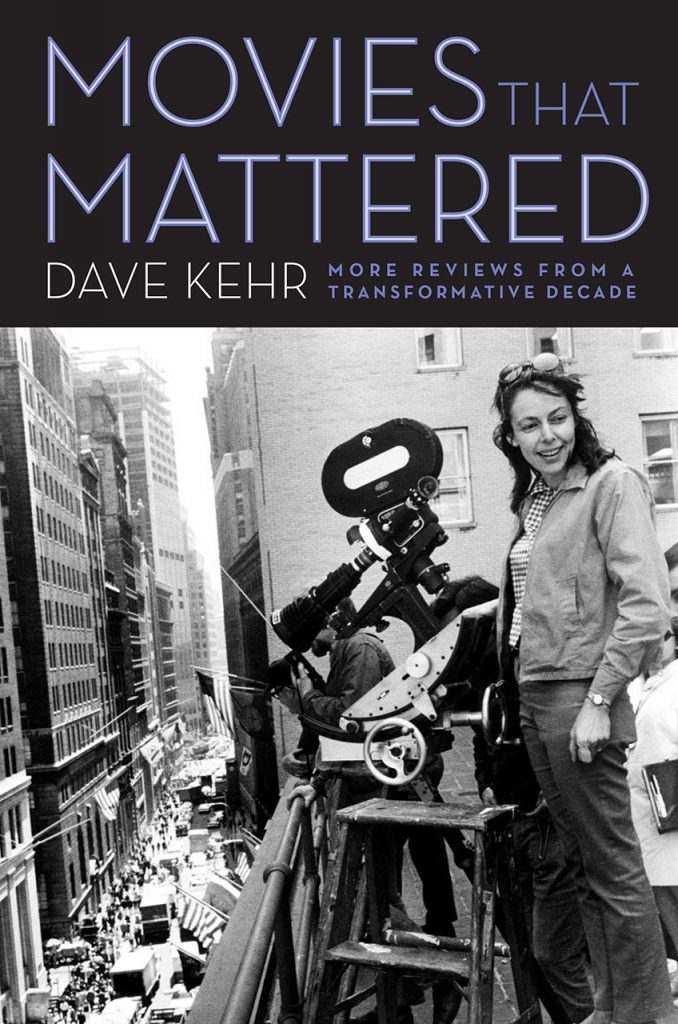 Face down in the street, newsprint muddles, letterforms muddied, words blurred into something only slightly more than nothing.

Seeing pages from two-day-old issues of Newcity melting away back in the 1990s, my byline part of the street filth, that image became essential to thinking of transient journalism; words, written, edited, published, stripped and striped into the urban landscape: Roger Ebert writing for the Sun-Times or Dave Kehr, and later, Jonathan Rosenbaum in the Reader, their bylines would sometimes streak past in a sudden gust or get mashed flatter by passing traffic.

Dave Kehr, who began his critical career in the 1970s, wrote extended, considered pieces, often of a few thousand words, about how movies move, how essential elements of directorial and design craft conveyed not only an author’s voice in the classical American studio system, but also a reflection of a larger culture, and even the world at large. (In a 2011 interview in the Village Voice, Kehr described the questions he asked himself of a film on view: “How is this movie working? What’s this guy trying to do? What are the animating tensions behind this thing? Is it asking a question or answering it?”)

Those pieces came and came again from 1975 and into the eighties, taken for granted weekly as part of Chicago’s vital sea of cinephilia. Taken for granted so much so that while Kehr’s shorter capsules are part of the Reader online database, the long pieces sat in piles of newsprint, kept from light of day and readers’ eyes. Of the freedom he knew as a writer in those days, Kehr says, “The theory was that readers would pick up the free papers anyway—if only for the music listings and the classified ads—so it didn’t much matter if the cover story was a 50,000-word piece on beekeeping or if the movie critic took a dim view of the latest Hollywood blockbuster.”

That storehouse of phantom essays was tapped for 2011’s “When Movies Mattered,” and now in “Movies That Mattered,” Kehr’s second assemblage of pieces from the Chicago Reader between 1974 and 1986 (and latterly in Chicago magazine). Clarity is the abiding virtue. On the handsomely designed page, there is no smudge or blur. What had been neglected occasional pieces now stand to be savored. Those pages lost to wind and rain are now tucked inside a tidy 200-page paperback that grows weighty as a physical object, much as physical media reassures many longtime movie followers. Streaming content, unstable digital archives, are not tactile and lack context in the physical world.

The first volume rang with praise for better, lasting work rather than the cool disavowals of which Kehr was capable. He writes vivid appreciations of Paul Schrader’s “Blue Collar,” Robert Aldrich’s “Twilight’s Last Gleaming” and Stanley Donen’s “Movie Movie,” as well as films by personal favorites like Robert Zemeckis (“Used Cars”) and Clint Eastwood (“Pale Rider”) as well as the left-field amour that he demonstrated time and again for movies like Peter Bogdanovich’s “Saint Jack” or Martha Coolidge’s “Valley Girl.” (“The tone is pitched in the seldom-explored realm between satire and romance; Coolidge’s control of that tone is remarkably accurate, and her medium of control is the acting.”)

There is a section of greatest hates this time around, called “Autopsies/Minority Reports,” in which individual films allow him to sound his disdain for their filmmakers’ larger enterprise. On Robert Altman, reviewing “A Wedding”: “It would be much simpler for everyone concerned (myself particularly) if ‘A Wedding’ could be quietly written off as a complete disaster… [Altman’s] ambiguity is only skin-deep; beneath the rhetorical tricks lies a set of rules—rules that are hard, narrow and oppressive rules that guide our impressions to a single, and singularly bleak, conclusion.”

Francis Coppola: “’Apocalypse Now’ suggests that Coppola’s great talent may lie in hiring talented people: he’s a better producer than director… But no amount of craft can disguise the film’s essential inertness, its lack of moral tension and risk, its substitution of scale and spectacle for solid thought and feeling.”

And Kehr’s bête noire, Stanley Kubrick, on the occasion of “The Shining”: “God is a big, black slab from outer space, and the devil is a bartender named Lloyd… Kubrick loves his set more than he loves his characters; above all, he loves the tracking shots he can lay through it… ’The Shining’ is plainly a bad film; on a deeper level, it may also be an objectionable film—cold, hermetic, misanthropic. But it is to Kubrick’s credit that he continues to use film as a medium of personal expression, no matter how repellent that personality may be… It’s a movie to be reckoned with, argued with, confronted; it sticks in the mind in uncomfortable ways.”

Here’s a grand example of keen and clear description that’s haunted me since it appeared in the pages of Chicago, Kehr at his best, the conclusion of his review of Robert Bresson’s “L’argent,” describing its ending. “Immediately after the murders, Yvon confesses to two policemen standing at the bar of a country inn. As they lead him to the door, a crowd gathers to watch. Bresson holds the shot—his final one—for a few seconds after Yvon and the policemen have passed; the crowd remains frozen in place outside the inn, staring, at apparently nothing at all. And then we realize what has transfixed them: the door is still open, letting a warm light out into the night. No one moves to close it.”

Kehr is now a curator in the Department of Film of the Museum of Modern Art. As he writes in his afterword, “In critical jargon, this is what is technically known as a ‘happy ending.’”