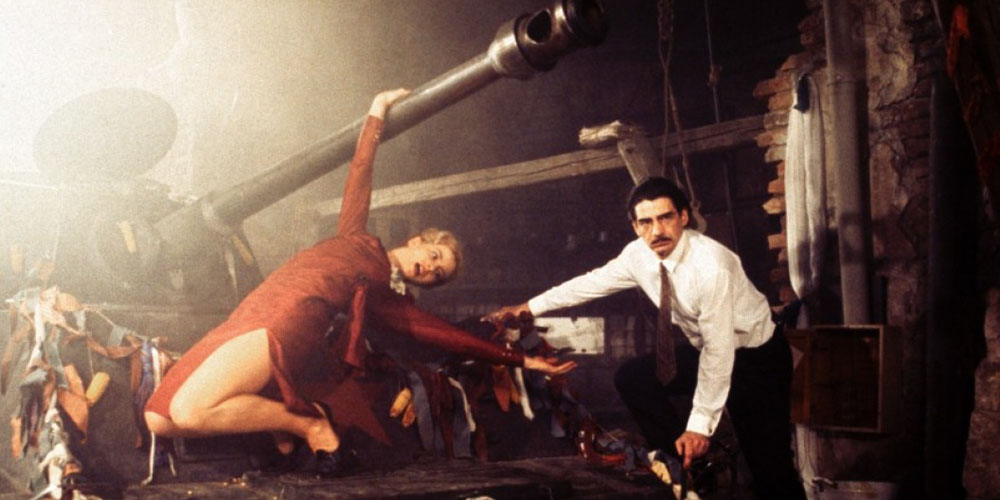 Long out of circulation since its 1997 U.S. release, Emir Kusturica’s bold, epic farce of the horrors of war through fifty years past the end of World War II in former Yugoslavia is, among adjectives littering its original notices, brilliant. While politics are purposefully muddied—Kusturica is now a staunch Serbian nationalist and personal friend of Vladimir Putin—every scene in this layered, lurching canvas is bursting with music, jokes, outrageous behavior, drinking, sex, drinking and elemental tragedy. The newly digitally restored “Underground” (Podzemlje: Bila jednom jedna zemlja), winner of 1995’s Cannes Palme d’Or, is furiously inventive, overlong, overwrought, battering, mesmerizing, magical. From an outsider’s perspective, the massive project of Kusturica’s convulsive carnivalesque celebrates the vivacity of the survivor. (His countrymen may know better.) “Underground” begins with a Felliniesque rendering of the 1941 Luftwaffe bombing of Belgrade, including the extraordinary vision of the results of the bombing of the city zoo. We meet Marko and Blacky, two charismatic gangster-patriots. Blacky (Lazar Ristovski) is the force-of-nature national-hero type, unable to stop eating even as bombs burst over his head. Marko (the charismatically expressive Miki Manojlovic, in one of the most physical comic performances of the end of the past century) is the bureaucrat in paradise as the duo run guns, steal gold, get rich and long for the same woman, Natalija (Mirjana Jokovic). Marko designs an underground city for everyone to hide in; once the war is over, he lies to his compatriots, claiming the fighting still rages outside, while becoming one of Tito’s righthand men and keeping Natalija to himself. The toppling, teeming score is by Goran Bregovic. 170m. (Ray Pride)

“Underground” plays at Siskel February 3, 5 and 7.