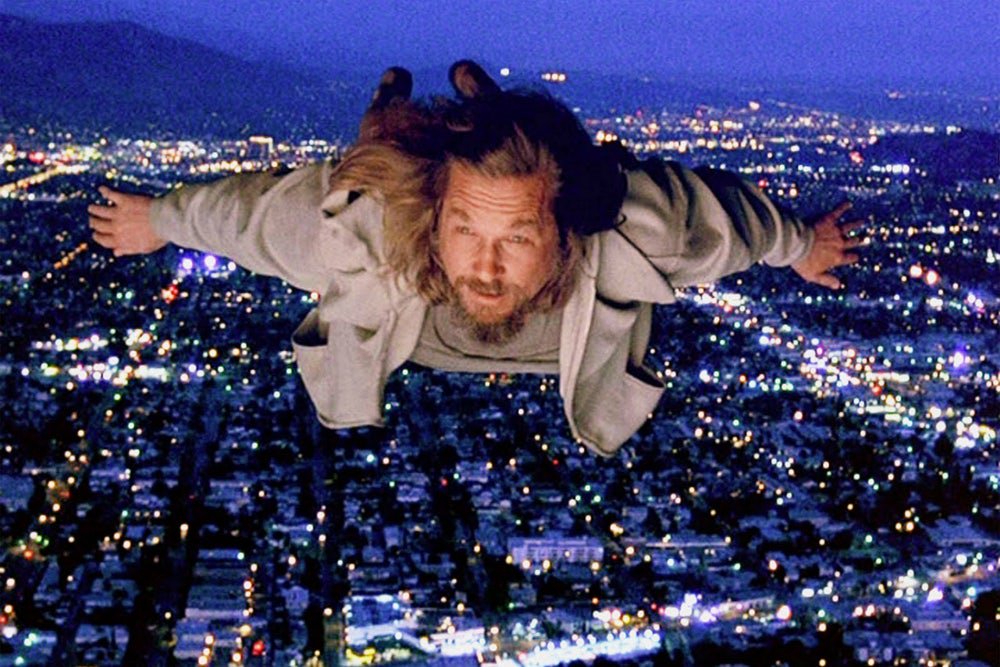 I caught a glimpse of the Coen brothers at a distributors’ party at Sundance this year. (There had been a tribute to Joel’s wife, Frances McDormand.) Joel had clamped on probably the best don’t-fuck-with-me scowl I’d ever seen as he piled through the room. Talking to the two of them a few weeks later, their disingenuous finish-each-others’-sentences, joined-at-the-quip, self-amused chuckle-monkey behavior is kind of amusing, even when you play back the tape and find out just how little they’ve actually said.

“The Big Lebowski,” set during the Gulf War, is a return to form for all of those who admire the Coens at their most sarcastic, where large men scream very loudly and jokes are pounded into the ground with vigor and brio. Jeff Bridges plays The Dude, aka Jeff Lebowski, a Los Angeles pot-stoking and White Russian-swilling seventies-style layabout mistaken for a millionaire of the same name. He’d rather be bowling with his buddies Donny (Steve Buscemi, never allowed to finish a sentence) and Walter (John Goodman, increasingly, indelibly insane as the story progresses). They’re characters whose behavior never shifts, as nuts as cartoon characters come to life. Goodman’s Walter is a bullet-headed, barely contained titan of rage, running on the fumes of cracked beliefs and fierce garble-gabble. The resemblance to Raymond Chandler’s convoluted plots and view of L.A. melts away under the barrage of splenetic rage that the pig-ignorant characters unleash on one another. (The bowling-fantasy musical number is another matter altogether.)

“The Chandler stuff is accurate,” says tall, dour Joel. “Even specifically accurate in terms of some of the details of the movie. But it’s much more of the case that we were thinking about Raymond Chandler in general. We wanted to do a Chandler kind of story, both in terms of how it moves, episodically, and dealing with the characters trying to unravel a mystery. But also in terms of the movie being about Los Angeles the way Chandler’s are about L.A. I haven’t read any recently, but we both read a lot of Chandler when we were kids.”

It would seem that part of the attraction would also be the convolution and the inscrutability of the storytelling in both Chandler and the film, “The Big Sleep.” “Yeah, exactly,” Joel says. “‘The Big Sleep’ was a hopelessly complicated plot, right. At bottom, the plots in Chandler are very unimportant. Very complex but very unimportant.”

Joel cuts in: “It’s more of a case of him being a sponge for, y’know, the culture that he inhabits in general, the things that he’s heard, that he regurgitates from previous scenes. That’s filtered all through his sort of reefer haze.” Ethan grins. “That’s the fun of putting him at the center of the movie.”

So is The Dude an archetypal Angeleno for the brothers? They swap looks. “The Dude is based on several people, including a member of an amateur softball league,” Joel says, “but we changed it to bowling because bowling seemed so much more visually compelling and it’s the kind of sport you can do while you’re drinking and smoking. It’s also very retro. The characters are all the product of an earlier time, and bowling in terms of design, particularly in L.A., and specifically an earlier L.A.”

Both “Fargo” and “The Big Lebowski” are set a few years back, almost-period pieces. “In the case of this one,” Ethan says, “setting it at the time of the Gulf War is an opportunity to have Walter gas about something.” Joel says, “That’s it, that’s really the reason.” But Ethan continues. “Also… well, in the case of both movies, ‘Fargo’ is also set not present day, but almost present day, right, it’s somehow almost more attractive to make them time-specific somehow than just make it present day…”

“What is the present day?” Joel asks. Ethan says, “Yeah. It’s completely unspecific.” Speaking of the recent past, I wondered if the Oscar has been a help or a nuisance. Ethan says, “Well, who knows? You know real specifically how it figured as a nuisance but you don’t know specifically what it gained you, since you don’t know how easy it would be to raise money for the next movie absent that, so…” The grin again. “Nuisance! We’re sure it was a nuisance, the gain we’re not so sure about.” Joel adds, “Yeah, y’know, I guess it’s hard to tell.” The tape degenerates into a volley of blurts and counter-blurts and a couple of giggles. Joel’s voice rises from the din, “We were in the middle of this movie when all this stuff happened. It’s a little bit distracting because everybody’s breathing heavily about it while it’s happening and it’s strange when you’re in the middle of making another movie and going to work every day. Beyond that?” They shrug.