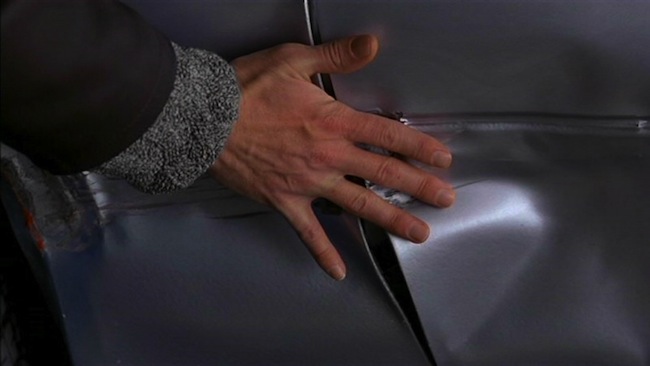 David Cronenberg’s “Crash,” winner of a jury prize for “audacity” at last year’s Cannes Film Festival, is a fine translation of the singular character of J. G. Ballard’s 1973 novel. In burnished, ornate, painfully specific prose, Ballard suggests a linkage between sexuality and the modern machine, between the unspeakable thrill of danger in our imaginative lives and the deadly potential of the automobile and its propulsive motion. James Ballard (James Spader) is a film producer whose dispassionate liaisons with his wife, Catherine (Deborah Kara Unger), a sculpture-boned beauty, are heightened through exchanging stories of their mutual, promiscuous adventures outside their marriage. After an accident in which the other driver is killed, Ballard meets the surviving passenger, Dr. Helen Remington (Holly Hunter), along with Vaughan (Elias Koteas), a sexually polymorphous crash fanatic who has become obsessed with the meeting of flesh and technology in what he believes can be “benevolent psychopathology.” Wreckage, physical scarring, sexual encounters heightened by the proximity to danger—these are all esteemed. Yet Cronenberg has managed to make a stunningly beautiful film, one of perversely satisfying passion. Equal parts astonishing and horrifying, “Crash” is concise, keenly imaginative and darkly satisfying.

The events of the story begin thrillingly cold, with dialogue delivered in a hush of exaltation, mimicking the just-plain-wrong whispers of the dreamer’s brain. While shooting in contemporary Toronto, Cronenberg has made a bit of timeless futurism of his hometown, the wet, wintry landscape sere and depopulated, a landscape emptied of all but forward motion.

Cronenberg’s uncompromised intelligence is preserved in its current, uncut NC-17 form, despite the interference of Ted Turner, the Time Warner vice chairman and former owner of distributor Fine Line Features, who believes “Crash” may persuade teenagers to have sex while crashing their cars. In fact, Cronenberg’s movie is an exquisitely calibrated metaphor for how fetish and obsessive behavior exclude the outside world and occlude perception of the rest of the world. “Are there more cars out there now?” the crash victims ask one another. The world is divided into those who have crashed and those who have not.

“The sex at the beginning is pretty dispassionate but it starts to fill with meaning,” Cronenberg says, “which is really what they’re looking for. They’ve already got sex, and they’ve even got kinky sex, so it’s not that that’s absent. It’s meaning. Even though people think the movie is cold, I don’t think it’s cold. It begins cold but it gradually fills with emotion. It is subtle and it’s not delivered the normal way it’s delivered in movies.”

Besides an unusual narrative structure—for instance, opening with three sex scenes in a row that serve as characterization and plot—the characters are not normal audience identification figures. “With obsessives, those who are not obsessed are of no consequence,” he says. “They’re at best a minor irritation. The only reason Catherine counts, even though she’s not had a crash, is that there is a desire there for them to reconnect and Ballard feels he’s found the key. But until she’s had her crash, she can’t be part of the structure of the group or of him. She must find her crash.”

Without her initiation, their shared experience is meaningless. She remains outside his fantasy life. “It’s absolutely faces in the crowd. People who you can’t quite see behind the wheel of cars are not the people you are concerned with. There is a small circle of people who understand, the crash epiphany allows them to relate to each other. Everyone else is irrelevant. That’s what the movie does as well. The rest of the world is just little shadows in the corners of the frame.”

Sensation fills most of the frames. The mood and choice of details in “Crash” is as heightened as foreplay—touch, tactile—not only sex, but the way characters strain toward each other. “The whole movie is foreplay leading to the final scene,” Cronenberg says. “Even Vaughan tracking Catherine with his car and touching her, nudging her car with his car is, in the context of the movie, even more intimate, really, than physically touching her. It’s a real violation of the marriage.”

Cronenberg’s unnerving film has met criticism, including the plaint that a series of sex scenes is not a plot.

He laughs. “First of all, how limited one must be to make rules like that. And how educated we have been into the Hollywood understanding of what narrative is and how it should be delivered. My answer was, ‘Why not? Why can’t it be?’ A journalist said that the scariest thing about the movie was the lack of a moral stance. That was, I felt, also very indicative of what one expects from a Hollywood movie, but not necessarily what one expects from art. It was like a plot device that was demanded had been excluded and he was outraged! `Well, I’m glad you noticed,’ I said, but it’s really the subject of the film. There is no moral stance that you can take. That is the subject of the film. And if I impose my own artificial standards, then I’m completely spoiling my experiment, which is to let these creatures have their head and try to reinvent all of these things they’re trying to reinvent. And I think that’s the situation we really all are in as humans. That’s the existential contract that we signed on birth, which we later look at and say, ‘I can’t believe I signed that!’ That’s all these people are doing. They say, ‘OK, reality, meaning, morality, all of these things are our responsibility to invent and to force ourselves to believe in.’ And if we don’t? They aren’t there.”