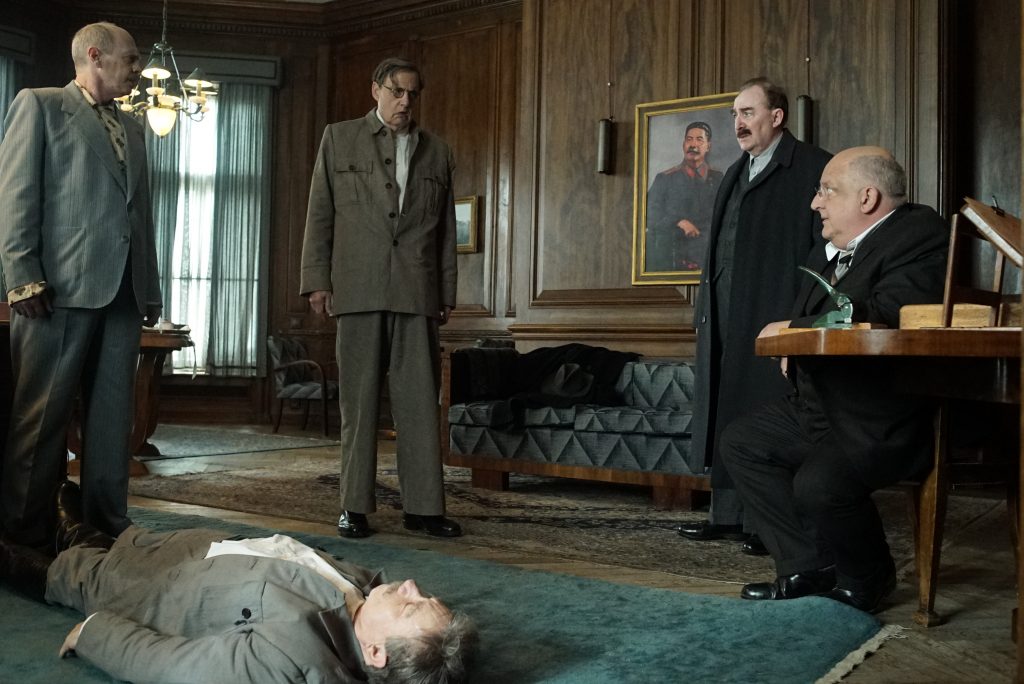 Morbid, mordant, bleak and black-heartedly wonderful, Armando Iannucci’s “The Death of Stalin,” a flat-out comedy about dictatorship adapted by Iannucci, Ian Martin and David Schneider from a pair of graphic novels by Fabien Nury and Thierry Robin, lands in the middle of a world gone mad, shaped from fear, chaos, cronyism, toadyism and limitless corruption. It’s not the present day. The 1950s Soviet Union is the site, and is truly troubling in how much pulse of contemporary relevance Iannucci effortlessly evokes then drags into the drawing room. As dictator Joseph Stalin’s influence and pulse fades after a stroke, the men around him have only hours to implement their personal agendas, and atop all of the agendas is how to backstab sufficiently to survive, however momentarily. Each member of the cast essentially sticks to their own accent, as well as their own characteristic acting styles, and the result makes the timeless travesties all the more transparent, timeless, alarming, disarming and hilarious nearly beyond belief.

“If we’ve done this right,“ Schneider has said, “you should feel that these are interesting guys who might be fun to hang around with. Then you remember they are mass murderers and that’s the challenge—they are obviously nasty pieces of work, but at the same time there’s something engaging about even the worst of them.” (The remarkable roster of actors includes Steve Buscemi, Paddy Considine, Jason Isaacs, Simon Russell Beale, Michael Palin, Jeffrey Tambor, Olga Kurylenko, Andrea Riseborough and Rupert Friend.) The comedy is built on timeless human coarseness and corruption, not documentation of the fallen Soviet empire. (Russia has banned “The Death of Stalin.”) “In the Loop” is great, “Veep” is swell, but “Death of Stalin,” in all its comic craft and slapstick dudgeon, may be the first magnificent movie that’s landed in the Trump era to fully engage and choke on our daily dosage of meretricious madness, societal degradation and moral mayhem with far more lucidity than a fearful leader’s every breath measured in 280-character bursts. (First as farce, then tragedy.) 107m. (Ray Pride)