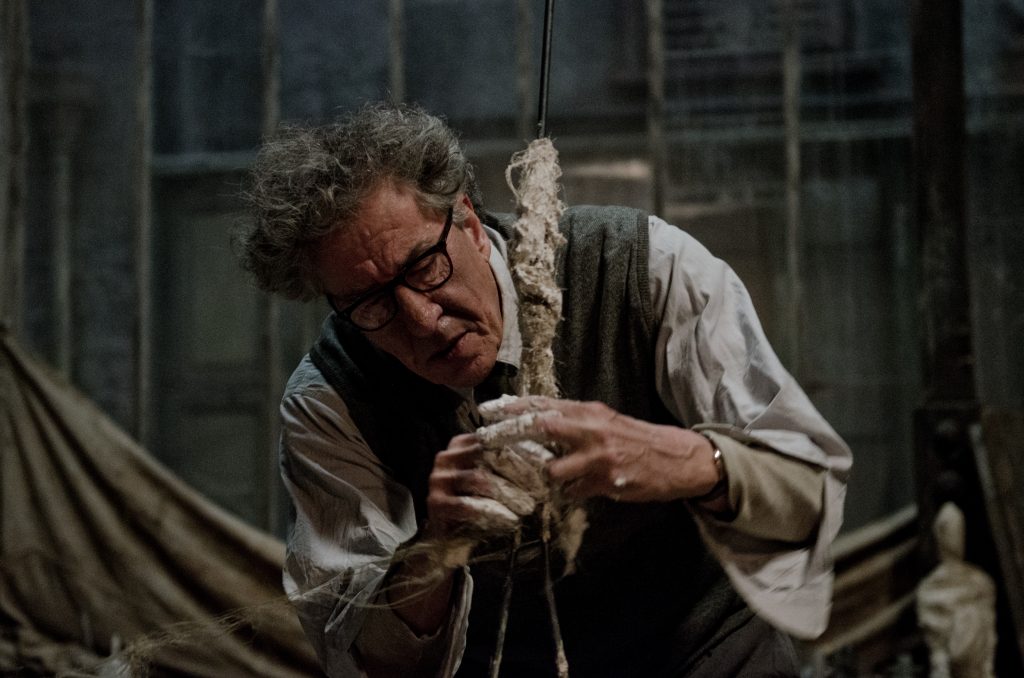 Stanley Tucci does a little thing, a grand little thing in “Final Portrait,” a study of sittings for the artist Giacometti (Geoffrey Rush, hair furious, features feverish) by a fortyish writer and art lover, James Lord (Armie Hammer). Tucci transforms an artist’s world into a flurry of process, not limited to the hands-on work. In the movies that Tucci has managed to get made as a writer-director, each finds process central—cooking in “The Big Night,” fantasy to forestall another process, writing, in “Joe Gould’s Secret”—and layers magically suggest themselves as we watch a man at work, at a repeated task: perfected scallops, eggs, asparagus; graphomania wrenched from a troubled brain; the sculptor’s signature, his fingers upon clay. It’s a sweet signature, as transfixing as the features of his fellow actors. Very much a miniature, a modest chamber work, contained but hardly tidy, “Final Portrait” (adapted from James Lord’s memoir “A Giacometti Portrait”) opens with a magnificent tableau that Tucci will knot and unknot in the ninety minutes to come: Giacometti awaits his sitter on a bench in a museum, his own signature on a wall behind him a bolt across the widescreen frame. Geoffrey Rush’s stilled pose is the form of sculpture itself: troubled, perhaps tortured, frozen, expressive, ready to burst into motion as a sculpture never can, but can only suggest, as in so much of Giacometti’s work. But, of course, Rush bursts forth: a restless nimbus of hair and smoke and numinous fret and modest terror. There is exhilaration as well in the deft strokes Tucci uses to suggest the contours of the sixty-four-year-old artist’s quotidian life in 1964 Paris. Inner life and outer life merge, and some art is finished; other art may never be concluded. With Tony Shalhoub, Sylvie Testud, Clemence Poesy. 90m. (Ray Pride)