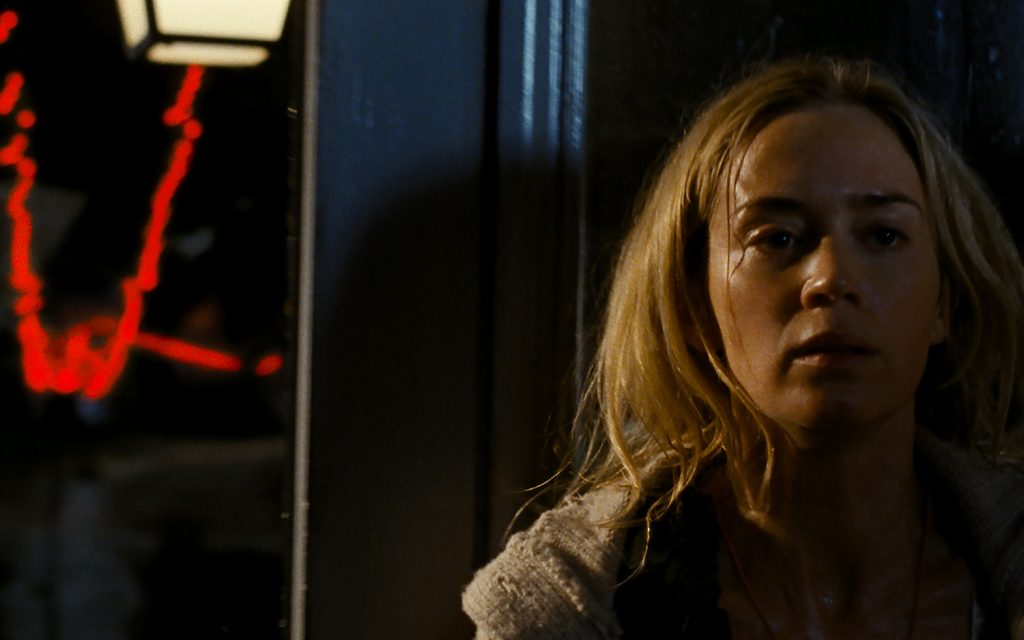 The all-in-two-days horror “A Quiet Place” is rated PG-13, courtesy of reticence about blood and gore and profanity in its nearly wordless length, but the more telling rating would be two words from the BBFC, the British censors, which places a card with warnings before theatrical features: “Prolonged Threat.”

The world ended. Monsters came. Monsters with no name, no history, but with super-sensitive ears. Modern society got et. In the woods of the upstate New York Hudson River Valley, near the town of Little Falls, population 845, we accompany a family with no words: a father, a mother, two sons, a daughter who is deaf. The family has survived by the fortune of having mastered sign language long before the shrieking terrors of the night splattered humanity (and nosy raccoons along the way.) [Spoilers.] 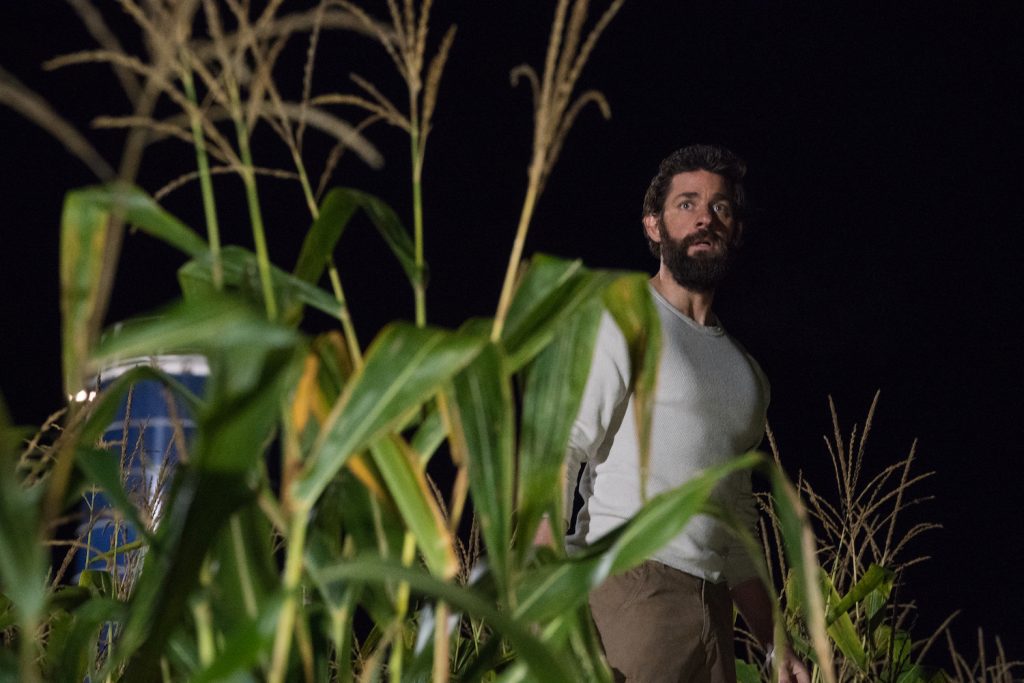 They’re not hippies, but they’re living off what’s left of the land, moving quietly on filthy bare feet, a mother (Emily Blunt) and deaf pre-teen daughter (Millicent Simmonds, herself deaf) and two smaller sons, as they search for medication in a looted storefront market, as barren and bereft as the produce section a half-hour before closing at my local Mariano’s. Newspapers from months back sign worldwide catastrophe. Messages about the lost are tacked to walls. Inside, signals and then sign language are exchanged: we’re moments away from seeing the menace at hand scissor its way into consciousness and abruptly take a life.

John Krasinski directs from a script by newcomers Bryan Woods and Scott Beck, with a writing credit to himself as well. Approached to act by co-producer Michael Bay after Krasinski appeared in Bay’s Benghazi adventure, “13 Hours” (2016), the actor fruitfully pushed to direct as well, and cast his wife as the longest suffering of modern muted mothers. Blunt speaks the longest burst of words in “A Quiet Place,” and would count as thesis even if the words weren’t so derangedly specific as thesis: “Who are we if we can’t protect them? Who are we!” A line that speaks to the movie’s runaway opening weekend: there’s Shyamalan-type rattletrap in story shortcuts, but more deeply felt, more deeply heard, is shock-sharpened awareness beyond grief and guilt. The cumulative impression is not a story of child endangerment, but family endangerment, and family trust, and in the end, family preservation. “I just admired this mother so much,” Blunt told Mark Olsen of the Los Angeles Times. “That defiance to inject warmth and happiness into her kids’ lives despite the horrific environment was pretty fierce. Hey, she gives birth silently… So this is my superhero, basically.”

The unexpected last shot, a figure wheeling a long gun, forehead bedizened with sweat, eyes large, larger, directly into camera, directly at us, is a whoosh of a thrill to end on, effective still even after all its quotations and citations since “The Great Train Robbery” in 1903. We’ll soon see these mothers again. 89m. (Ray Pride)

“A Quiet Place” is now playing.