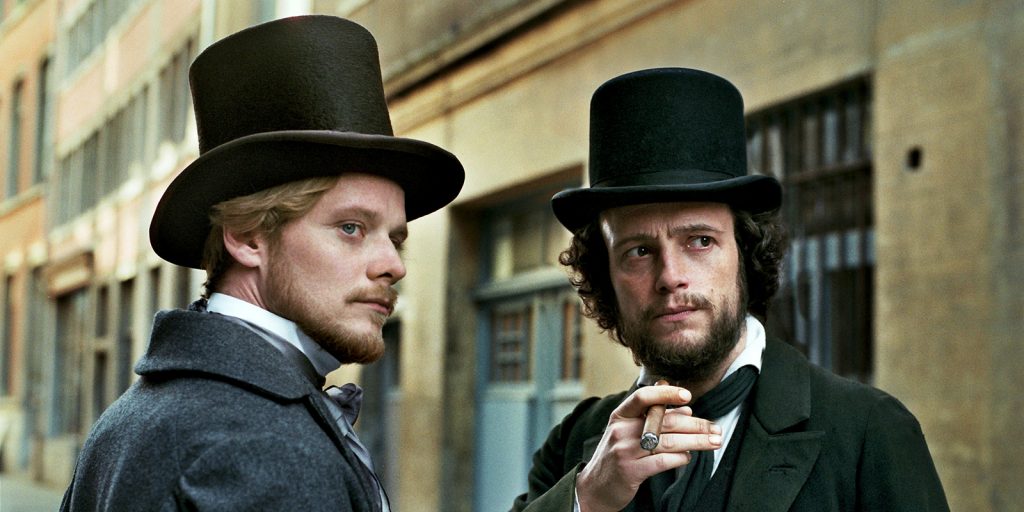 (Le jeune Karl Marx) What was on veteran filmmaker Raoul Peck’s mind after the widespread acclaim and embrace of “I Am Not Your Negro,” his biodoc of James Baldwin? (Its U.S. gross of $7.1 million is rarefied air for the U.S. theatrical release of a documentary.) Why, the same thing that had been on his mind for years: a brisk, bristling biopic of the experiences and ideas at play that formed the work of Karl Marx in his youth. “Before they’d even reached the age of thirty, Karl Marx and Friedrich Engels had undoubtedly started to change the world—for better or worse,” Peck says. Twenty-six-year-old Marx (August Diehl) makes his way with his wife (Vicky Krieps) to 1844 Paris, where he meets twenty-two-year-old Friedrich Engels (Stefan Konarske), and the drive to compose “The Communist Manifesto” is on. Peck’s focus is on how the ideas bruited are immediately applicable to real life and not mere airy abstraction. Diehl and Konarske are game, their performances rippling with the physical thrill of sharing the pursuit of knowledge amid an atmosphere of censorship, police raids and concerted opposition. Peck’s stated goals suit his finished film: “Should I make an American-style biopic with a somewhat surly but somewhat kindly tired-looking Marx speaking in English through his bushy beard in a vague political context while shedding a few tears at the successive deaths of his children, and cheating on his wife?” Peck writes. “Assuredly not.” Peck also avoids the temptation to allude to future events rather than rely simply upon the philosophical hopes of the actual historical moment. “Some of those guys saying they were Communists in Russia had nothing to do with Communism—or at least, had nothing to do with Marx and who Marx, Engels and Marx’s wife Jenny actually were.” The snappy, snappish, only sometimes-overwhelmed screenplay, built upon the substantial correspondence between the onscreen figures, is by Peck and Pascal Bonitzer (Chantal Akerman’s “Golden Eighties,” André Téchiné’s “Scene of the Crime,” Jacques Rivette’s “La Belle noiseuse,” “Lumumba”). With Olivier Gourmet. 118m. Widescreen. (Ray Pride)