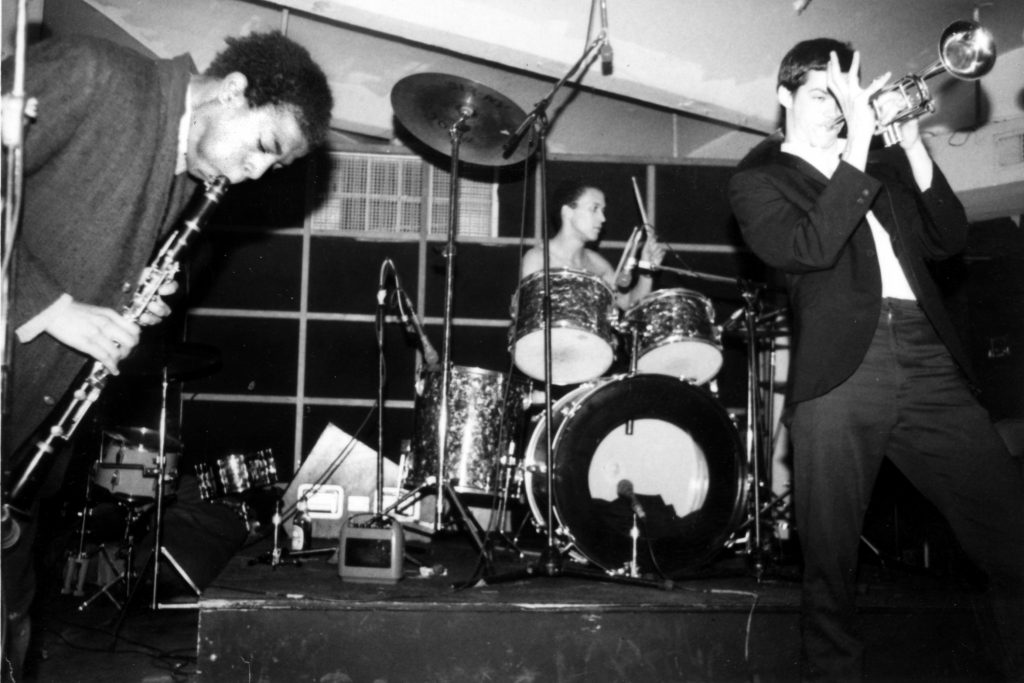 Sara Driver’s delicious, detailed but restlessly suggestive “Boom for Real: The Early Teenage Years of Jean-Michel Basquiat” reaches back three decades to the first days of young Basquiat on the streets of New York City and its art scene. It’s a punchy lozenge, capturing formative days of an artist and the witnesses left to its stew of personalities and art-making. “If we don’t tell the history, then others will, who weren’t there and don’t know the truth,” Driver’s friend, Alexis Adler, says of the time. (Secret history courses through Driver’s modest body of work: surfaces; secrets.) In 1978, when the young Jean-Michel was eighteen, Adler had given him a key to her place. Only recently, she unearthed a long-buried trove of art and artifacts, including over 150 photos she had taken, which was the impetus for Driver to dive into the lost scenes she herself had seen—not limited to the swirl of musicians, dancers, sculptors, filmmakers and painters on the Lower East Side of that brief, fragrant moment.

Greek film observer Lilly Papagianni has recognized the “fantastical and supernatural elements, dreams, phantoms and legends” that filter through the narratives of Driver’s films, informed as they are by settings and locations, as well as a sense of the elusive traces that finite stories don’t quite tell, but must suggest in order to haunt an audience. “Boom for Real” is no exception.

So why this moment to capture this very specific slice of moments in Basquiat’s life? This modest but detailed assemblage, this collage?
My friend Alexis Adler, who lived with him from 1979 to 1980, instigated it. Hurricane Sandy hit New York in late October 2012. And I went to her house. She had retrieved all this artwork that she had put away long ago. She retrieved it because of the flooding in her area. All of it fine, and it was over sixty drawings, writings, his notebooks. She remembered that she had a box of clothes that he had painted on, and then these wonderful photographs that she had taken of him when they lived together. When I saw everything she had, I thought, my god, this is such a great window into showing his development, his early development as an artist. And, the city of New York. Just felt like the two went hand-in-hand.

It’s like when a building is torn down, and you might see evidence, traces, of a prior tenement or of a ghost sign of hundred-year-old advertising. Suddenly, there’s this portrait you didn’t know was there.
Right. Exactly. Exactly. It was amazing she had the foresight to keep all this material. He was so transient at that time. People were just throwing away what he was scribbling on. Adler, and Glenn O’Brien, he also kept some of his early work. Very little of it exists.

Since it was because of Hurricane Sandy, in a sense, this film is itself also an act of God.
[laughs] Yeah. There you go! But the film was also made very much in the spirit of how we’ve made films at that time. I had a lot of trouble getting financing, and this one I just bought a camera and started shooting.

I saw a few names in the producer credits who are known for being in the right place at the right time—Paulo Branco, Christos Konstantakopoulos.
Yeah, they did. They absolutely did. And they’re phenomenal. Christos really got the film just started, Paulo came in and helped. And also Jean Labadie and our French distributor. That was all very helpful! And there are no American names on that group…

When [your partner] Jim [Jarmusch] was showing “Only Lovers Left Alive” at the Thessaloniki International Film Festival , he told me something to the effect that Christos is the kind of guy who might only give you $50,000 but it’s just the right $50,000.
Exactly. He came in early on and he was the reason I was able to shoot, to get my interviews. But I had to do everything very focused, I had so little money. I had to be very selective as to who I interviewed. Things like that.

So your ratio of material to archive was small.
Pretty small. We shot the interviews, we had three cameras, my camera, a wonderful guy, Adam Benn, who is a professional cinematographer and then Jim’s brother, Tom Jarmusch was on funky mediums like Super 8.

I’m always amazed by the good stuff Jim gets out of defunct technology, including on his Instagram account.
I know! He’s remarkable, with an amazing eye.

The film gives the sensation that Jean-Michel was ever-present on “the scene,” and not just one scene, but all these scenes of that moment. Did he seem that way in the moment, a kind of trickster in the margins, on the corner? Was he just a figure who just happened to be everywhere?
I think all of us were everywhere! Everybody was going to see bands, going to see peoples’ shows. We were all in the same area… I think Luc [Sante in the film] describes him as “impish,” and, yeah, sort of everywhere.

You offer a sense of him, not as fully formed in any way, but this very rich apparition. The movie feels like a collective memory, and from what you just said, and the dredging up of the archive, it’s like this fragment was a ghost film that hadn’t been made, or distilled. But it was floating above everyone who shared this moment with him, and that would include you.
Right. I feel, in a way—I was thinking the other day—I knew him the way I depict him in the film. Which is, seeing him on the street. Seeing him interacting… And yes, I always wanted to make the film where he was a ghost in the film, he was like a touchstone. A lot of people, I know, are so curious where he came from, but I thought an interesting way to approach an artist was to show the environment that nurtured him in these very formative years.