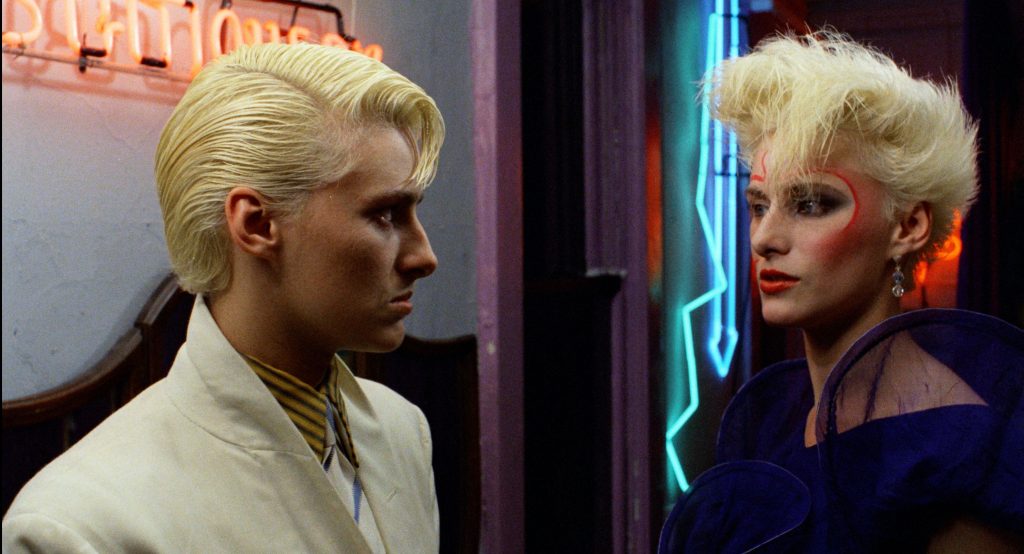 A monstrous, grandiose, often-glorious disco-cum-punk neon genderfuck science-fiction singularity, director Slava Tsukerman’s first American feature, the 1982 “Liquid Sky” rises from the netherworld of YouTube bootlegs and badly tracking elderly VHS copies to a gleaming glam 4K digital restoration that enthralls and disturbs in equal measure. (Tsukerman and his wife had relocated from Russia, then Israel, to the Manhattan of 1976, which Tsukerman says he believed was the intellectual capital of the world in that moment.)

A time capsule of a lost New York scene and a vision of a gleaming, impossibly beautiful and fucked-up New York filled with unapologetic sexuality, revenge for sexual violence, aliens on a quest for high-grade heroin and men lured to fuck who then disappear upon orgasm, as co-written and embodied by star-co-star Anne Carlisle in a dual role, “Liquid Sky” is a flabbergasting spectacle. Its bravura flushes away despairing undercurrents. Another aspect chills, with the news of an unnamed fatal disease sweeping the city in the year before its release: “I wanted, artistically, to put sex and drugs together. I was completely surprised when AIDS happened,” Tsukerman told Tablet earlier this year. “I didn’t know it would happen that way.” The phrase “cult movie” rings hollow in my ears, but “Liquid Sky” has a deserved cult, and in all its beauty and outrage, deserves a larger one. 112m. (Ray Pride)