The archive has become self-aware.

It’s as if modern moviegoing were from the “Terminator” saga: “The system goes online April 2016 when the Metrograph opened in Manhattan. In a panic, they program and watch every movie that suits a genre or typology or filmography or fulfills a listicle.”

It is the best of times, it is the most frantic of times. Chicago has the Siskel Film Center of the School of the Art Institute, Facets, the Music Box, Doc Films, Chicago Film Society and so many other groups programming most weeks of the year. New York City also gained the wildly ambitious, restored Quad Cinema with its own toppling mountain of the better moments of movie history. Film fan heavy breathing quickly turned to breathlessness. Film Twitter takes flight at each flush of canny curation.

The signs aren’t galvanizing for sustainability of theatrical feature film exhibition, but its traces, its artifacts—classic films on bigger, properly illuminated screens—the reflected light of the things a hundred years of cinema have left behind: It’s electric.

“Film as dream, film as music,” Ingmar Bergman wrote in “The Magic Lantern” in 1987. “No form of art goes beyond ordinary consciousness as film does, straight to our emotions, deep into the twilight room of the soul.”

Bergman believed that through-and-through, amply demonstrated by the thirty-four or so features and extended television versions he crafted across a fifty-plus year career with a wide range of gifted collaborators. (There was a raft of theater, too, most lost on night whispers of the twentieth century.)

He’ll be back: Janus Films is releasing digital restorations of almost all of his handiwork this summer, including at Siskel, with local cinémathèques choosing whether to program everything, an immensity, or a mere daunting of Bergman’s film work. Janus, with the logo familiar from its historical releases, its acquisitions since 2009 and its Criterion output, began its association with Bergman in the 1950s, grossing over a million dollars from his work in 1959 and winning an Academy Award for Bergman’s “Virgin Spring” in 1960. Janus Films’ concerted efforts to burnish Bergman as an author of morality plays (and sexually charged dramas) through calculated release strategies is noted in Tino Balio’s essential history, “The Foreign Film Renaissance on American Screens, 1946–1973,” and with this retrospective, continues that tradition, beyond video, beyond Blu-ray via Criterion and onto digital projection: from the Swedish soundstage to scandalized American cities and college towns to “art” enshrined in the archive.

The intensity of Bergman’s work can surprise the initiate, in levity and passion, in lust and self-excoriation. What I drew from seeing Bergman films in college is a far cry from what’s available on screen as a lifelong film critic. “’Persona’ is bound to trouble, perplex and frustrate most filmgoers. Or so one would suppose,” Susan Sontag wrote a decade into the high art-house years, where reviewers alternated the altar and the cross for Bergman as artist. Pretentious fraud or soulful sinner? These dividing lines recur in recent writings: how does Bergman compare today to his prior reception?

More importantly, how will these dramatically diverse movies be received in 2018, and how will I perceive them? I think this, even with copies of Bergman’s movies on my office shelves, movies like “Persona” and “Scenes from a Marriage” and “Fanny and Alexander.” Will they seem fresh, bulletins from another time and place, or irrelevant museum pieces? (There is joy in the rediscovery, excavating anew, of a movie you thought you had consumed whole those many years ago.) Will Bergman’s voice keen clearly in a year where a $200-million-plus budgeted product like “Ready Player One” and “Solo” failed catastrophically, and a wondrous welter of cinephilia-embracing smaller films dazzle, like Chloé Zhao’s “The Rider,” Lynne Ramsay’s “You Were Never Really Here,” Claire Denis’ “Let The Sunshine In,” and Paul Schrader’s “First Reformed.” (The box-office spark for Schrader’s late-career concatenation of all his narrative and religious leanings is heartening.) 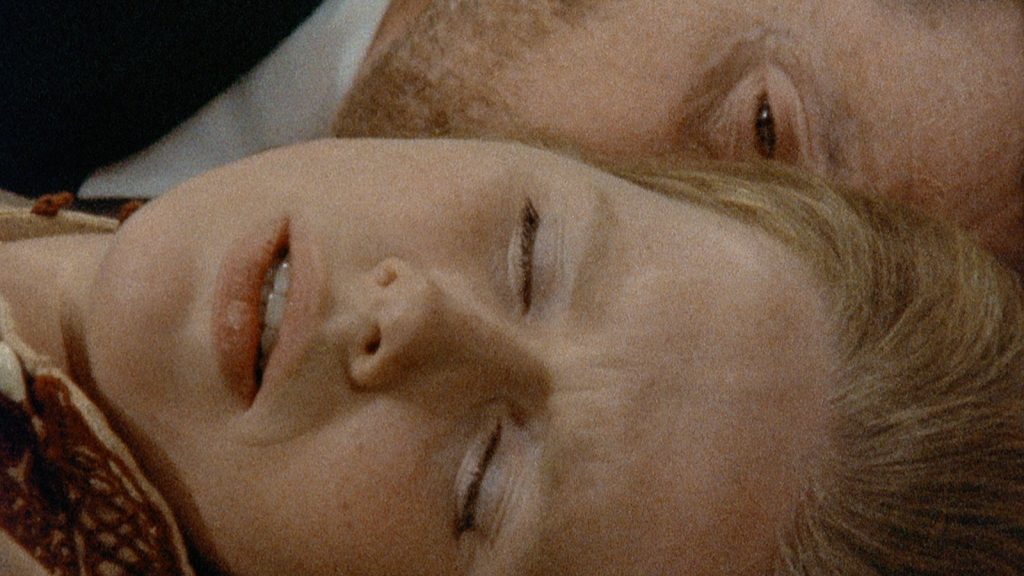 Ingmar Bergman’s “Scenes From A Marriage”

I mentioned to a fiftysomething film patron that I hoped to see on screen ten or twelve of however many of the Bergman films that are programmed at the Film Center across the summer, but with the usual delirious pileup of retrospectives, I doubted I would see more than four or five. And I don’t want to preview them on video for review purposes: the prints, the prints! Where can you even see Bergman films, they asked? I have some DVDs, some Blu-rays, but they’re not the same as the bursting light of the artists’ intentions. “Who the fuck even has a Blu-ray player anymore?” they said as my eyebrows raised and I choked back the Netflix Talk, which, in the essence a local filmmaker shared with me, “Convenience is about the only advantage, and it’s convenience for such limited choice.”

And then I think, these retrospectives are the ultimate convenience, the boldest convenience on the horizon if you care deeply about movies. It’s as if the century of movies could be called to a close, the form given over to revival after revival and reevaluation after reevaluation. So much beauty still to discover, right?

The cinema has a great future behind it.

And yet, we don’t know every person sitting beside us in the dark at any of these movies, at Ingmar Bergman’s heaping helpings of heavy-osity or of carnal contemplation or of the obstinacy of human meanness. (There be visionaries. I promise.) A heartening thing talking to modern image-makers forty-five and younger, in Chicago and elsewhere, is the mad range of influence: these artworks, like Bergman’s life’s work, are not finite. Respected, preserved, revived, they are the sediment of things to come: sounds, images, the human face, the silence of God. Inspired, a producer may be born, a financier may be stricken, an artist will rush toward inner lyricism. He’ll be back.

(A passage about restorations and print availability that was in the magazine edition was corrected June 15.)