Therese Patricia Okoumou climbed the Statue of Liberty on July 4—the day “The First Purge” opened in theaters—resting in place there a few hours as she demanded the release of all migrant children taken at the U.S. border. Alfred Hitchcock thrived on iconic images like the one of the immigrant Okoumou surrounded by SWAT-garbed policemen as she sheltered under the upraised sole of Lady Liberty. “North by Northwest” is a collection of moments, including scamper and peril across the four presidents carved onto Mount Rushmore. “Northwest” had a different title when it was first a twinkle in Hitchcock’s eye: “The Man In Lincoln’s Nose.” Okoumou, emerging from the copper folds of the statue’s raiment, could have been Hitchcock’s “The Woman In Liberty’s Footsteps.” There is fierce visualization in “The First Purge,” and even if it lacks for a singular, bold, iconic, everlasting image like that of Okoumou, man, does it swing for the razor-wire fences.

The agitated dismay of “The First Purge” takes place now. Prior “Purges” were future now, decades forward. (Now is their past.) Our failing civil liberties are preamble to the wanton but sanctioned slaughter to come. The trial run of the Purge burns across twelve hours on Staten Island (where, not so coincidentally, Trump has repeatedly claimed there are murderous gangs slaughtering innocent girls). The radical right New Founding Fathers of America (NFFA) tests a sociological theory on the isolated island. But the populace doesn’t turn violent, the way the surveillance overseers had hoped. A spark is needed to torch the town: in “The First Purge” (actually shot in Buffalo), the most dangerous gang turns out to be squadrons of mercenaries described as “like Blackwater” who perform a false flag operation to provide “proof” that “the people” demand the purge. It’s also a eugenics experiment, sketched in but with damning allusion to events past, and events today at the U.S. border. 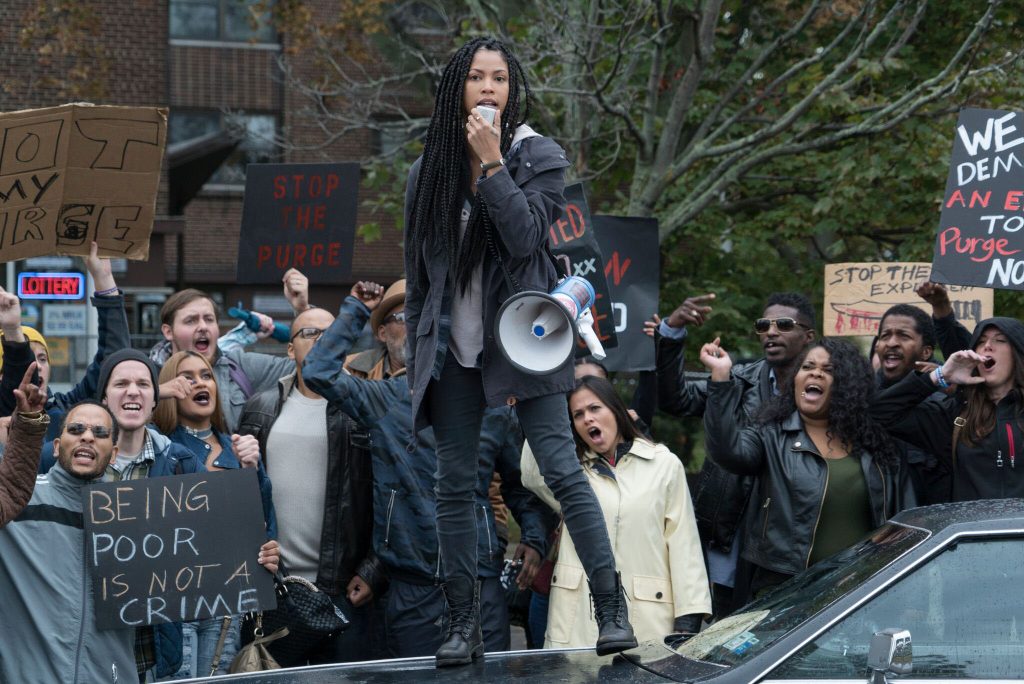 Once “The First Purge” finds its footing, sophomore director Gerard McMurray delivers an assertive, aggressive, restless horror movie of sustained sensation about being “Other” in America. Moments that allude to other movies are less homage than highly-efficient employment of the action movie toolkit. Heightened awareness of contemporary politics enhances the stream of quickly-sketched awareness bombs, not limited to the racist politics of the NFFA, the apparition of a Sean Spicer-light spokesman and unvarnished KKK, Confederate, NRA and Nazi imagery. As well as “Fuckin’ Russian?” a character tells to the flood of imported mercs emerging from clandestine deployment and onto the street, “Something fucky is going down.” (Comcast, the owner of Universal Pictures, opens “The First Purge” with a trailer-cum-commercial for its Xfinity broadband service.) 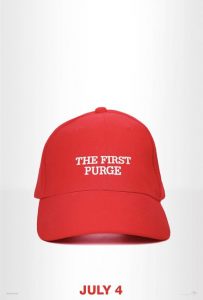 McMurray told USA Today his aim was to shift the nihilistic concept in this fourth entry of the five-year-old franchise through people of color. “The genre of horror lets us wrestle with the evils of our real world. People come in with all kinds of scams and ideas of what they want to do to your community or how they see your community. Our communities are being gentrified now and we’re seeing a lot of change, so that rang true for me.”

Unapologetically obscenity-laden, “The First Purge,” as both exploitation and elevation, has the most expressionistic use of digital geysers of blood in memory, color and contour blasphemously rich against the palette of shadowed night. Like Therese Patricia Okoumou and like Boots Riley’s “Sorry to Bother You” (also released on the Fourth of July weekend), “The First Purge” believes in resistance and the necessary fight for something called the U.S.A. With Y’lan Noel, Lex Scott Davis, Joivan Wade, Steve Harris, Marisa Tomei, Van Jones, Mugga, Rotimi Paul, Melonie Diaz. 112m. (Ray Pride)

“The First Purge” is now playing.