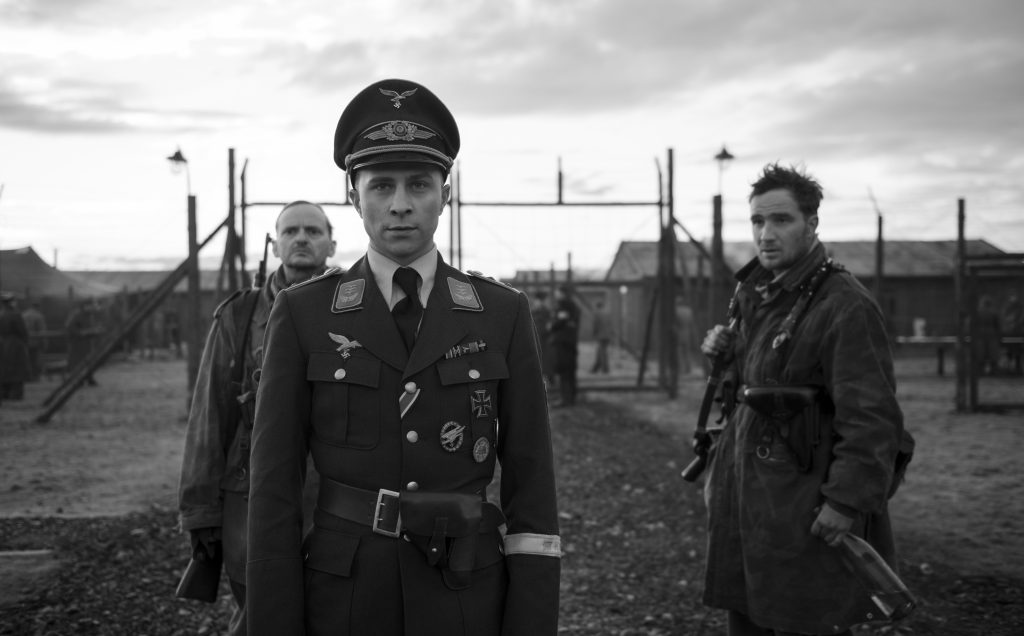 Clothes can make the man. Appearances are readily crafted to deceive. Robert Schwentke’s ruthlessly proficient, based-on-fact black-and-white “The Captain” (Der Hauptmann) begins near the end of World War II with twenty-one-year-old Willi Herold (Max Hubacher), a German conscript, a deserter who hopes only to escape the inevitable defeat, finding a Nazi officer’s abandoned uniform. Now fairytale-trim in his misbegotten raiment, he’s taken for military material and assembles his own ragtag band of followers, with whom he takes a camp holding other German deserters. Schwentke’s dance is delicate yet urgent. Willi also shoulders on the mantel of malice, even depravity. “Our goal is not to justify or forgive Herold’s actions by contextualizing them—or, worse, by introducing a moral relativism—but to understand the frame of reference which made these actions possible and so arrive at the general through the specific,” Schwentke has written. “In psychological terms, the inhabitants of the Third Reich were as normal as people in all other societies at all other times. The spectrum of perpetrators was a cross-section of normal society and no specific group of people proved immune to the temptation [to] ‘inhumanity with impunity.’ They are us. We are them. The past is now.” Each hostile gesture, each harsh act suggests not just timelessness but cruel timeliness. The cold precision of Schwentke’s filmmaking is augmented by the brute malice of Martin Todsharow’s score. (Schwentke’s credits include larger-scale, English-language movies like “Flightplan,” “The Time Traveler’s Wife,” “RED” and “R.I.P.D.”) 118m. (Ray Pride)

“The Captain” opens Friday, August 3 at the Music Box.