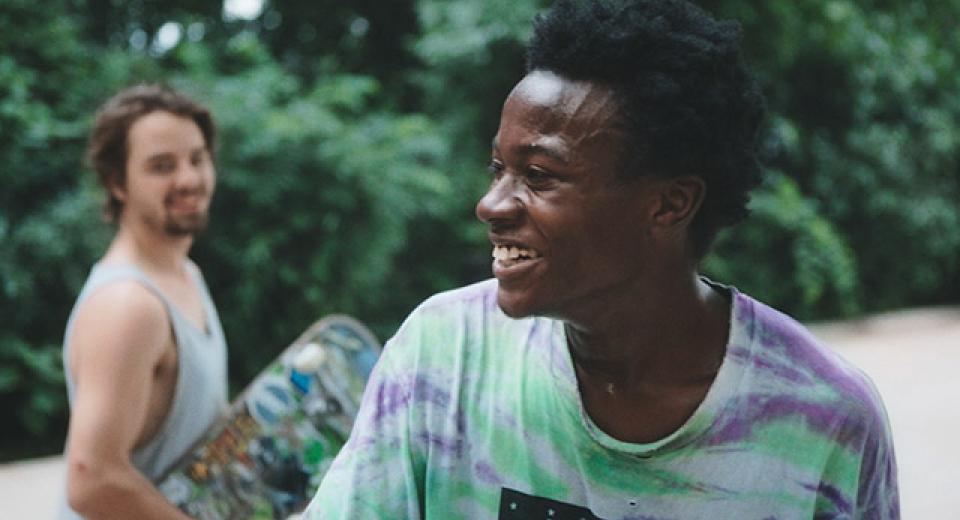 In Bing Liu’s masterful, momentous debut documentary, a friend muses, “When you’re a kid, you just do, you just act, then somewhere along the line, everyone loses that.” Under the main titles, the camera rushes forward, a montage of shots from behind three young men skating the unpopulated center city of Rockford, about ninety miles northwest of Chicago. The music is dreamy. There’s a hint of melancholy. Jump cut, jump cut, the sequence suggests the physicality of escape in their lives, and a time-slipping-forward crush that we are unprepared to witness. The three sway as they control the pavement: supple, languorously elegant, arriving from daily grace to a plain and ordinary neighborhood.

Bing’s friends are twenty-three-year-old Zack, at odds with his girlfriend after the birth of their son, and seventeen-year-old Keire, who is searching for his racial identity after his father dies. With twelve years of footage back to their shared teen years, Liu appraises a specific weight the friends each carry, the repressed emotions despite escape into the acrobatic, balletic physicality of skating: the bruising, daunting heirloom of volatile childhoods. Issues of class, race and masculinity disperse across the landscape of “Minding the Gap,” the issues both submerged and electrifyingly present, embodied by his subjects, coolly observed in footage that can appear deceptively raw. All is cinema.

“When Bing had the original concept of traveling around the country and talking to all these skateboarders about their relationship with their fathers it was like, immediately, okay, there’s something here, we see that potential and we will stick with it,” co-executive producer and Kartemquin Films artistic director Gordon Quinn told me earlier this year. “The key is, it’s in your gut, you sense there’s something happening here, he’s in it for the long haul. We knew right from the start Bing wasn’t going to get bored with this and walk away. It just took him a while to find the story and the through-line and then get to the finish line. We’re in the Midwest here, we’re in Chicago. So Bing is making a film in Rockford, he’s not commuting from LA. He’s in the community where he’s making the film. He’s committed. The diversity we look for, it’s not gender and race, it’s also diversity of location, that we’re part of the country.”

Liu himself describes his accomplishment in direct yet still opaque terms: “In the course of editing the film, I realized that Zack, Keire and I were all harboring toxic experiences buried under the weight of years of societal and personal repression, and we all chose our own ways of dealing with that pressure. The film has given me a sense of clarity about myself and how, while there’s no one-size-fits-all solution, some ways of coping aren’t sustainable.”

Bing, a story director and a director of photography for Steve James’ documentary miniseries, “America to Me,” is first seen through a fisheye lens, gawky, grinning through braces. “Are you ready for some fucking intense action?” he says, miming clapsticks with two fingers. “Take one!” (Casual profanity is the rule throughout.)

“Why are you filming everything?” pal-peer-subject Zack says to camera, and not likely for the first or last time. “Because I want to make a montage,” Bing replies. “Are you going to be putting me smoking weed in the thing?” Zack says, hitting it. 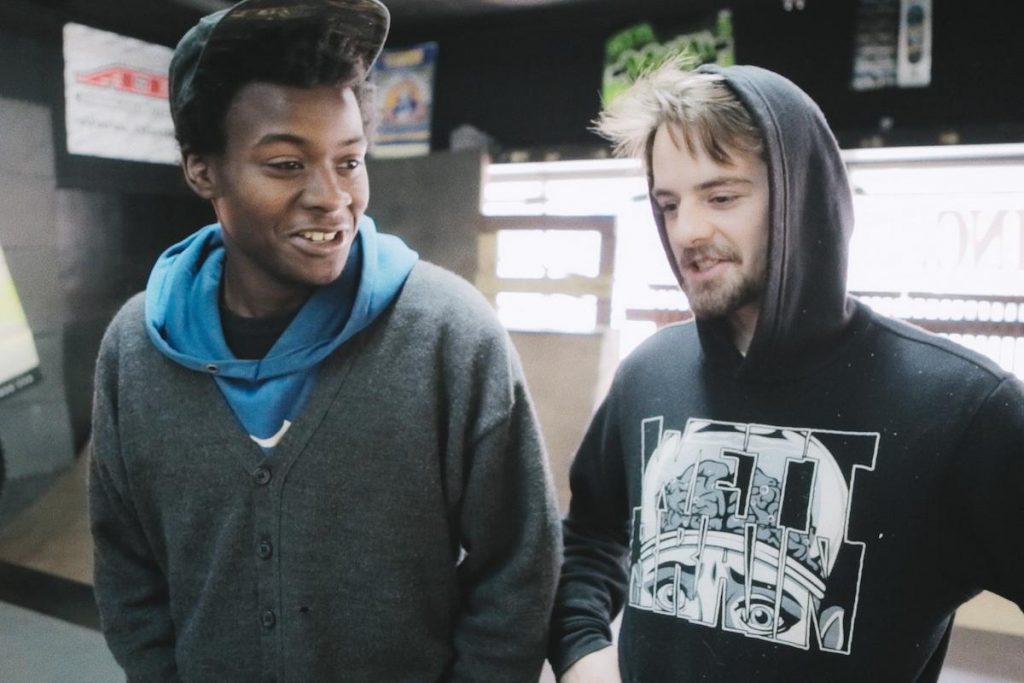 Formally gorgeous, with its fleet and fluent camerawork, “Minding the Gap” is also lastingly, emblematically, shatteringly steeped in sorrow. Can a male child of toxic masculinity stop learned behaviors dead before another, then another generation arrives?

This is a sublime longitudinal work, with supportive collaborators providing the time and determination necessary to fashion elemental rhythms. The dense yet translucent editing of “Minding the Gap” is what pushes it toward heartbreak. (Joshua Altman shares editing credit with Liu.) Multiple viewings evoke ache more and more, as the movie works on so many levels of emotion, of time lost, of time regained, in each gesture, image, turn of phrase. This is not a puzzle made plain, but a narrative carved from passing instants: refracted, shaped, revealed, reflecting. “Minding the Gap” is dazzling sculpture.

There is a shot in sparkling sunlight on a porch deck as a cell phone with an image of a fetus in the womb is brandished, the sunlight adding glare that makes the screen’s image less precise yet a familiar and heartening form. What have we in the seconds of each of the shots of this brief passage? A potential new generation viewed by a dazed present generation, just as Zack has spoken of keeping smoke and weed out of the house in the coming months, 312 longneck in hand. Watch this film a second or third time and that scene holds the furious weight of potential trainwreck. Only a few moments earlier, another of the trio said, in the offhanded plainspeech of the movie, “I feel like life might be moving too fast. We have to fully grow up and it’s gonna fuckin’ suck.” 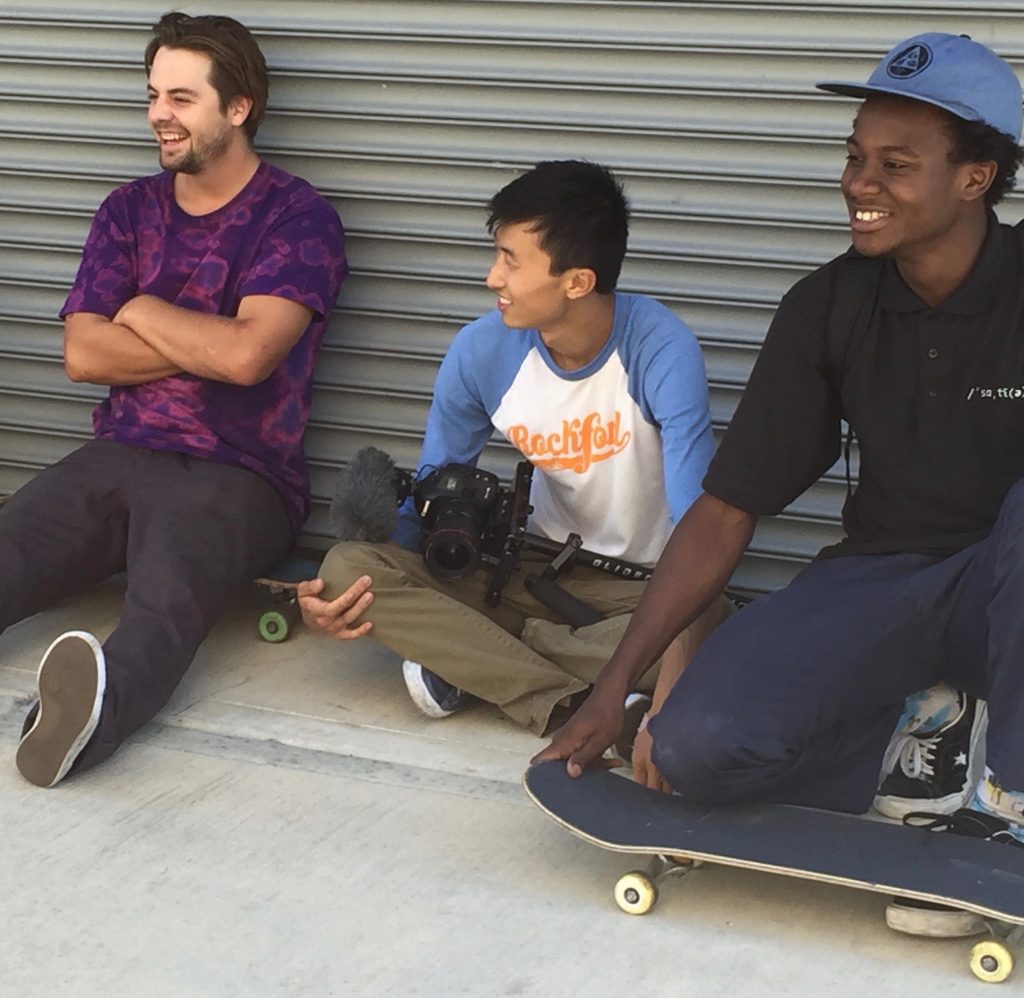 These images punch above their informational class because they reflect back, they reflect forward. Liu cites Spike Jonze’s pioneering skate videos; Harmony Korine’s “Gummo”; “Kids” and Richard Linklater’s “Waking Life” and “Slacker” as movies he looked toward while contemplating “Minding the Gap.” But of course, another Linklater piece resonates: “Boyhood,” with its years-long production, parallels Liu’s own. It’s cheery, almost, when one of Bing’s friends tells him, “I always thought it was cool how you can put all these different moments into like one long video and you’d make it seem like it was the best time ever.”

If a town’s a ghost town, like Rockford is drawn here, it holds ghosts, it’s not only that it’s deserted or abandoned. Among the ghosts are billboards that prompt chiropractic treatment or advertise virtues of the Boys & Girls club. Every image, to the frame, echoes relationships from hopeful, crunchy childhood to fraught present. Across years, Bing, Keire and Zack are held by their fathers’ ghosts. The ghosts go back, then sound down generations. When are the ghosts, like the town, finally abandoned?

Keire’s skateboard is sketched with the words “This device cures heartbreak,” echoing “This machine kills fascists” written on Woody Guthrie’s guitar. “Minding the Gap” describes heartbreak, anatomizes heartbreak and suggests necessary stages of recovery from generational heartbreak that cannot but break your fucking heart. There are few perfect films and fewer that are pure. Where the purity of “Minding the Gap” lies is up to each grateful viewer.

“Minding the Gap” opens at Siskel  Friday,August 31 for a two-week run and streams on Hulu beginning Friday, August 17. “America to Me” debuts August 26 on Starz. Ray Pride’s March 2018 Kartemquin profile includes conversation about “Minding the Gap.” 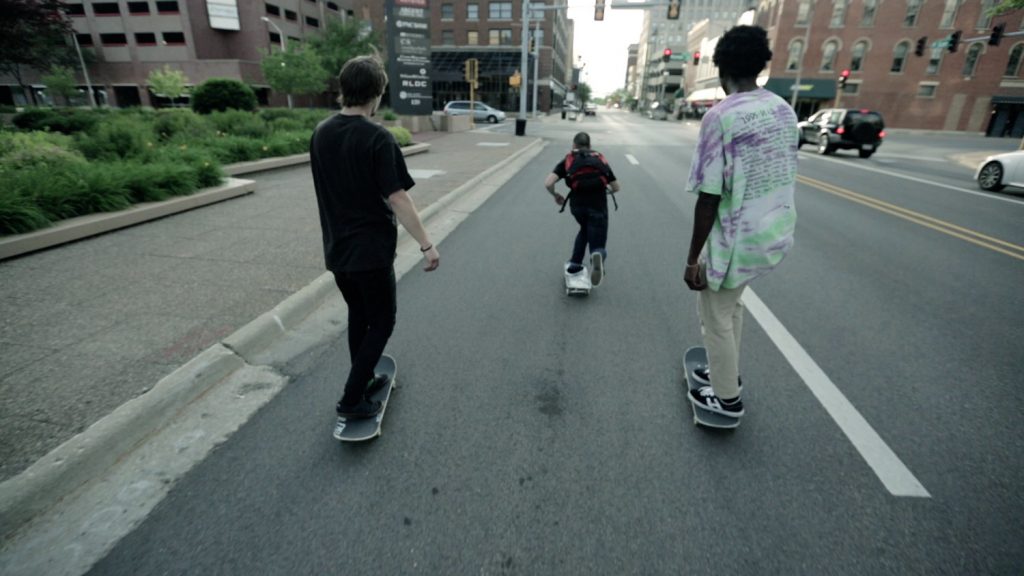