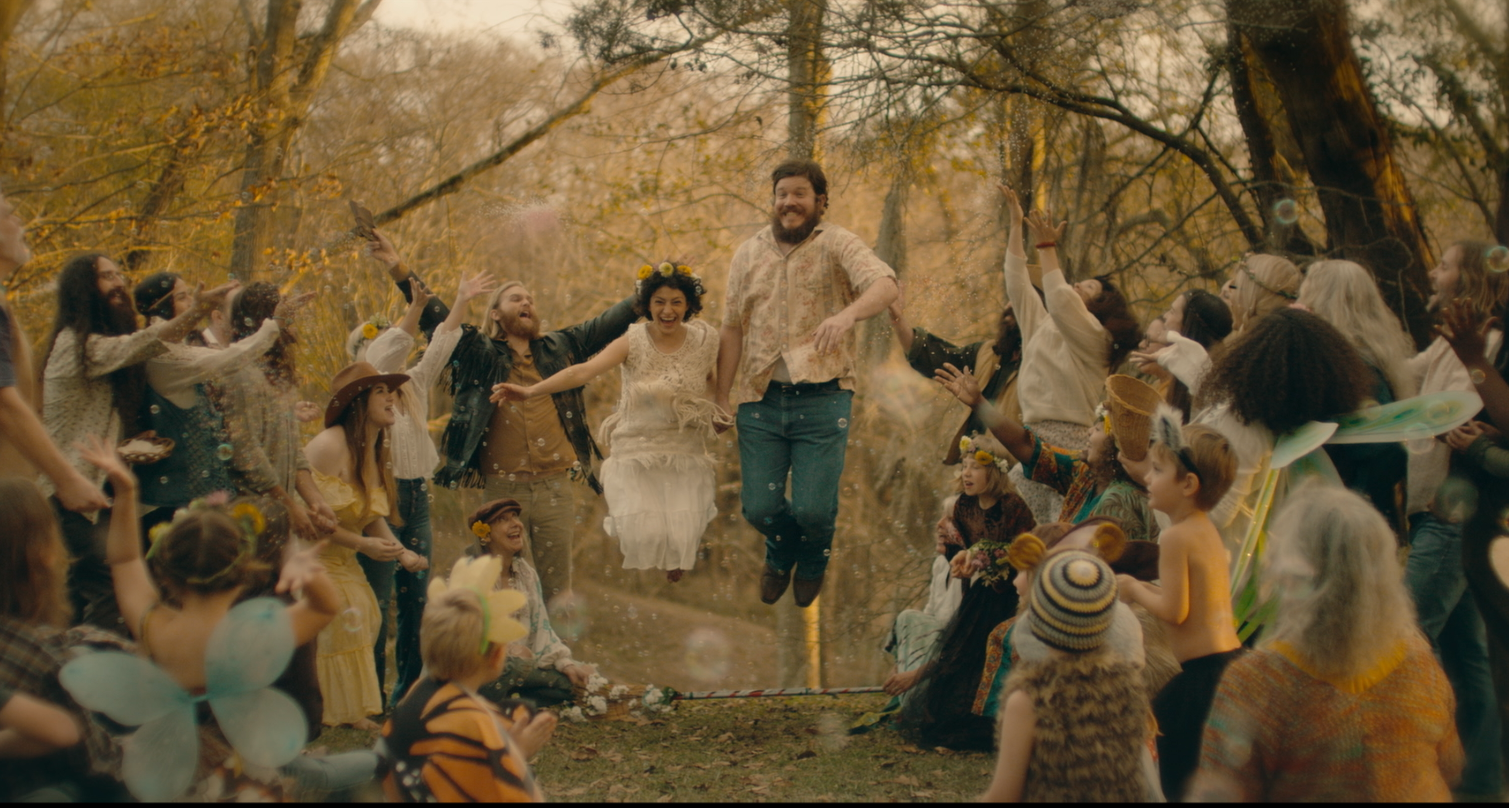 Ethan Hawke doesn’t come right out and say what he’s up to in “Blaze,” but it’s snaky goodness: time and space, all in mind and out of whack.

Splinters assemble and disassemble perspectives on a now-gone Austin, Texas songwriter, bright but lost, frustrated at the fall of each note, each sung syllable. Hard to live with; harder to ignore. Hawke calls “Blaze” a country-western opera, and the singer-songwriter at the center, Blaze Foley, “the Snuffleupagus of the outlaw country music scene,” whom he discovered via John Prine’s cover of the song “Clay Pigeons,” “one of the best country songs I’d ever heard.” (Townes Van Zandt, also fictionalized here, wrote and played with Foley.) Not only did Hawke discover Foley’s music, but also “Living in the Woods in a Tree: Remembering Blaze Foley,” the memoir of his partner, Sybil Rosen. The form of the film is the form of a song: a song sung, yes, but also a song struck; a song moaned; a song performed; a song sold; a song sundered; a song, a song as subterranean river, sometimes a trickle, sometimes a truculent rivulet, and often, so often, a waterfall of eager, needful romantic yearning.

Movies attempt to depict altered states of consciousness. Single scenes sometimes sing: drug trips and such. Some filmmakers, many from the house of editing, specialize in fracturing time, such as the French master Alain Resnais (“Last Year at Marienbad”). And there’s always the set-to-fail tries at capturing in two dimensions the real-life Dionysian aspect of the musical performer up on stage for momentary worship under the heat of lights and gaze. “Blaze” is after something else: the speed and slur of thought as distilled into sounds that soar above the souls that created them.

At first, “Blaze” is buzzy, Robert Altman stoned, not like an Altman movie per se, but stoned like the bear papafamilias himself. We’ve seen portraits of charismatic shambling fuckups on the music scene, such as Daryl Duke’s great, unforgiving 1972 “Payday” with Rip Torn—but the time scheme, the daze of Blaze himself, confides in the songs, convincing them to divine the flow of what we witness as different, differing memories. Hawke carries this shaggy-teddy-bear tale as a weave, a wooze, a brimming lapful and brainful of fracture, as a bountifully bearded movie, a toppling-tipsy film. But it is also a bountifully barefoot movie, a barefoot celebration, barefoot in the bathtub, barefoot across several rooms, and even more hippy-to-the-hippiest, a joyous extreme slow-motion group leap into the air at a celebration in the woods. The moment feels like it goes on forever, and of course, in the memory of those there under those trees, and now us, it will go on. While the palette tends to nicotine monochrome, images of furnishings and roadside matters recall the great William Eggleston and Saul Leiter. Glass and light and atmosphere intersect to picturesque but precise effect.

In “Blaze,” songs are time: played, underlaid, performed, sung asunder. Time is depicted as memory caught in the tender underbrush of music and words. Songs straddle, barrooms bicker back, we are caught in the weft of Blaze’s slipstream mind: Hawke’s nonlinear approach perturbs, then seduces, a solipsistic, fractured impressionistic biography of the mind making the songs. Hawke speaks a lot of guff and guffaw about his artistic intentions, and there are always some small diamonds. “There’s a great mystery around human creativity: what it means to us, where it comes from, where it goes,” he reflects on his braided narrative. “I’ve never been interested in ‘what’ happens in a story, I’ve always been interested in ‘how’ it happens.”

In her memoir, Foley’s partner, Sybil Rosen, wrote, “What is the legend? It’s the homeless troubadour refusing to bend to the demands of success. It’s the champion of the downtrodden, the bellicose drunk, the gentle giant children adored. But mostly it’s the music—so direct and authentic it feels as if he is singing about you personally, wrapping your life in melodies that can heal.” Ben Dickey sounds every literal and figurative note and his habitation lingers for days, just as Foley’s songs do. Mumbling but magnetic, an eyes-down big guy lashed with wounds of regret and relentless self-remonstration, Blaze is a shy man. A shy man that mumbles. A shy man that drinks. A shy man that emits sounds, lovely sounds, with words that match with high romance, best intentions, memories of disappointment, largely from the self. Blaze bursts with prompts: “Do you believe people can live forever?”; “I mean… we can’t be squirrels”; and “’Cos you wouldn’t like me on Thorazine!”

And Blaze’s refrain of refrains: “There are no goodbyes, just see-ya-laters.”