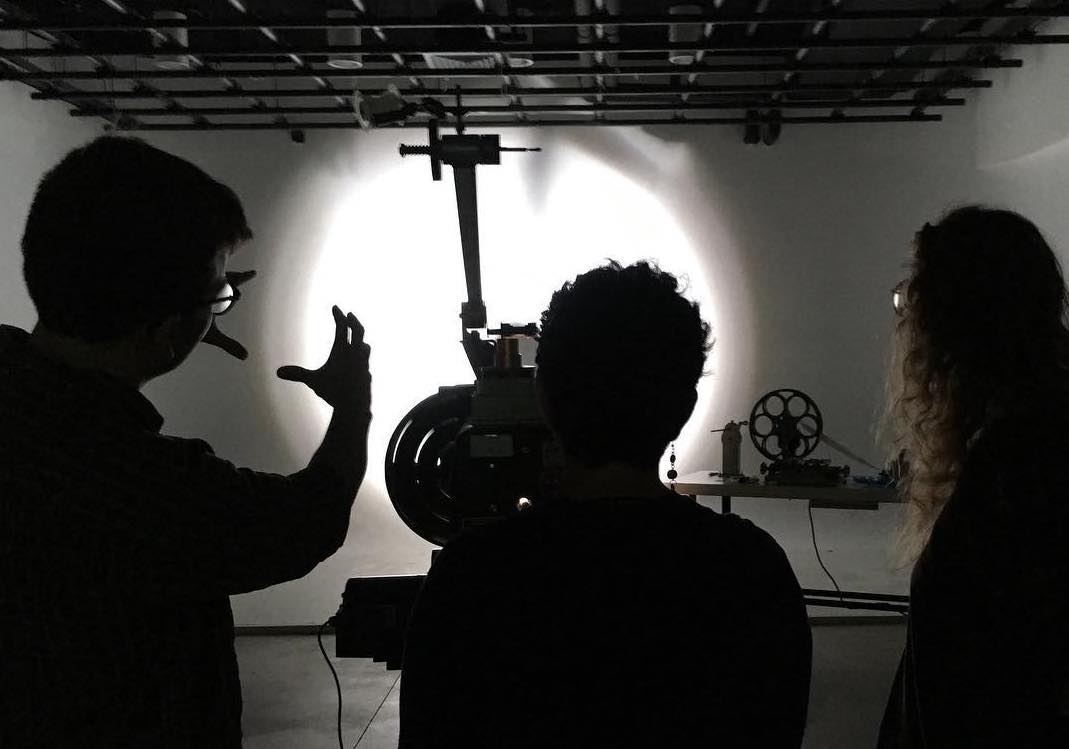 The Chicago Film Society has scheduled twenty screenings this fall across the landscape: at the Music Box, Northeastern Illinois University, the Chicago History Museum and Chicago Filmmakers. The quintet behind it all—Julian Antos, Rebecca Lyon, Cameron Worden, Kyle Westphal and Becca Hall—is expanding its preservation game, as well as commissioning a singular 35mm print of Andrew Bujalski’s analog-video hallucination, “Computer Chess.” We gathered conspirators Antos, Lyon, Worden and Westphal for an update on their celluloid sickness, their seven-year-old, nonprofit artisanal enterprise and how to encourage a new generation of emulsion handlers.

Rebecca Lyon: Julian and I were invited to Alamo Drafthouse in Austin in 2016 to teach a section on “archival film handling and inspection” in what was then the second of two workshops put on by the Association of Moving Image Archivists. It’s a work-in-progress, but the longterm goal with these workshops is to fill the void in formal training for film projectionists, specifically for people handling archival prints. Archival prints come with a lot of rules in place to protect the longevity of the print that have to do with how you handle, project, even ship it. And if you don’t follow those rules the archive won’t lend you prints. So if you do a bad job, you lose access to this important world of films, some of which don’t exist digitally. CFS signed on to host a workshop in Chicago for sixteen students, the hope being that eventually these will become a regional thing that any group with a certain skill level can teach. We had people from every corner of the country come, it was wonderful! Houston, Minneapolis, Los Angeles, Portland, Iowa City, New Orleans, there was even a woman from Mexico City. CFS is in a good position to teach this stuff; we’ve all been projectionists at one time, and three of us still are. We have close relationships with film archives and archivists, so we understand their side in all of this. Plus, we’ve all been working in the industry during this weird period of transition, and between the five of us we’ve taken a photo of every type of film damage, optical track, shipping disaster, you name it, that’s crossed our paths in the past ten years. Our slideshows are really good.

Kyle Westphal: We’ve had a monthly showcase at the Music Box since 2016, which has developed an audience distinct from our NEIU screenings, although some brave souls attend both. We had our most successful show ever, at any venue, with “Urgh! A Music War” back in July. We generally shy away from canonical titles, not because we don’t like them, but because they’re shown so often and are available on disk and streaming. That strategy has worked well, but we’ll make an exception when something comes along like the IB Technicolor 35mm print of “Rio Bravo,” which we borrowed from a private collector. We all love that movie and thought the opportunity to present it in an original print was too good to pass up—especially because modern prints of “Rio Bravo” don’t look so hot. That’s important about CFS: we want to give people the ability to look at films—even films they’ve seen a dozen times—from a new, materialist perspective. 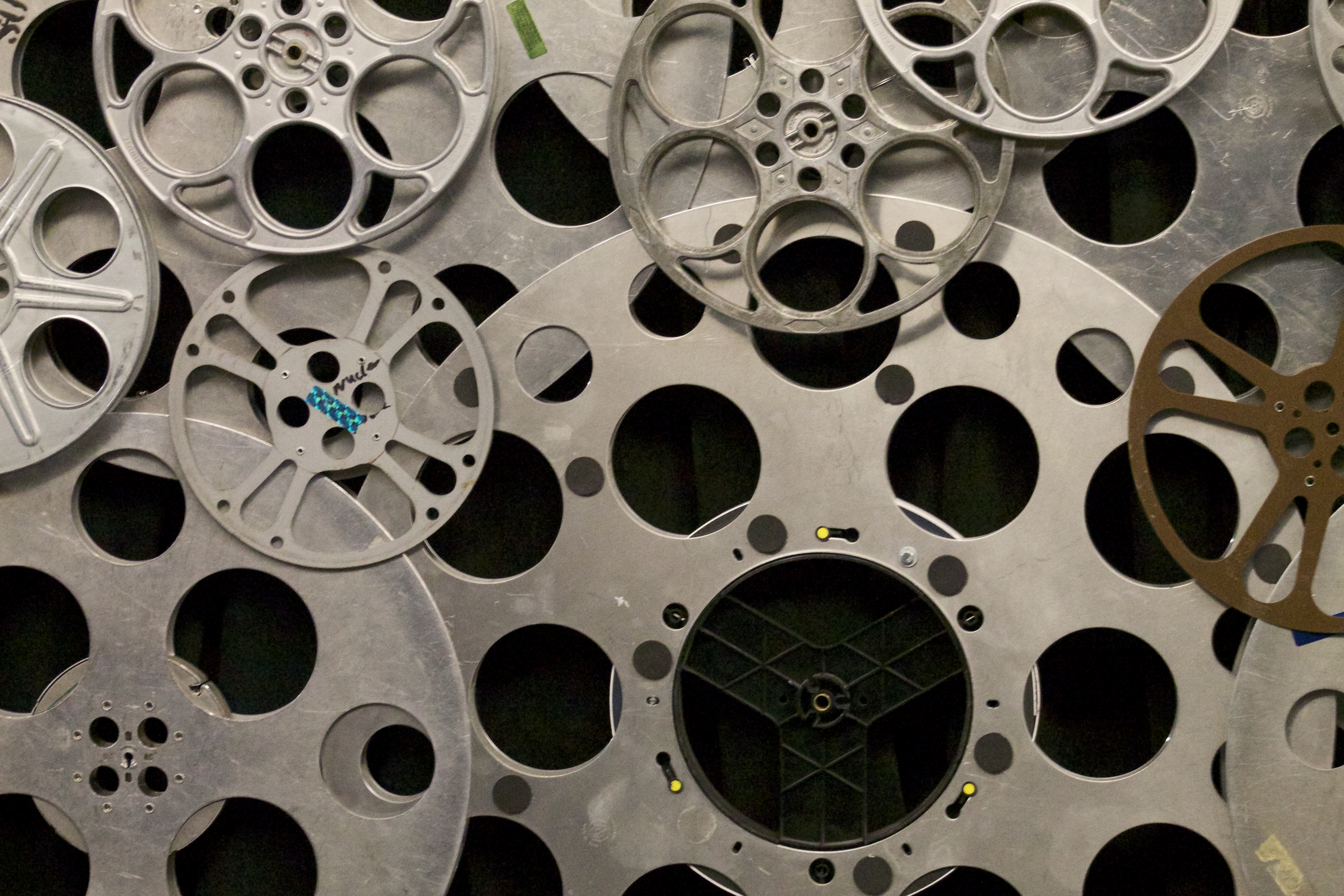 Rebecca Lyon: It’s a strange time to be involved in film projection. Theaters began switching over to digital around 2010, and by 2012 you’d be hard-pressed to find a venue that was still running film as their primary format. But along with this monumental change, a lot of theaters started to realize that there’s an audience that actually cares about seeing things on film. As something grows scarcer, it becomes more special and then people become more vocal about wanting to see it. You start to see theaters with multiple screens that have transitioned to digital projectors decide to keep film projectors on one screen. You start to see venues taking their platter systems out and replacing them with two projectors, so they can run films reel-to-reel instead of having to build them up onto one giant platter. Screening films this way is one of the main requirements of most archives. What you end up with is that film projection is no longer the norm, but it’s still a big part of the draw for certain venues. And it’s often something that sets them apart from your run-of-the-mill all-digital multiplex. So, for the projectionists and the technical directors, the job has become more like art handling. Ten years ago, if you put a huge scratch down the middle of a print of “Mamma Mia!” the studio wouldn’t have cared, because there were a thousand other prints. When we screen “Mamma Mia!” now, it’s a studio vault print and if you scratch it, someone will notice. You’ve done permanent damage to something of which there are very few left on earth, and you may never get a print from that studio archive again. And you’ll want to crawl under a rock and die.

Kyle Westphal: For our first few years, we had difficulty keeping a stable venue for reasons beyond our control: landlords, liquor licenses, HVAC breakdown. It’s gratifying that CFS has been able to expand its programming. We’re now in our fourth year of residence at NEIU and it continues to be a great place for us to present an eclectic line-up. We know there are folks who come every week, regardless of what’s showing, and we try to be conscientious about that. We deliberately give people something different every week—here’s a pre-Code film, and next week is a 1970s Western, and the week after that is a Taiwanese film from the 1990s. The NEIU Communications, Media and Theatre department, which sponsors our program, is going to offer a cinémathèque course, which uses our series as a springboard to discuss film history and archival research. The idea that students can receive academic credit for seeing “Truck Turner” in 35mm warms my heart.

Rebecca Lyon: Chicago has a strong community of people working in film exhibition, and while it can feel overwhelming to think of all the obstacles a venue running film these days is facing—especially if they want to do it well, which they should—I think about how far CFS has come just teaching ourselves this stuff, and from learning from all these very talented and knowledgeable film people that Chicago is lucky to have. So these workshops feel small in the grand scheme of “keeping film alive” but it’s a step in the right direction, and we hope they’ll be a resource for people who’ve been struggling to figure things out on their own.

Cameron Worden: Having a space like Chicago Filmmakers where we can regularly screen 16mm has allowed us to present small-gauge filmmaking in a way that we have only been able to sporadically in the past. “Film” means 35mm to a lot of folks, but there are entire modes of filmmaking that are ignored when you just focus on 35mm feature films. As an organization dedicated to celluloid, we feel an imperative to not only contextualize and screen features that received 35mm theatrical distribution, but also showcase the wide spectrum of cheaper, less visible modes of film exhibition which tend to receive less repertory attention. We were very excited to show a selection of films by Curt McDowell—in gorgeous prints struck from the Academy of Motion Picture Arts and Sciences’ recent restorations last season—in part because a filmmaker like McDowell doesn’t fit into easy repertory programming boxes. He worked primarily in 16mm, had one foot in the experimental film world and another in the porn industry, and has been mostly seen outside of “traditional” theatrical contexts. Demonstrating that the history of film exhibition is as varied and diverse as the history of film itself has always been part of our mission. Screening at Chicago Filmmakers is a natural extension of our programming imperative. Part of why we screen shorts before features is to complicate the feature-based repertory model despite the fact that showing standalone features limits your purview to a sliver of film history.

Rebecca Lyon: I once made a joke to [film scholar] Patrick Friel that not only do we project your films, but sometimes we’ll give you a ride home after the show. That’s a full-service film projectionist.