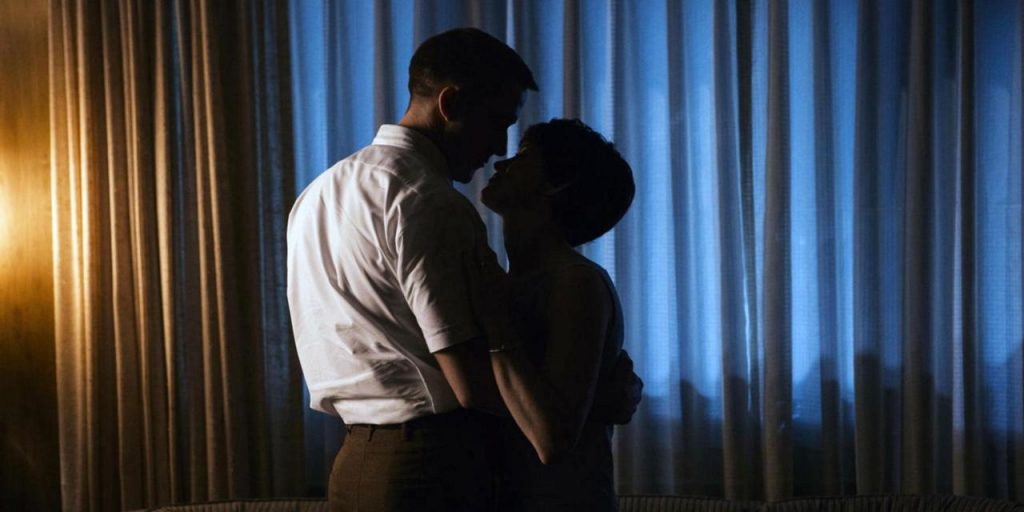 Neil Armstrong steps away. Apart from the crew, the crowd, the fray. Armstrong pauses, looks for calm. He does this a lot in Damien Chazelle’s portrait of loss, mourning, grief and solitude, “First Man.” Several times he lifts his chin, face plain, toward the night sky, toward a waxing moon, a waning moon, never a full one. Neil Armstrong is apart. A part of a huge apparatus, as well, on track to the Apollo 11 mission to the moon, but that is not what interests director Damien Chazelle and screenwriter Josh Singer (“Spotlight,” “The Post”). Armstrong loses someone he loves dearly, and fears loving again in such measure. Ryan Gosling goes deeper into his incarnation of the charismatic mask: the Gary Cooper face that is still, sometimes stock-still, yet always a fraction of a hair from bleakest melancholy. Gosling’s expression in a word: bereft. The trajectory of the space program is strewn with deaths. “First Man” hasn’t fully announced its form until around the middle, where the camerawork calms and we watch the preparations for a test for the first Apollo mission that ends in sparks and fire and death. (The repeated shot on either end of that scene is as terrifying as the black airless void itself.)

Loss. Further loss. Armstrong’s resolve. Armstrong’s silence. Armstrong’s PTSD. Gosling’s face. This is where “First Man” tightens the bolts. You can walk on the moon and return home alive but can you face your purest fear, to love in spite of the greatest danger, loss of those you work with, live with, love?  Chazelle’s accomplishment is to restore that single letter, “a”—so small; everything; this piercing movie—which Armstrong left out when he said, “one small step for man,” rather than the planned “one small step for a man.” Claire Foy, as Janet Armstrong, is also kept close to camera, and multiple times barefoot and innocent in long shot, eyes always wide and hopeful, fearful. The gestural strength Chazelle draws from close-ups of Foy is immense, from the slightest turn of her head, from a trickle of fingers, from a canvas of freckles and resolve. Mid-afternoon the day after watching the film, I stopped to think about “First Man” and it hit me like a wall of bricks and I had to sit. I sat awhile. I am sitting now. The cumulative power of Gosling’s performance, of Chazelle’s determination, smothered me. And only now, typing this, does a further wave wash to shore and out again, and it aches, again. Armstrong was a Korean War veteran, like my father, in the Air Force, like my father. Then there was Gosling: silent but not stoic, distant, unaccountable, self-contained, like my father. Thirty-three-year-old Damien Chazelle has captured a generation of men who are leaving us. With Jason Clarke, Corey Stoll, Patrick Fugit, Ethan Embry, Pablo Schreiber, Christopher Abbott, Skyler Bible, Shea Whigham, Kyle Chandler, Ciarán Hinds, Lukas Haas, Cory Michael Smith, Olivia Hamilton, Kris Swanberg. 138m. (Ray Pride)

“First Man” is now playing. It’s worth seeing big and loud; the preview I saw was in IMAX, where tall swathes of the image were marred for much of the running time by light leaks in the auditorium.